"Here is history made vivid…"

The Interior Museum opened on March 8, 1938, within the U.S. Department of the Interior's newly constructed headquarters building in the nation's capital. The museum was a first for an Executive-branch Department and was heralded as an innovative approach to making a large, complex Federal agency more transparent and publicly accessible. 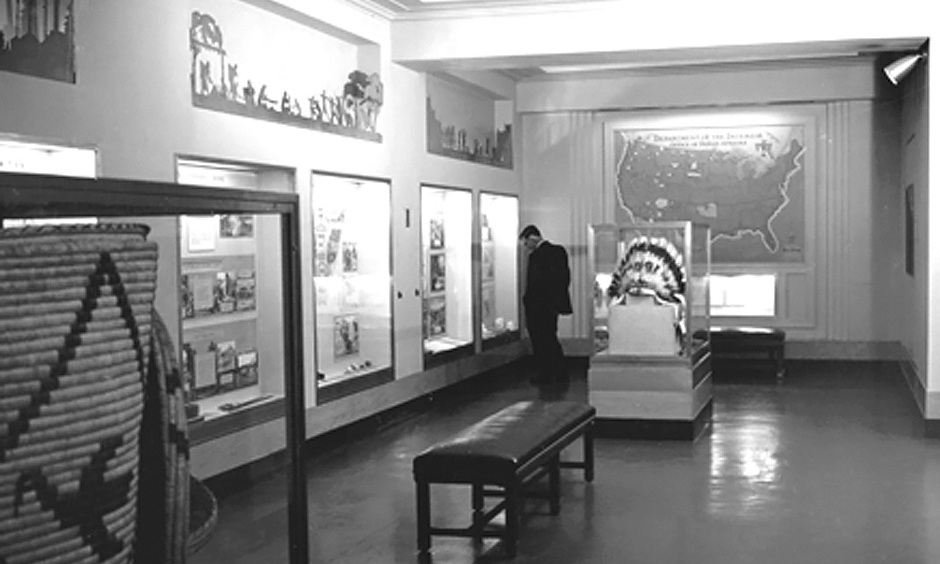 The year is 1935. The U.S. Department of the Interior is growing in its responsibilities yet has outgrown its existing WWI-era headquarters building. Thirty-second Secretary of the Interior Harold L. Ickes (1874–1952) undertakes the ambitious endeavor of creating a new headquarters. Federal Public Works Project No. 4 becomes the first federal building in the nation’s capital to be authorized, planned and constructed under President Franklin D. Roosevelt’s administration. From the outset, the building is to embody the principles of utility and economy: “a new deal for a new day.”

Secretary Ickes realizes that the work of the Interior Department is multi-faceted and difficult for the public to understand. He views the construction of the new headquarters as an opportunity for the Department to be more transparent and relevant to the American people. Consequently, the building is very intentional in terms of its design and what it will include.

One of several elements Ickes specifies is a museum that will present the story of the Department and educate the public. It will join some 67 other museums nationwide already within the Department’s National Park Service but it will be just the twenty-third museum in Washington, D.C.—and unique in a Cabinet-level agency as a “new instrument in the field of government public relations.” To this end, Ickes identifies a first floor wing as the museum's future location and tasks Dr. Carl P. Russell from the National Park Service's Museum Division with the planning. Russell assembles a diversely skilled group of curators, model makers, artists, sculptors, and administrators. By May 1935—just as initial construction is beginning on the headquarters itself—the Public Works Administration (PWA) allocates $100,000 for the Interior Museum.

The museum's soft opening occurs on Tuesday, March 8, 1938, at 8:00 p.m with a formal reception attended by internal stakeholders, politicians, cultural leaders, and other officials. The public grand opening is held the next morning. Highlighted in all the invitations and press materials are the “striking exhibits” showing the “manifold activities” of the Department's bureaus and offices. The publicity touted nearly 8,000 square feet showcasing 95 exhibit units, 1,000 objects, nearly 500 photographs, 250 maps and charts, 100 models, 12 large wall maps and countless text panels.

While the Interior Museum's collections have grown, and appearances have changed since 1938, the museum's mission has remained the same: to inspire and educate employees and visitors about the Department's ongoing stewardship of the nation's public lands, heritage, and natural resources.