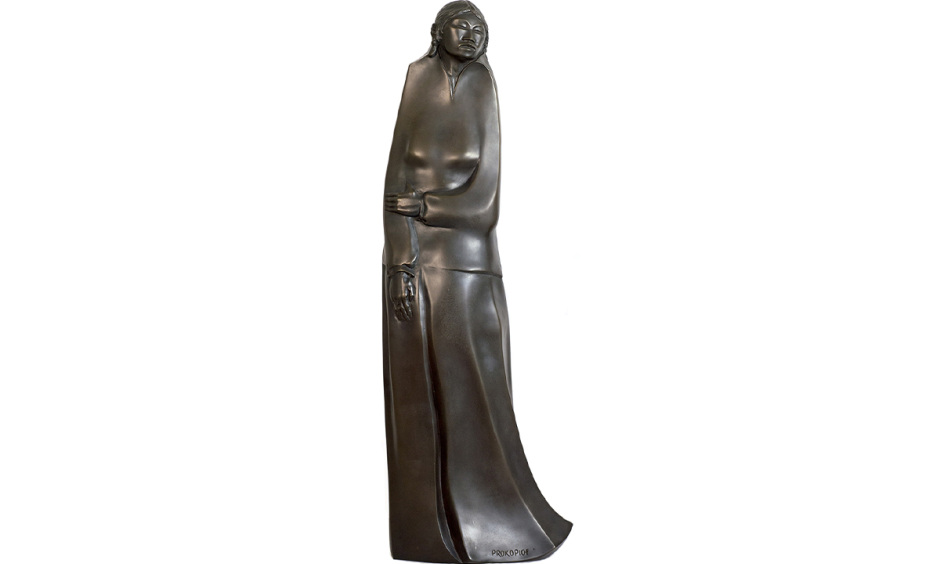 With today's popular Indian art moving into the fine arts market, I am thankful for my ancestry from which I draw my inspiration.  There's a rush to explore yesterday's line with today's media; therefore I extend myself in many varied directions.  It is my responsibility to keep art, talent and salability in their proper perspective.

In 1964, Prokopiof was recruited to join the newly-established Institute of American Indian Arts (IAIA) in Santa Fe, New Mexico, where he continued his jewelry studies and began making sculpture (Koster 1996).  Upon graduation in 1966, he completed post-graduate work at the IAIA with renowned sculptor Allan Houser (Chiricahua Apache).  Houser encouraged the young artist to refine his work and continue with his art studies, and during 1967-68 Prokopiof studied sculpture and design at the San Francisco Art Institute (Giles 1998).

During his time in Santa Fe, Prokopiof forged many friendships and professional working relationships with other Native American artists whom he met and studied with, including T.C. Cannon (Kiowa/Caddo), Benjamin Harjo, Jr. (Seminole/Shawnee), Dan Namingha (Hopi), and others.

Prokopiof experimented with various themes and materials over his career.  Initially, his sculptural works focused on Southwestern themes.  Later, Prokopiof returned to his Alaska Native roots, producing sculptures related to his Unangan heritage.

The sculpture featured here is entitled Gallup Throw (1982, 27", bronze).  It appeared on the cover of the 1985 exhibition catalog entitled Begay and Prokopiof, a show held at the Indian Arts and Crafts Board's Southern Plains Indian Museum (SPIM), featuring the works of Navajo weaver D. Y. Begay and Prokopiof.  Today, this sculpture is housed in the permanent collections of the SPIM (A.82.9), in Anadarko, Oklahoma.

Over the course of his career, Prokopiof received many prestigious awards, including two Grand Awards at the Red Earth Festival, Oklahoma City, in 1989 and 1990, respectively; and Best of Show, Eiteljorg Museum, Indianapolis, in 1995 (Giles 1998).