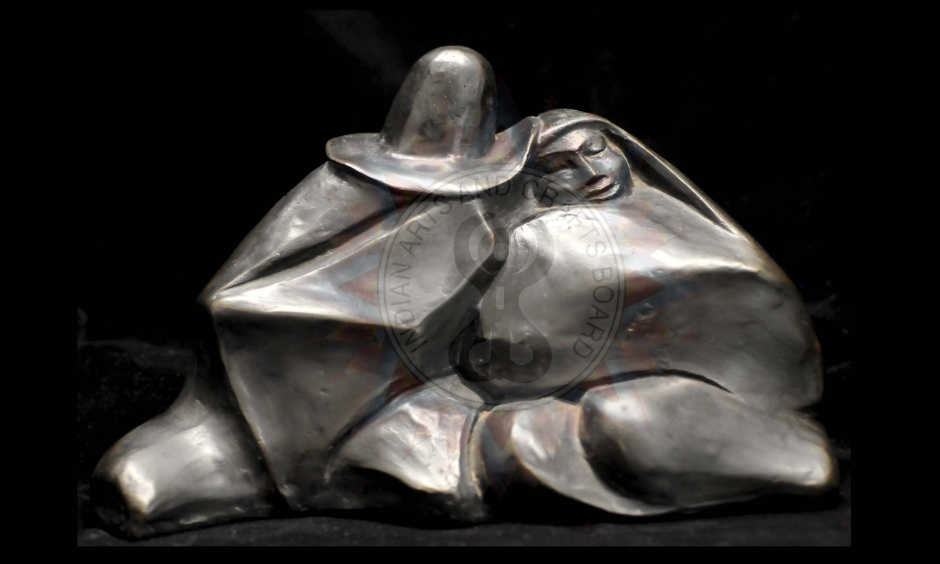 Allan Houser (Chiricahua Apache, 1914-1994) created dramatic sculptures that are lyrical and capture the inner presence and spirit of Apache dancers, female figures, and other important images drawn from his childhood memories of stories told and songs performed by his father.

Born near Apache, Oklahoma, Houser was raised to be a cattleman on his family ranch. Ranching was a struggle in the Depression years, and it was necessary to work long days to make ends meet. To break up the monotony, Houser said, "[o]ccasionally, I would sit down and sketch something.  Once, I used a pocket knife to carve a figure out of red cedar.  It was of a man kneeling, hands on knees, as if singing a tribal song" (Katz 1980:103).

Houser eventually graduated from the Chilocco Indian High School in Newkirk, Oklahoma, and later attended the Santa Fe Indian School in New Mexico where he was introduced to Dorothy Dunn and the Studio School in 1934.  Houser was trained as a painter and was one of several Native American artists selected in 1938 to create murals for the newly constructed Department of the Interior building, Washington, D.C.  He later turned to sculpture during WWII while living in Los Angeles.

Houser recalled: "In my spare time I went to the Otis Art Institute.  I didn't attend classes, but I studied the sculpture there.  I met a sculptor who encouraged me, told me what tools I needed, got me interested in stone....Suddenly, I saw myself involved in the creative process.  I began experimenting and saw that anything was possible" (Katz 1980:104).

Houser began teaching art in 1951 and eventually joined the faculty at the newly established Institute of American Indian Arts, Santa Fe, in 1962.  During and after his tenure at the Institute, he helped inspire, mentor, and launch the artistic careers of many generations of Native American artists.

Houser completed Morning Song (bronze, H. 7”, A-72-102) in 1971.  In describing the work he stated:  "I did a piece in bronze called Morning Song.  An older couple has danced the Apache Back and Forth, a social dance, most of the night.  Now they sit and listen as the singers sing the morning song around the drums and the sun comes up.  They're tired: They're in repose" (Katz 1980:107).