TREASURES OF THE IACB: T.C. CANNON, WHO SHOT THE ARROW, WHO KILLED THE SPARROW (1970) 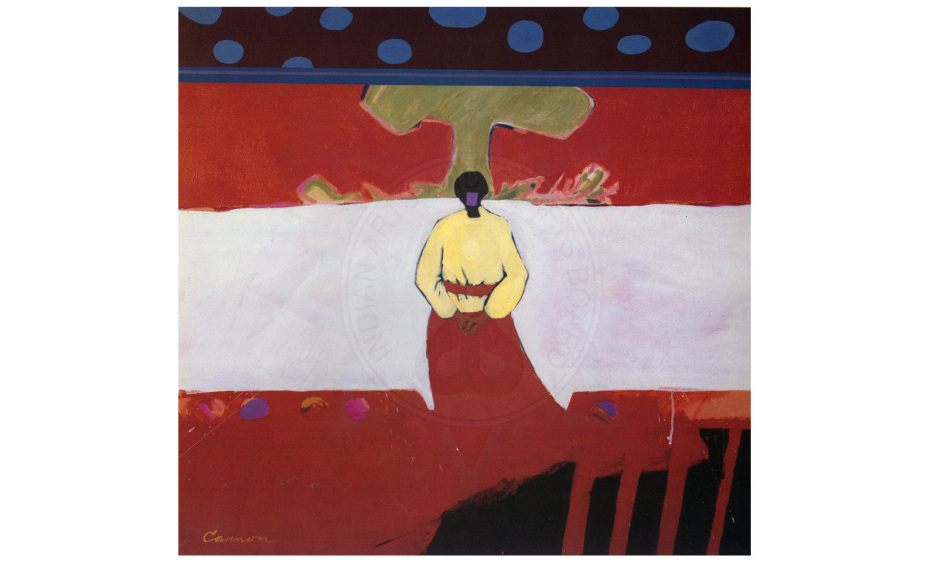 Tommy Wayne (T.C.) Cannon (1946-1978) was a progressive artist with unprecedented talent.  Enrolled Kiowa, and of Caddo heritage, Cannon was born in 1946 in Lawton, Oklahoma, and spent his youth in Gracemont, and around Anadarko, Oklahoma.  Although he lacked formal art instruction, during high school Cannon drew and painted, placing “first” at regional art contests sponsored by the Southwestern Oklahoma State College (Frederick 1995:15).  In Anadarko, Cannon was exposed to a large variety of Native American art, frequenting the Indian Arts and Craft Board’s (IACB) Southern Plains Indian Museum (SPIM) and other locales featuring murals by the Kiowa Five and other artists.

Cannon began selling his work in 1962 at the Oklahoma Indian Arts and Crafts Cooperative housed in the SPIM. After winning several art awards at the annual American Indian Exposition in Anadarko, he contemplated his future as a full-time artist (Frederick 1995:16).

After high school graduation, Cannon obtained a scholarship to attend the newly established Institute of American Indian Art (IAIA) in Santa Fe in 1964.  Here, he received instruction from Fritz Scholder (Luiseno) and inspiration from his fellow artists. Early on Cannon challenged the parameters of “Indian” art with a Pop Art sensibility, incorporating flat and intense colors, dynamic compositions, and decorative motifs.

Following graduation from IAIA, and a brief period of studies at the San Francisco Art Institute, in 1966 Cannon enlisted in the U.S. Army and eventually served in Vietnam through 1968.  He received two Bronze Stars and other commendations for his actions, and memories of war came to inspire future works.

Prior to his honorable discharge from the U.S. Army in 1968, the SPIM selected Cannon’s works to be included in a large IACB traveling show entitled Contemporary Southern Plains Indian Art.  This was followed in 1971 by the first comprehensive Cannon exhibition, Paintings and Graphics by T.C. Cannon, held at the SPIM.   One of his most notable paintings, Who Shot the Arrow, Who Killed the Sparrow (1970, 40” x 36”, acrylic on paper on canvas, A.71.41), was included in the exhibition.  Here, Cannon employed the mushroom cloud as a symbol of war and unstoppable Western technology that threatened the beauty of Native American life and culture (cf. Wallo and Pickard 1990:104).

Though Cannon’s career was cut short, his rich artistic legacy continues to inspire new generations of contemporary Native American artists.  Cannon observed: “Contemporary Indian painting is an ever-expanding field full of infinite directions and countless rewards and dreams…I dream of a great breadth of Indian art to develop that ranges through the whole region of our past, present, and future” (SPIM 2003).