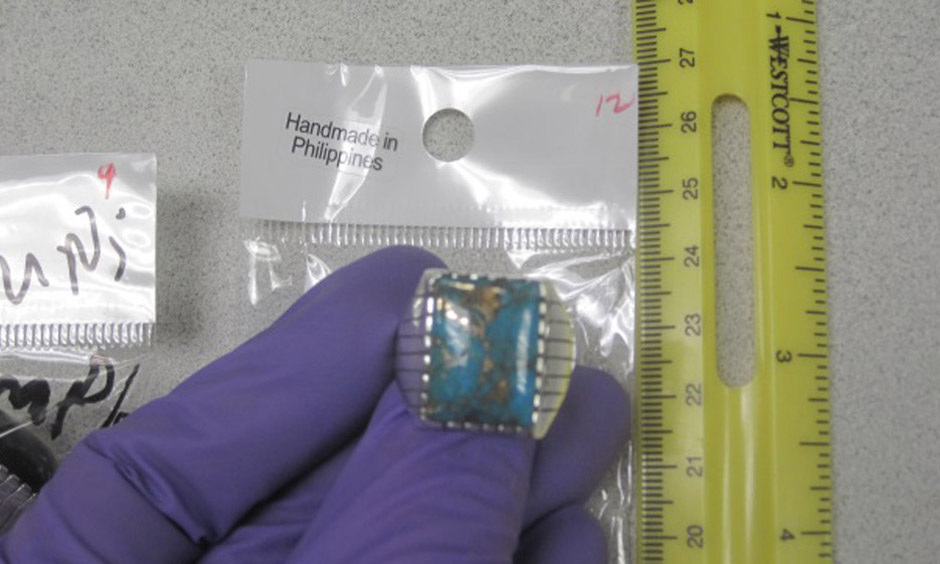 into Alleged Violations of the Indian Arts and Crafts Act

ALBUQUERQUE – A federal grand jury sitting in Albuquerque, N.M., returned an indictment on Tuesday charging five individuals with violating the Indian Arts and Crafts Act (IACA) by conspiring to import and fraudulently sell Filipino-made jewelry as Native American-made.  This is the second indictment filed as the result of a continuing federal investigation that began in Jan. 2015 and is led by the U.S. Fish and Wildlife Service, with the assistance of the FBI and Homeland Security Investigations (HSI).  The investigation targeted an international scheme to violate the IACA and has included the execution of eight search and seizure warrants and investigative activity in New Mexico, California, Alaska, Kentucky, Nevada and the Philippines.

“The indictments filed as a result of this continuing investigation are not only about enforcing the law, but also about protecting and preserving the cultural heritage of Native Americans,” said U.S. Attorney Damon P. Martinez.  “The cultural heritage of American Indians is a precious national resource and it is critically important that we provide the proper respect to those whose creations are seen by some as simple retail commodities to be exploited for profit.Eliminating the flow of counterfeit Native American art and craftwork provides a level playing field for the highly talented, dedicated, and hard-working producers of genuine Native American art.”

“The indictment we announce today is the result of the largest investigation ever into fraudulent Native American jewelry sales under the IACA,” said U.S. Fish and Wildlife Service Special Agent in Charge Nicholas E. Chavez.  “We hope the charges filed as a result of this continuing investigation will deter this criminal activity, and we thank the law enforcement agencies that supported us and partnered with us during this investigation.  Through these investigations, the U.S. Fish and Wildlife Service endeavors to protect and preserve the authenticity of jewelry produced by our country’s Native American artisans as it fulfills the commitment of the Secretary of the Department of the Interior to enforce this important law.”

FBI Special Agent in Charge Terry Wade said, “The FBI is proud to have worked with the U.S. Fish and Wildlife Service and the other agencies involved in this important investigation.  Protecting the rich cultural heritage of Native Americans and other groups in this country is not just a law enforcement responsibility, it is the right thing to do.”

“HSI’s role in this investigation is another example of our commitment to protecting the intellectual property and cultural patrimony of Native Americans,” said HSI Special Agent in Charge Waldemar Rodriguez. “We will continue to support and assist our federal, tribal and local partners through the use of our cross border authority.”

·         Imad Aysheh, 41, formerly of Gallup, N.M., who is identified as the owner and operator of Imad’s Jewelry, a jewelry manufacturing business in the Philippines;

·         Iyad Aysheh, 45, of Lodi, Calif., who is identified as the CEO and agent for IJ Wholesale, Inc., a California corporation that imports jewelry into the United States;

·         Raed Aysheh, 39, of American Canyon, Calif., who is identified as the owner and operator of Golden Bear & Legacy, LLC, a retail store in Calistoga, Calif., that specializes in Native American-style jewelry.

According to the indictment, from March 2014 through Oct. 2015, these four defendants conspired, to violate the IACA by displaying and offering for sale jewelry that was manufactured in the Philippines in a manner that suggested that it was Indian produced and the product of American Indian tribes.  The indictment also alleges that these four defendants conspired to defraud the United States and its people of money by using the U.S. mail and wire communications to promote the importation and sale of the Filipino-made jewelry as Indian-made, and to launder the proceeds of those unlawful sales.

The indictment identifies 40 specific acts allegedly taken by the defendants in furtherance of the conspiracy, including several sales of the Filipino-made jewelry to individuals who were told that they were purchasing Indian-made jewelry in jewelry stores in Albuquerque and Santa Fe, N.M.  It also identifies more than 50 financial transactions allegedly conducted by the defendants between April 2014 and Oct. 2015, involving more than $300,000, in amounts ranging from $1,100 to $60,000, in furtherance of the conspiracy.

Iyad Aysheh separately is charged with violating the IACA in Santa Fe County in the summer of 2015, by selling jewelry valued at more than $1,000 that was represented as Indian-made while knowing that the jewelry was not an Indian product.

A fifth defendant, Nael Ali, 53, of Albuquerque, who is identified as the owner and operator of Gallery 8 and Galleria Azul, two arts and crafts retail stores in Albuquerque’s Old Town, also is charged with violating the IACA in Bernalillo County in Oct. 2015.  Ali is not charged in the conspiracy count.

The indictment includes forfeiture provisions which seek to forfeit to the United States any proceeds used in or traceable to the defendants’ alleged criminal activities.  The indictment also seeks forfeiture of $20,109 in cash, $6,723.04 in a bank account, and more than 1,000 pieces of Indian-style jewelry seized pursuant to search and seizure warrants during the investigation.

The five defendants will be served with summonses requiring them to appear in federal court in Albuquerque to be arraigned on the indictment.  If convicted of the charges against them, the defendants each face a statutory maximum penalty of five years in prison and a $250,000.00 fine.  Charges in indictments are merely accusations and defendants are presumed innocent unless found guilty in a court of law.

Nael Ali previously was charged in the first indictment filed as a result of this continuing investigation.  That first indictment, filed in Oct. 2015, charged Ali and Mohammad Abed Manasra, also of Albuquerque, with conspiracy to violate the IACA and three substantive violations of the Act.  Ali and Manasra have entered not guilty pleas to the charges against them and are presumed innocent unless convicted.  Both are awaiting trial, which is scheduled for April 24, 2017.

The IACA prohibits the offer or display for sale, or the sale of any good in a manner that falsely suggests that it is Indian produced, an Indian product, or the product of a particular Indian and Indian tribe.  The law is designed to prevent products from being marketed as “Indian made,” when the products are not, in fact, made by Indians.  It covers all Indian and Indian-style traditional and contemporary arts and crafts produced after 1935, and broadly applies to the marketing of arts and crafts by any person in the United States.  IACA provides critical economic benefits for Native American cultural development by recognizing that forgery and fraudulent Indian arts and crafts diminish the livelihood of Native American artists and craftspeople by lowering both market prices and standards.