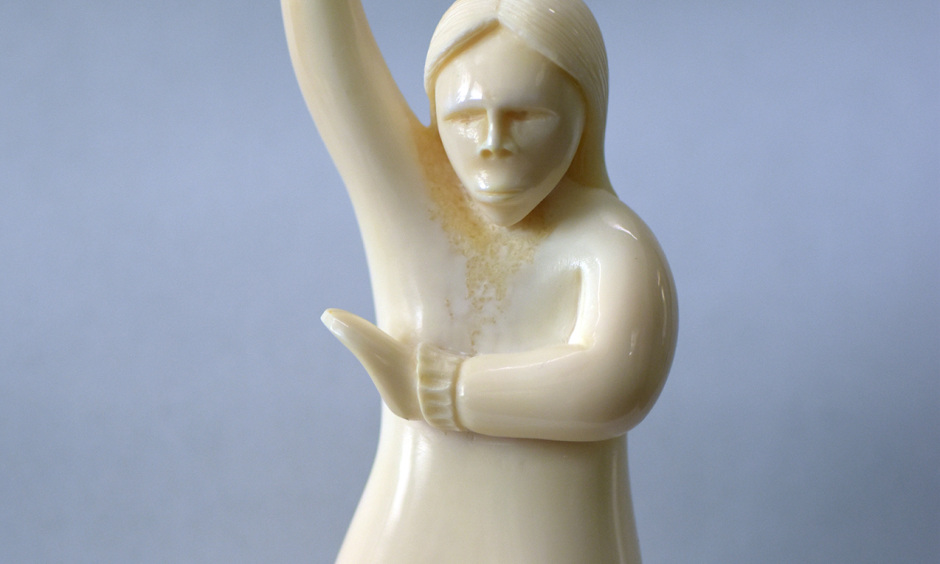 SONG OF THE SEA: CARVINGS OF ST. LAWRENCE ISLAND

RAPID CITY, SOUTH DAKOTA: The Sioux Indian Museum, administered by the U.S. Department of the Interior, Indian Arts and Crafts Board (Board), will host a special exhibition, Song of the Sea: Carvings of St. Lawrence Island. The exhibit features the artwork of Alaska Native carvers Edwin Noongwook, Ike Kulowiyi, and Ben Pungowiyi. The exhibition runs from October 24, 2019 through January 20, 2020. The exhibition is free and open to the public.

St. Lawrence Island, Alaska, has been home to Yupik people and their tradition of ivory and bone carving for thousands of years. Prehistoric carvings served both utilitarian and ceremonial purposes. With the arrival of Euro-American sailors and traders in the nineteenth century, Yupik carvers created decorative pieces for sale and trade. These traditions have continued and evolved to the present day. In addition to highlighting the outstanding work of these three contemporary Yupik carvers, the goal of this exhibition is to enlighten the public about the tremendous cultural and economic importance of Alaska Native walrus ivory and bone carving.

This issue is also addressed in the Board’s Alaska Native Ivory brochure, which clarifies the legal rights of Alaska Natives to harvest walrus and carve and sell walrus ivory and bone art and craftwork, and differentiates their source of economic livelihood from the African elephant ivory ban.

Edwin Noongwook, an enrolled member of the Native Village of Savoonga, first began carving in high school under the tutelage of master carvers such as Alexander Akeya. He further refined his craft with guidance from his friend and fellow carver Ronald Apangalook of Gambell.

Noongwook creates his carvings from baleen and new walrus ivory. He is one of the few Savoonga carvers who regularly creates dynamic human forms, including fishermen, dancers, and hunters. There is a fluid gracefulness to his pieces, capturing the motion of both people and animals in his work.

Ike Kulowiyi, an enrolled member of the Native Village of Savoonga, began carving at the age of 12, learning the art form from his grandfather, Albert Kulowiyi. He left St. Lawrence Island to attend school in Fairbanks, later moving to Oregon and Indiana. Eventually, he returned to Savoonga to help support his family.

As a boat crew captain, Kulowiyi hunts whales and walruses for family subsistence purposes. These activities provide him with great insight into the forms and motions of marine animals, and he conveys this intimate knowledge in his artwork. He is best known for his intricate carvings of whales, seals, underwater scenes, and shamanic transformations.

Ben Pungowiyi, an enrolled member of the Native Village of Savoonga, is a skilled carver whose artistic career began at age 6 under the tutelage of his grandfather, Donald Pungowiyi. As he progressed through elementary school, his father Ivan Pungowiyi and Edwin Noongwook the elder helped him further develop his skills. After attending high school in Fairbanks, Ben joined the army, eventually returning to his home in Savoonga in 2006.

To read the press release, please visit this link.

The Sioux Indian Museum, managed by the U.S. Department of the Interior, Indian Arts and Crafts Board, is located in The Journey Museum, 222 New York Street, Rapid City, SD 57701. For admission fees and hours of operation please call (605) 394-6923.