As a result of the General Allotment Act of 1887, reservation land was divided up and allotted to individual Tribal members. After the death of the original allottee owner, title ownership was divided up among the heirs. As the land passed through each generation, the number of owners grew exponentially, resulting in the highly fractionated ownership of much Indian land today. The map below, created by the U.S. General Land Office in 1876, shows part of the Sioux Reservation in green (pursuant to the 1868 Treaty of Fort Laramie) before allotment. 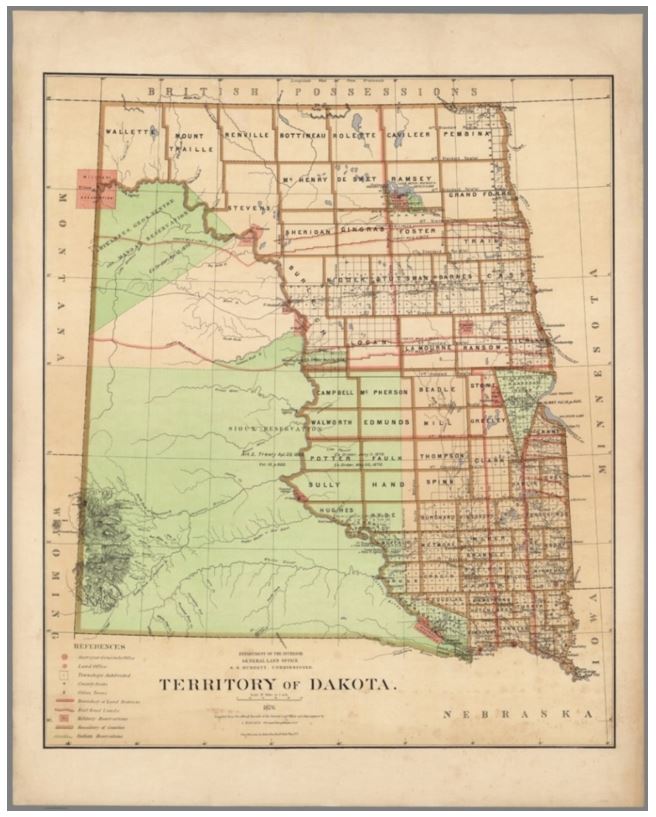 The map of the Rosebud Sioux Reservation below illustrates how part of the Tribal treaty land base was carved into thousands of individual allotted tracts by 1903. Although the allotted land is not divided physically, meaning heirs receive an undivided interest in the land, the children, spouses, and other relatives of the original and successive landowners inherit increasingly smaller interests in the land. As a result, fractionation of the ownership interests has grown exponentially over generations. Many allotted tracts now have hundreds of individual owners. For example, a tract on the Lac Courte Oreilles Reservation has more than 1,200 owners. The Federal allotment policies ended with the Indian Reorganization Act of 1934, which helped strengthen Tribal sovereignty by increasing Indian self-governance and responsibility. 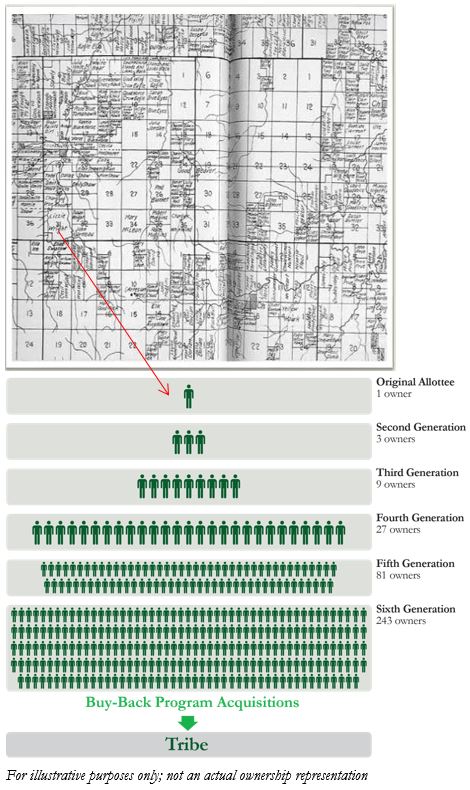 Fractionated ownership and the checkerboard nature of land ownership patterns (i.e., trust lands, fee lands, and lands owned by Tribes and individuals throughout a reservation) cause major challenges for Tribes that impact their ability to exercise Tribal sovereignty and self-determination. Specifically:

There are approximately 150 locations across Indian Country with nearly 100,000 fractionated tracts held in trust1 or restricted status2. There are 2.5 million fractional interests associated with these tracts, owned by more than 243,000 landowners. Nearly 98 percent of these interests are less than 25 percent ownership.

The table below provides an overview of the scope of fractionation across the relevant Bureau of Indian Affairs (BIA) regions, as of December 31, 2018.

More information about the specific number of fractionated tracts and interests by location can be found in the Fractionation and Resource Code Statistics Report.

1. Trust land is a land ownership status in which title is held in trust by the Federal Government with restrictions on use and disposition of the land. Trust land is eligible for Buy-Back purchases.

2. Restricted land, or restricted fee land, is a land ownership status in which an individual or Tribe holds title, but there are restrictions on use and/or disposition of the land.  Additional analysis and reviews are required for Buy-Back Program offers on restricted land.