TREASURES OF THE IACB: FRITZ SCHOLDER, INDIAN WITH CAT (1973) 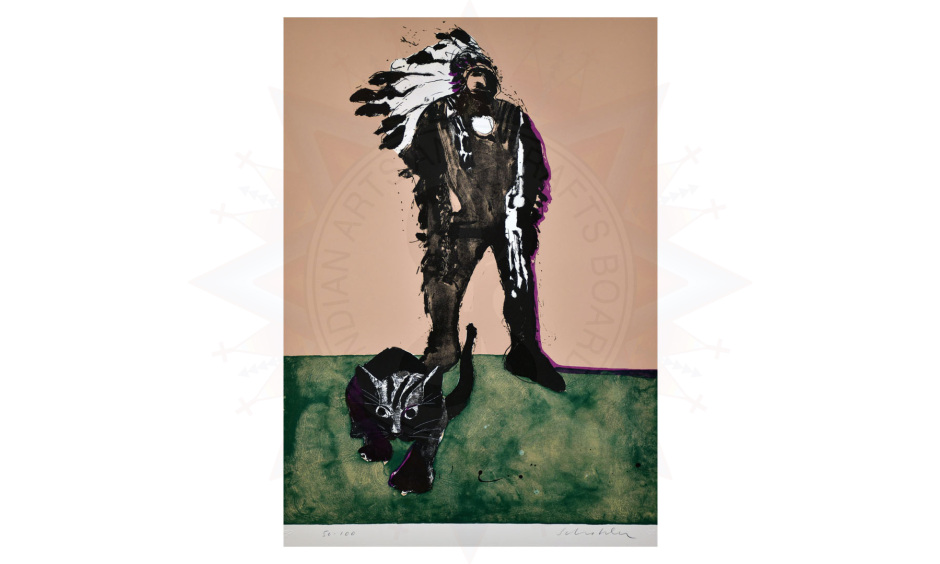 Fritz Scholder (1937-2005) was an artist who became a leading figure in the contemporary American Indian art movement of the twentieth century.  An enrolled member of the La Jolla Band of Luiseño Indians, Scholder was born in 1946 in Breckenridge, Minnesota.  His father was an administrator of a local Bureau of Indian Affairs school and from early childhood Scholder was drawn to art, winning first prize for a poster he created in the fourth grade.

When the family moved to South Dakota, Scholder’s high school art teacher was Oscar Howe, the noted Sioux painter, who introduced him to modern painting (Breeskin 1972:17).  Scholder continued his art studies during 1957-1958 at Sacramento Junior College (now Sacramento City College) under the instruction of noted artist Wayne Thiebaud, who influenced Scholder’s early ideas on coloration.  At Sacramento Junior College, Scholder held his first solo show in the art gallery of the campus library and sold his first painting, and subsequently his work was shown throughout the region.  In 1958, Scholder obtained an Associate of Arts degree.

In 1960, Scholder was granted a Bachelor of Arts degree from Sacramento State College (now California State University, Sacramento).  Following graduation, he continued with his studies as a Masters of Fine Arts student at the University of Arizona.  As a graduate assistant, Scholder taught design and drawing classes in Tucson. After completing his degree in 1964, he began teaching Advanced Painting and Contemporary Art History at the newly formed Institute of American Indian Arts (IAIA) in Santa Fe, New Mexico (Ibid.).  In Santa Fe, Scholder mentored a new generation of  American Indian artists, including T.C. Cannon.  Although Scholder did not paint an American Indian subject until 1967, he and Cannon became notable for addressing Indian stereotypes through a mix of figurative and pop influences culminating in challenging and colorful works that deconstructed the romantic vision of American Indians.  Scholder resigned from the IAIA in 1969, and after a tour of Europe and North Africa he returned to Santa Fe.

In 1970, the well-known Tamarind Lithography Workshop, Inc., relocated from Los Angeles to Albuquerque to become the internationally recognized Tamarind Institute within the University of New Mexico.  Upon their invitation, and to explore a new medium, Scholder began work on his first major project consisting of a large suite of lithographs entitled INDIANS FOREVER (Adams 1975).  In 1972, Northland Press published a series of these early lithographs as SCHOLDER / INDIANS (Monthan 1972).  A year later, Indian with Cat was created, and later acquired by the Indian Arts and Crafts Board (IACB).  Today, this lithograph is housed in the collection of the IACB’s Sioux Indian Museum in Rapid City, South Dakota (R 99.1.255).

Scholder said of these works: “The lithographs have become an important part of the work.  As a painter-printmaker and fetish maker…I revel at being able to produce statements in various forms. In today’s world, love, art and magic are greatly needed” (Adams 1975:n.p.).