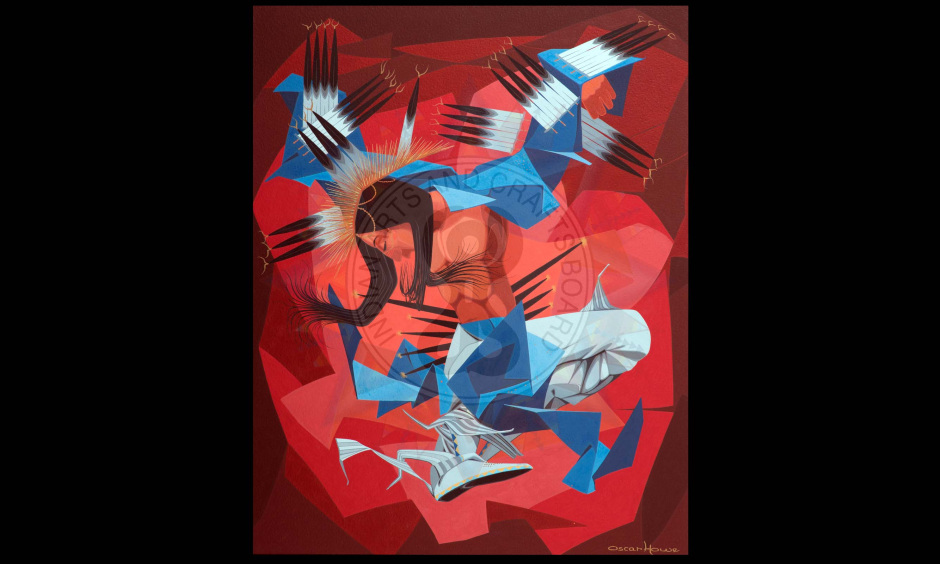 Oscar Howe (Yanktonai Sioux, 1915-1983) was born on the Crow Creek Indian Reservation in South Dakota.  A descendant of hereditary chiefs Bone Necklace and White Bear, Howe was deeply influenced by his maternal grandmother Shell Face from whom "I learned all the symbols of the Sioux Tribes.  It is these symbols I use in my pictures" (Pennington 1961:9).

As a youth, Howe was plagued by various illnesses.  After contracting tuberculosis, he was sent to the Santa Fe Indian School in New Mexico.  There, he enrolled in Dorothy Dunn’s Studio School and learned formal painting techniques.  After leaving the Studio, he achieved recognition for his paintings of Sioux traditional dances and other cultural practices, receiving several mural commissions in South Dakota.  His career was put on hold in 1942 when he was drafted into the U.S. Army during WWII. During the following three years in Europe, Howe was exposed to new styles in painting that would later come to refine his work.

After WWII, Howe continued his art studies, earning a BA and MFA in painting at Dakota Wesleyan University and the University of Oklahoma, respectively. He also began teaching fine art at the University of South Dakota in 1957, a position he held until his death.  In the 1950s Howe pioneered innovative forms of Native American painting that incorporated abstract explorations of planar space, Sioux symbolic geometries, and experiments in Cubism (Libhart 1970:23).  In turn, this new modernist style contributed to the move of Native American painting beyond the more traditional and stylized techniques of the time.  It also inspired future generations of emerging Native American artisans.

Howe wrote: "Who ever said that my paintings are not in traditional Indian style has poor knowledge of Indian art indeed. There is much more to Indian art than pretty, stylized pictures...Are we to be held back forever with one phase of Indian painting, with no right for individualism, dictated to as the Indian always has been...Well, I am not going to stand for it" (Dockstader 1982:19).

Dakota Eagle Dancer (1962) (casein on illustration board, 24 1/4" x 19 1/2", W-62.9) is an outgrowth of Howe's multi-faceted modernist style.  It portrays a colorful three-dimensional traditional dancer whose movements are accentuated by flowing bird plumes, fringes, and bodily contortions.

Howe said: "[My] paintings...are basically Indian in technique but a trend away from the indigenous art; the use of simple linearity and flat patterns expresses the third dimension.  The straight and broken lines derive from quill work and also from old Indian belief that 'a straight line symbolizes unrelenting truth or righteousness'...The Indian likes motion in everything; in action, in his costume.  That is why there were feathers and fringes on everything he wore, for movement as the body moved, for movement in the wind" (Pennington 1961:36, 38).