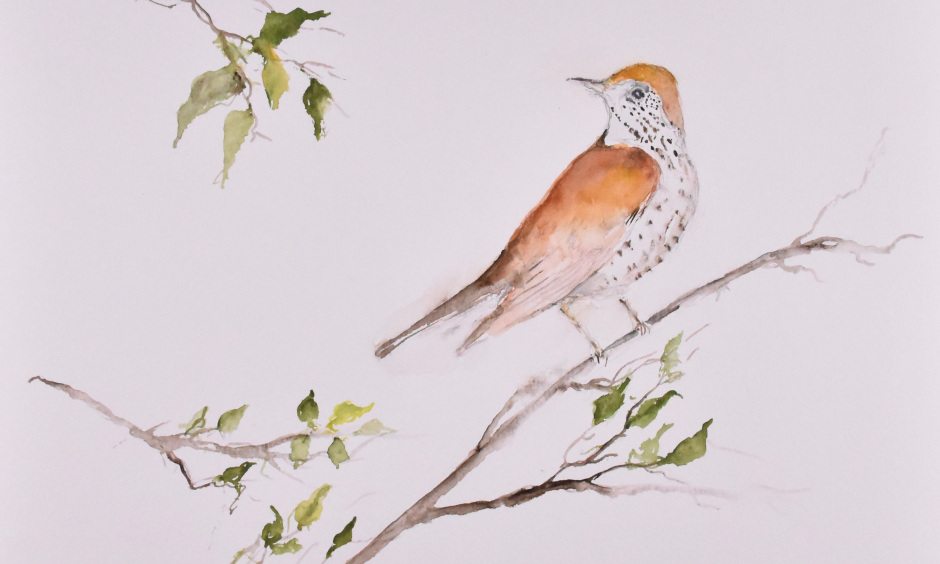 RAPID CITY, SOUTH DAKOTA: The Sioux Indian Museum, administered by the U.S. Department of the Interior, Indian Arts and Crafts Board, will feature an exhibit of watercolor paintings by Arthur Short Bull.  Mr. Short Bull has spent much of the last decade studying and painting the birds native to the Oceti Sakowin (Seven Council Fires) homeland.  As part of this project, he researches and collects the original Lakota names of these birds, and the origin stories behind those names.  The exhibition will run from September 22, 2021 through January 9, 2022.  The exhibition is free and open to the public.

Mr. Short Bull was raised in a traditional family on the Pine Ridge Reservation.  His great-grandfather was Grant Short Bull, uncle to famed artist and historian, Amos Bad Heart Bull and younger brother of He Dog, a companion of Crazy Horses’.  Driven by a desire to help his people, he attended the University of Nebraska at Lincoln and became a substance abuse counselor.  He worked as a counselor for 14 years, until he left the field to pursue his career as an artist.

It was Oglala Lakota artist Andrew Standing Soldier who first told young Mr. Short Bull that being an artist and painter could be a viable career.  Unsure of his talent, he began to experiment with different media, and to seek the advice of more established artists in the Omaha area, where he lived at the time.  After experimenting with acrylic and oil painting, drawing in various media, and clay sculpting, Mr. Short Bull eventually found his voice in watercolor painting.

Searching for a subject to paint, he settled on a theme of the Wounded Knee Massacre, inspired by the Oscar Howe painting, Bigfoot at Wounded Knee.  During a visit to the site of Wounded Knee for the 100th anniversary of the massacre, Mr. Short Bull realized that these victims were not nameless people, and that each had a story to tell.  He decided to do a painting and poem for each person who had been there, those that died as well as those who survived.  The project is ongoing, he has documented over 171 people to date, however it has taken a heavy emotional and mental toll on Mr. Short Bull.  He realized that to make it through this project he would have to learn how to paint other subjects.

In 2006, the bicentennial of Lewis and Clark expedition led Mr. Short Bull to research the expedition and read William Clark’s journals.  He learned that the expedition had killed thousands of animals in the name of science as they “discovered” new species.  This made him angry since he knew these animals were already known to Lakotas, who also had names for them.  It was this knowledge, along with an innate love of nature, that led him to begin painting birds and animals. Using Father Buechel’s Lakota dictionary, Mr. Short Bull began learning the Lakota names of animals.  This led to a rediscovery of his own culture and language, as well as an awareness of how much of the language was lost.  During his research he learned of a story about a man who could understand the songs of the birds, and that they spoke in Lakota.  For this reason, Mr. Short Bull titles all his artwork in English and Lakota and tries to share the stories behind the Lakota names to preserve that knowledge.

Mr. Short Bull has received numerous honors and recognitions including: a 2021 Artist in Residency Fellowship at Crazy Horse Monument, a 2009 First Peoples Fund Business in Leadership Fellowship recipient, and a 2006 First Peoples Fund Cultural Capital Program Fellowship, for a project that utilized his Wounded Knee series of paintings and poems as a vehicle to promote Lakota culture and history.  Agate Fossil Beds National Monument selected Mr. Short Bull to paint one of the official White House ornaments for the 2007 Christmas tree used in the Blue Room.

Prices for the artwork can be obtained by contacting The Journey Museum Store at (605) 394-2201.  To purchase artwork after the exhibit closes, please contact Arthur Short Bull through his website at http://dawnhawk.org/index.html.