CHUUK, MICRONESIA – Doug Domenech, U.S. Department of the Interior Assistant Secretary, Insular and International Affairs, was in Chuuk, Federated States of Micronesia (FSM) this week with a high-level U.S. delegation from Washington, D.C. and U.S. Indo-Pacific Command. They took part in commemorating the 75th anniversary of Operation Hailstone which took place during World War II in the Pacific.

The U.S. delegation had the opportunity to meet with FSM National Government leadership where they discussed issues of mutual interest. They also met Chuuk State Leadership and visited the Chuuk Public Utility Corporation, where a wastewater treatment plant was recently overhauled with funds provided through the Compact of Free Association.

The 75th anniversary of Operation Hailstone commemorates a massive U.S. military strike on Japanese naval forces in Truk following the attack on Pearl Harbor. Beginning on February 17 and 18, 1944, the bombardment of Operation Hailstone played an important part in changing the tide during the WWII battle in the Pacific. Numerous wrecks remain from that important battle and are part of the world renowned wreck-diving site in Chuuk, formerly known as Truk lagoon. 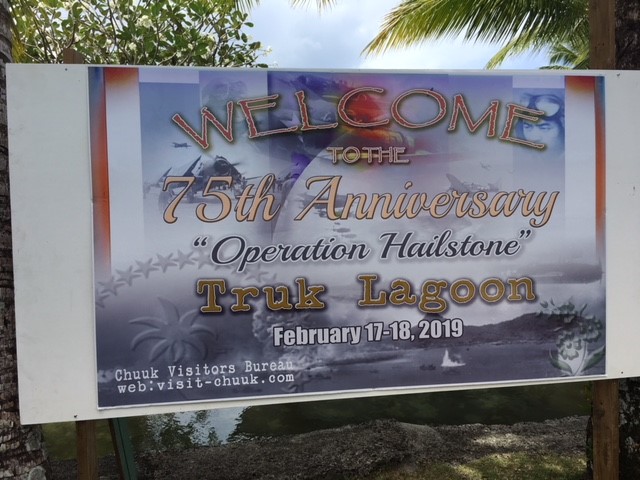 “The Department of the Interior has a long and cherished history with the Federated State of Micronesia,” said Assistant Secretary Domenech. “Through our relationship under the Compact of Free Association, together we have improved and built schools, hospitals, utilities and other projects throughout the FSM that directly benefit the people of the FSM,” Domenech continued. “We are proud of that legacy. We continue to collaborate as partners in the US-FSM Joint Economic Management Committee and will continue to carefully consider future needs as we jointly manage the Compact Trust Fund together.”

The principals of the U.S. delegation traveling to Micronesia, as listed below, were led in the FSM by U.S. Chargé d’Affaires Heather Coble:

The Secretary of the Interior is responsible for coordinating federal policy with respect to the territories of the U.S. Virgin Islands, American Samoa, Guam, and the Commonwealth of the Northern Mariana Islands, and administering and overseeing U.S. federal assistance provided under the Compact of Free Association to the freely associated states of the Federated States of Micronesia, the Republic of the Marshall Islands, and the Republic of Palau. The Assistant Secretary, Insular and International Affairs, executes these responsibilities, on behalf of the Secretary, through the Office of Insular Affairs whose mission is to foster economic opportunities, promote government efficiency, and improve the quality of life for the people of the insular areas.