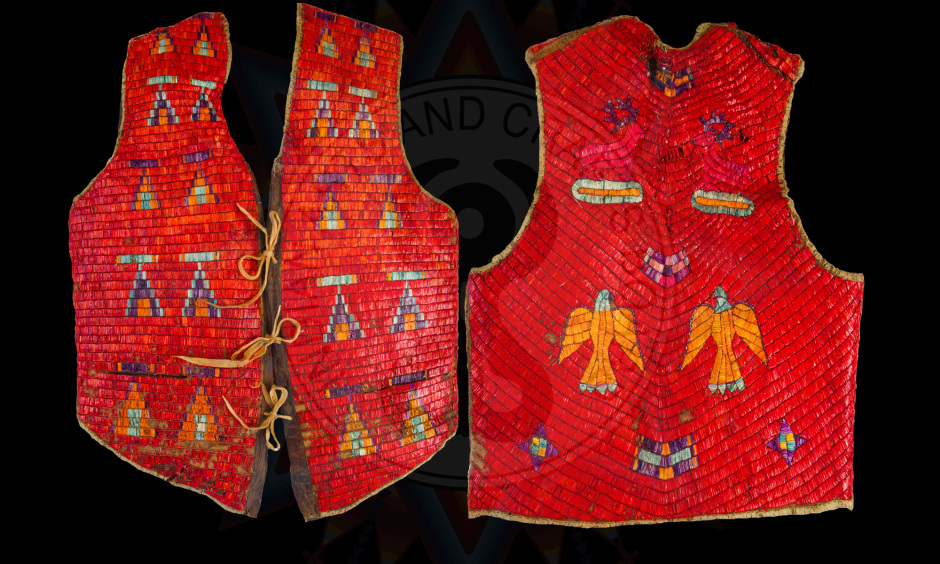 Porcupine quillwork is an art form unique to American Indians (Indians).  It was practiced exclusively by Indian women for hundreds of years before the arrival of Euro-Americans on the Great Plains.  Quillwork commonly decorated traditional shirts, moccasins, and many other forms of material culture.  With the arrival of glass trade beads in the mid-1800s, beadwork began to be used more frequently than quillwork ornamentation.

Not every woman was allowed, or given the right, to quill.  In Oglala Lakota myth, the origin of the practice was related to the spirit Double Woman, who visited women in their dreams and taught them how to use quills. According to Dakota scholar Ella Deloria (1961:55), “The Spirit wanted only certain ones to learn this art, and selected them.” These spiritually-inspired women were asked to decorate ceremonial items used in religious rites, such as for male sundancers.  Eventually quilling societies were formed, and these women regularly met to exhibit and speak about their works.  Quill designs were considered personal property of the creator and were not copied.

Expert quillworkers were highly revered in their respective communities because the art required extreme dexterity, knowledge of natural vegetable dyes for coloring the quills, and mastery of several quilling techniques.  The removal of quills from the harvested porcupine was exacting work, and women sorted and graded four sizes of quills.  Large coarse quills came from the porcupine’s tail and were used for covering large surfaces or wrappings for club handles and pipe-stems.  Medium sized quills were obtained from the animal’s back, smaller quills came from the neck, and the finest, which were used in delicate line work, were removed from the porcupine’s belly (Ewers 1938:59).  Quills of various sizes were kept in bladder containers, usually from an elk or buffalo.

An outstanding example of a Lakota quilled vest is this piece from the Indian Arts and Crafts Board’s Museum of the Plains Indian in Browning, Montana (B.1409).  Vests were not worn by women or girls, and this fully quilled garment was made for a boy or young man.  The front features several panels of tipi motifs, and the back depicts two elk, two eagles, three stars down the center, and two morning stars along the bottom (Growing Thunder 2019:143).  It is possible these motifs represent wishes for the young boy who wore it.  For example, eagle motifs and numerous tipi elements might have been chosen to impart strong leadership qualities and future prosperity, respectively.  This vest is currently on loan to the Minneapolis Institute of Art for their Hearts of Our People: Native Women Artists exhibition, June – August 2019.

Contemporary Indian artists Tim Lammers* (Oglala) and Stephanie Hunter-Sorbel (Oglala), who have been featured in exhibitions at the Indian Arts and Crafts Board’s museums, continue to explore the medium of quillwork in both traditional and experimental forms.  These and other Indian artists employ bold geometric patterning in their works, which is often characteristic of the design style pursued for modern dance regalia.  Floral designs, first adopted during the late nineteenth century, are also featured in many present-day works, while other artists create quillwork portraits of people and animals.

Hassrick, Royal B. 1964. The Sioux: Life and Customs of a Warrior Society. Norman: University of Oklahoma Press.

Lyford, Carrie A. 1940. Quill and Beadwork of the Western Sioux. Lawrence: U.S. Department of the Interior, Bureau of Indian Affairs, Branch of Education.