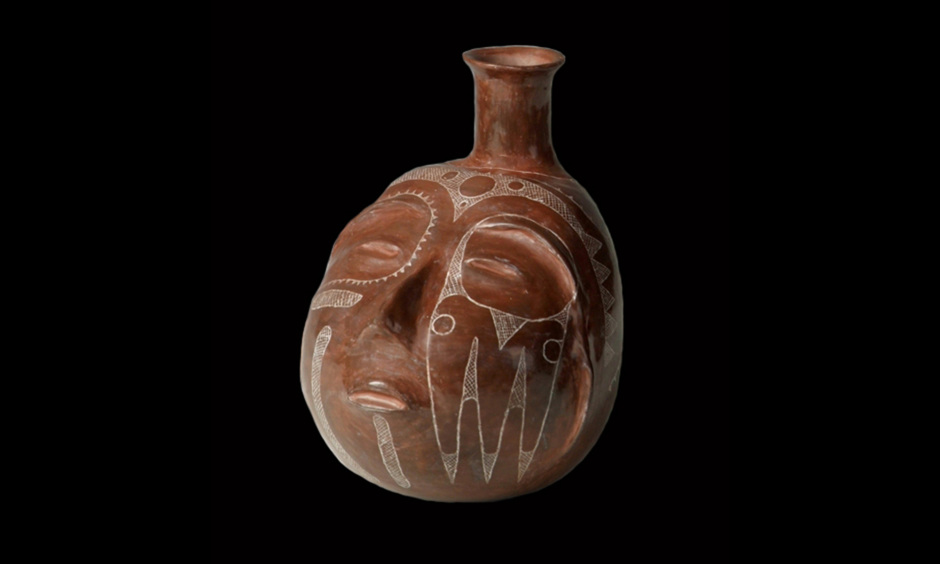 The Caddo were masters working with clay.  The beauty and artistic quality of Caddo ceramics has long been recognized by artists and archeologists.  This skill was lost for over a century.  In reviving this lost clay art, I felt an innate artistic inspiration as a Caddo.  Each time I hold clay to begin shaping a vessel, I thank my ancestors for this precious gift.

For twenty-five years, Jereldine Redcorn (Caddo/Potawatomi, b. 1939), whose Potawatomi name is Tse Bi Quah (River Woman), has been handcrafting traditional Caddo pottery.  Raised on her family's cotton farm in Colony, Oklahoma, she always felt a close connection to the earth and taught herself how to create ceramics after seeing ancient Caddo pots at the Museum of the Red River (Idabel, Oklahoma) in 1991.

A longtime member of the Caddo Culture Club, Redcorn regularly traveled with the Club to perform traditional dances at various museums and educational institutions.  When she entered the museum in Idabel, she observed hundreds of ancient and beautifully decorated bowls, engraved jars, and unusual clay vessels, and was awestruck by their complexity.  Some of these ceramics dated to 800 A.D.  As there was no active Caddo pottery-making tradition at that time, Redcorn stated:  "That day we were so excited that we decided as a group, as a Tribe, we would learn how to do it and make pottery once again" (Black 2003).

Redcorn returned home, and during the following weeks and months she taught herself how to make traditional Caddo pottery through trial-and-error.  She received help from her family members, including her brother Joe Cross (Caddo/Potawatomi), who knew the basic techniques of hand-building vessels, and archaeologist friends who recommended books and provided photographs of Caddo motifs and decorations (Townsend and Walker 1996:232).  Redcorn's husband, Charles Redcorn (Osage), helped her develop the firing process.  He also fashioned pottery tools to help her sculpt and decorate her exquisite works (Black 2003). Redcorn single-handedly revived Caddo pottery-making for future generations, and has mentored other noted ceramicists, including award-winning  Chase Kahwinhut Earles (Caddo).

In an April 15, 2020, interview with the Indian Arts and Crafts Board, Redcorn noted that she prefers oak to fire her pots because it burns hot and long.  The best natural clays come from deposits in the Caddo ancestral homeland, which is in the general vicinity of the Arkansas, Texas, and Louisiana mutual borders.  One of the best locales for clay is near Marshall, Texas, where fine clays of various colors (gray, red, white) can be found. Red clay is also readily available on the Red River that forms the border of Oklahoma, Texas, and Arkansas.

Creating Caddo pots becomes a journey with my ancestors.  I use the tools, materials and firing methods as close to what, I believe, the old Caddos would have used 500 years ago.  The earthenware created truly comes from e-nah-wah-dut, the Mother Earth.

One ceramic featured in the show was entitled Caddo Head Jar (1998). It was created through hand coiling and modeling red clay.  Then it was burnished, engraved, and wood fired.  The jar is decorated with incised geometric designs based on prehistoric Mississippian culture iconography.  Today, Caddo Head Jar is housed in the permanent collections of the SPIM (A.98.2).

Over the course of her career, Redcorn has received numerous accolades.  In 2009, President Obama and First Lady Michelle Obama selected one of her works for display in the Oval Office.  That same year at the 23rd Annual Red Earth Festival Redcorn was named "Red Earth Honored One" in recognition of her contributions to the Native American artistic community and as a founding Director of the Red Earth Festival.  Her work is included in many prominent museum collections in the United States: National Museum of the American Indian and National Museum of Natural History, Smithsonian Institution, Washington, D.C.; the Oklahoma History Center, Oklahoma City, Oklahoma; and the Bob Bullock Texas State History Museum, Austin, Texas.

To learn more about Redcorn and her artistic work, please visit her website: www.redcornpottery.com.