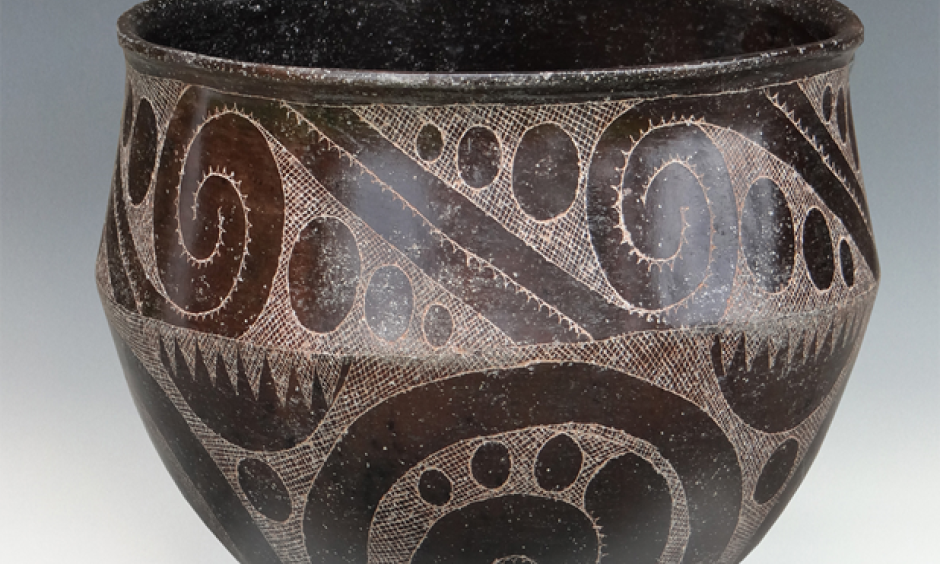 January 11, 2016 - ANADARKO, OKLAHOMA: The Southern Plains Indian Museum, administered by the Indian Arts and Crafts Board of the U.S. Department of the Interior, will feature an exhibit of artwork by Chase Kahwinhut Earles.  The exhibition will run from January 15 to February 20, 2016.  On January 15, an opening reception will be held for the exhibit from 4:00 p.m. to 6:00 p.m.  The artist will be available to discuss his work during the reception.  The reception and exhibition are both free and open to the public.

Chase Kahwinhut Earles, an enrolled member of the Caddo Nation of Oklahoma, is a talented potter.  Born in 1976 to Fran and Wayne Earles of Oklahoma City, Oklahoma, Chase attended Putnam City North High School.  Following graduation, Chase went on to earn a Bachelor of Fine Arts degree from the Savannah College of Art and Design in Savannah, Georgia.   He currently resides in Ada, Oklahoma, with his wife Barbie and daughter Elizabeth, where he works as both an artist and web developer and programmer for the Chickasaw Nation.

Art has been an important part of Chase’s life since childhood.  In 2009, he became inspired by Pueblo style pottery and through this artistic medium he began exploring his own tribal identity and artistic traditions.  Jeri Redcorn taught Chase the traditional Caddo techniques of creating pots and introduced him to many of the customary designs.  Through trial and error, Chase learned where to find his own sources of clay and shell, how to prepare the clay for working, and how to pit fire his pottery in the traditional manner.

The artistic process for Chase begins by collecting both clay and freshwater mussel shells along the Red River.  The shells are then crushed and mixed together with the clay by hand.  Using a coil method, he hand forms each piece.  A rock is then used to burnish the pottery.  This technique creates a highly polished surface that does not require a glaze.  The pottery is then carved with designs drawn from Caddo origin stories.  These motifs include: feathers, serpents, the sun and moon, and the everlasting fire.  Finally, each vessel is wood-fired in an open pit.  Through the use of these traditional techniques, Chase honors his ancestors while also educating the public on Caddo culture and history.

Chase’s work has garnered multiple awards including: 1st place at the 2013 Santa Fe Indian Market, Santa Fe, New Mexico; Best of Show at the 2015 Cahokia Mounds Contemporary Art Show, Collinsville, Illinois; Best of Division at the 2014 Cherokee Art Market, Catoosa, Oklahoma; Best of Show at the 2014 Red Earth Festival in Oklahoma City, Oklahoma.  His pottery is included in the permanent collections of the Museum of the Red River, Idabel, Oklahoma, and the Audie Murphy Museum, Greenville, Texas.

The pottery in the exhibition may be purchased by contacting Chase Kahwinhut Earles directly at Kahwinhut@gmail.com  or www.CaddoPottery.com.