TREASURES OF THE IACB: DEBORAH MAGEE, SONG OF THE WOMAN WARRIOR (2020) 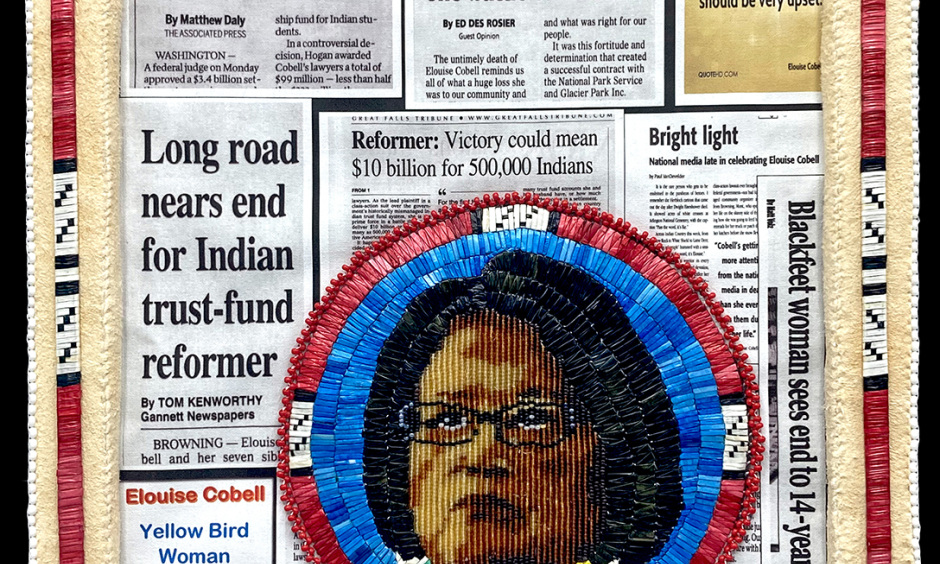 I grew up on a ranch on the Two Medicine River on the Blackfeet Reservation, and the natural beauty of the outdoors has always been a part of me.  Quillwork, being of nature and not manufactured, seems to be a natural extension of who I am.  I remember as a girl being fascinated with quillwork and being impressed when I read a description of it as a “living art.”  Obtaining the rights from my Tribe and working with quills is a “calling,” and quillwork teaches a person many things about living your life in a good way.  It is generally understood among my Tribe that one’s life must be harmonious and peaceful before undertaking a sacred art such as quillwork, and as such, quillwork teaches a person how to live.  I think it’s important that quillwork should not be marginalized and dismissed as “just a craft,” which is part of the colonial mindset, but brought forth and honored as an important expression of our artistic heritage.

Deborah Magee (Na-too-aki, Sacred Woman) was born and raised on the Blackfeet Indian Reservation in Montana.  Growing up in the outdoors with the prairie, mountains, and Two Medicine River at her doorstep, she fostered a deep love for the land her ancestors traveled and came to respect the surrounding plant and animal life.

After studying art as a university student, Ms. Magee questioned the contemporary art world.  “The ugliness of contemporary art left me discouraged and confused about the art world in general,” she noted in a March 2021 interview with the Indian Arts and Crafts Board (IACB).   “When I finally went back to my cultural roots and discovered quillwork, it was like opening the door to a wonderful closet of beautiful and inspiring lovely things that were carefully and lovingly crafted."

Along her artistic journey, Ms. Magee was mentored by a few individuals, including Mark Miller, a non-Indian artist and repair technician, who generously shared his time and skills with teaching her traditional construction techniques.  She also learned the traditional protocols associated with creating quillwork artwork from fellow Blackfeet artist Leonda Fast Buffalo Horse.

Armed with this new knowledge, Ms. Magee decided to “push the envelope” forward through bringing ancient quillwork methods into the twenty-first century in a contemporary way.  “My ancestors used what they had on hand and made art that meshed with their lifestyle,” she said.  “So today, I try to take what is important to my Native culture to create a piece of work that has meaning and beauty, but that is still connected to the Blackfeet culture.”

One such artwork is the delicately quilled Song of the Woman Warrior (2020).  This mixed media portrait of activist Elouise Pepion Cobell (Blackfeet) resides in the permanent collection of the IACB’s Museum of the Plains Indian in Browning, Montana, on the Blackfeet Reservation.

Ms. Cobell (1945-2011) was a close cousin to Ms. Magee, a tireless advocate for Indian Trust Fund reform, and her lawsuit, Cobell v Salazar, resulted in the $1.9 billion Trust Land Consolidation Fund.  In 2016, Ms. Cobell was posthumously awarded the Presidential Medal of Freedom.  Before her passing, Ms. Magee asked her cousin if she could capture her portrait in a work that honored Ms. Cobell’s advocacy work for Indian people.  “She agreed,” Ms. Magee noted.  “Her legacy is astounding.  I don’t think even she knew back then how far reaching it would be for Indian Country.  I felt something had to be done to honor her work as a woman warrior.”

Showing professionally since 1998, Ms. Magee’s work has been collected in the United States and Europe.  She has participated in numerous juried shows such as the Santa Fe Indian Market and the Indigenous Fine Arts Market (Santa Fe, NM), the Heard Museum Guild Indian Fair & Market (Phoenix, AZ), and the Great Falls Native American Art Show (MT), to name a few.  She has also been the recipient of numerous awards and her artwork has been purchased and/or displayed at the National Museum of the American Indian (Washington, D.C.), Pitt Rivers Museum (Oxford, UK), Birmingham Arts Museum (Birmingham, UK), Museum of Art and Design (New York City, NY), and Glenbow Museum (Calgary, Canada).  Ms. Magee has also been an artist-in-residence at the Browning Schools, taught beadwork and quillwork in the Browning community, and served as a quillwork consultant for Oxford University’s Blackfoot Shirts Project.