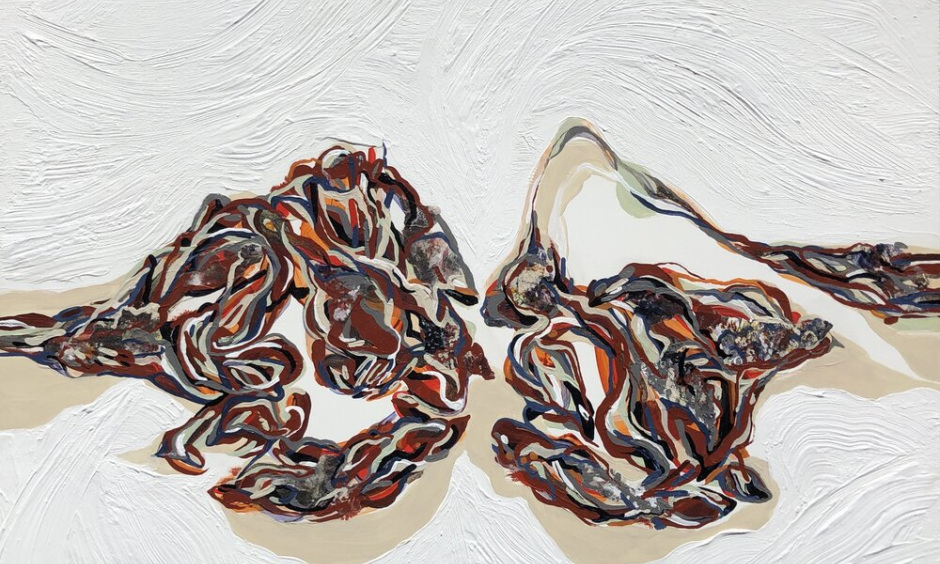 I grew up in the open plains of South Dakota, and now I’m surrounded by the vertical landscape of New York City.  Although my environment has changed, the subject of my paintings remains deeply rooted in the multi-toned layers of the sacred Lakota culture.  I aim to tell fresh stories of the contemporary Native and contribute to the preservation of Lakota culture and language through abstracting their symbolism, stories, and memories.

Renelle White Buffalo (Lakota) grew up on the Rosebud Sioux Reservation near White River, South Dakota.  She was raised by her grandparents, Dean Hix and Philomene White Buffalo, and at an early age her grandmother encouraged her to draw.  “We didn’t have many ‘things’ when I was a kid,” White Buffalo said in an April 2021 interview with the Indian Arts and Crafts Board. “So imagination was essential and art was absolutely necessary.  I also spent a lot of time outdoors, riding horses, fishing, camping, building forts and tree houses, and picking chokecherries and flowers.  All of these things were a release for me,” she explained, “and much later they came to inform my art.”

One of White Buffalo’s early mentors was John LeBouef, her art teacher from elementary through high school in White River.  LeBouef encouraged White Buffalo to attend college and major in fine art, and in 2011 she graduated with a BFA from Iowa State University.

After college, White Buffalo moved to Los Angeles to enter the art world.  Here, she began using acrylic paint to reflect on her Lakota heritage and culture.  Along the way, she met other indigenous artists who encouraged her to experiment with printmaking as well as establish her artistic voice.

“On canvas, I transform traditional Lakota symbolism into contemporary abstract artwork, allowing the composition to create a cross-cultural conversation,” she says.  “The bold and confidently-layered brushstrokes of acrylic paint incorporate personal meaning and connections to my Native American roots.  I try to open-up a dialogue deeper than the subjects I paint, because I want to ultimately create a collaboration between past and present.”

After Los Angeles, White Buffalo moved to New York City in 2014.  Now based in Hoboken, New Jersey, she creates a broad range of works, including paintings on canvas, monotypes, mixed media sculptures, printmaking, and digital art.

One recent painting is (2020) Ed4 (20”x16”, acrylic and mixed media), which is a conversation with her great-grandfather, Ed White Buffalo, a Lakota painter and cowboy.  Although they never met in life, “our commonalities go beyond blood and are evident in paint,” White Buffalo noted.

Reflecting upon his paintings of traditional Western scenes, namely livestock, cowboys, and Native Americans, White Buffalo references these compositions in this engaging and highly textured work.  “I have two of his paintings, and the rest are scattered throughout my family,” she said.  “These two works had been hanging around my studio for some time and although I knew I wanted to work with them, I wasn’t exactly sure how to go about it.  But as I gradually became more involved in printmaking and working digitally, in 2019 I used one of these works as a source of inspiration, which eventually lead me to Ed4.”

“I was so fortunate to have her in my life and to have a show about her.  For this to occur in my home State, where family could come and see, was very important to me,” White Buffalo explained.  “It’s always important for me to show in South Dakota, because the people living there are familiar with the contexts of my work.  Homegrown was also in a museum that I grew up going to, so it was completing a circle.”

White Buffalo is a member of the IACB’s Source Directory of American Indian and Alaska Native Owned and Operated Arts and Crafts Businesses, which is an online resource for authentic Native American art.

To learn more about White Buffalo and her work, please visit www.rwhitebuffalo.com and her Instagram page.