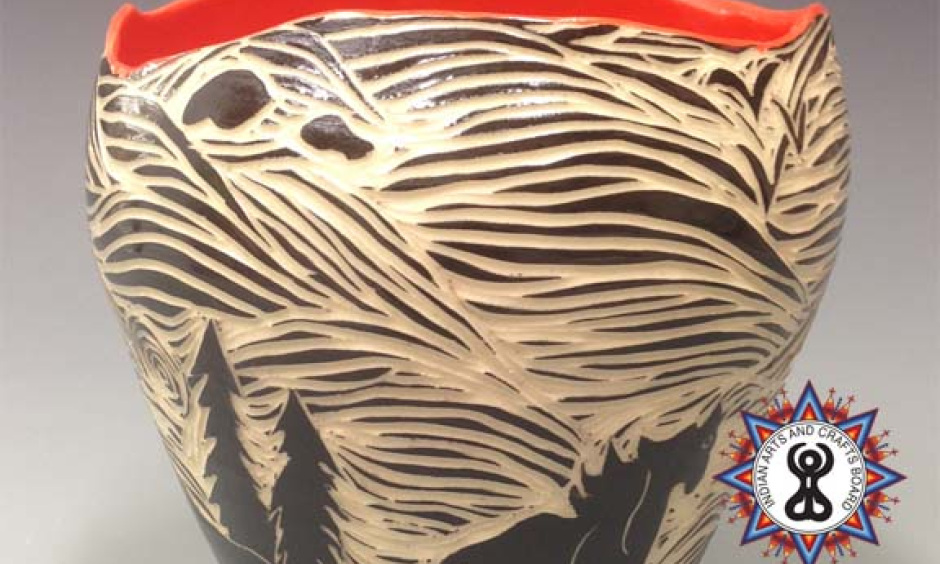 “Through My Mother’s Eyes”

August 28, 2015 - ANADARKO, OKLAHOMA: The Southern Plains Indian Museum, administered by the Indian Arts and Crafts Board of the U.S. Department of the Interior, will feature an exhibit of artwork by Carolyn Bernard Young.  The exhibition will run from August 28 to October 23, 2015.  On August 28, an opening reception will be held for the exhibit from 4:00 p.m. to 6:00 p.m.  The artist will be available to discuss her work during the reception.  The reception and exhibition are both free and open to the public.

Carolyn Bernard Young, an enrolled member of the Choctaw Nation of Oklahoma, is a talented potter. Born in Fort Worth, Texas, Carolyn now resides in Weatherford, Texas, where she owns Earth to Art Studio and Gallery. Carolyn began her artistic training over twenty years ago when she enrolled in a ceramics class to relieve the stress of her job in the aerospace industry.  For many years Carolyn spent a week each summer at Arrowmont School of Arts and Crafts in Gatlinburg, Tennessee, where she learned pottery techniques from highly skilled professionals. At her home in Texas, she spent time taking additional classes and practicing her craft daily.  Following her retirement from the aerospace industry in 2009, Carolyn now works full-time as an artist.  Carolyn also credits Dr. Ian Thompson of the Choctaw Nation of Oklahoma for teaching her traditional methods of building vessels by hand and firing them in an open pit.

The first step in Carolyn’s artistic process is to create a sketch of the envisioned piece.  Carolyn then uses a potter’s wheel to form her contemporary pottery.  After the piece takes its final shape she then paints it with a black underglaze.  Next she uses a sgraffito technique, meaning “to scratch,” to carve totems, spirits, and patterns into the pottery. These designs express her deep respect for Native American culture and the Choctaw Nation.  She then adds brightly colored glazes to create a unique element of surprise and whimsy.  Finally, she fires each piece in an electric kiln.  Using these techniques, Carolyn brings a modern voice to the clay while still honoring the traditions of her ancestors.

The pieces in the exhibit may be purchased by contacting Carolyn Bernard Young directly at 817-269-5375, or through email at carolyn@earthtoart.com.