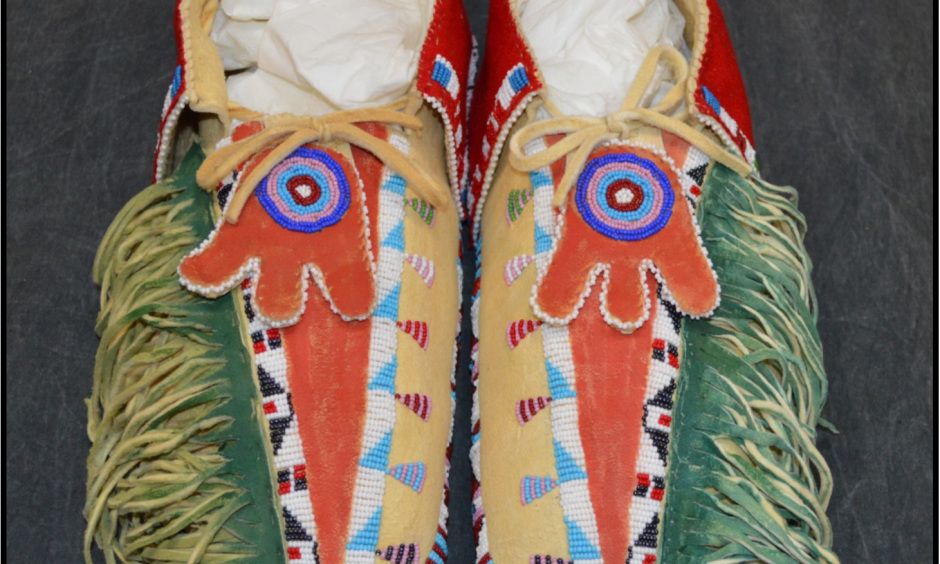 March 16, 2016 - ANADARKO, OKLAHOMA: The Southern Plains Indian Museum, administered by the Indian Arts and Crafts Board, U.S. Department of the Interior, will feature an exhibit of artwork by Eric Smith. The exhibition will run from April 29 to July 8, 2016.  The exhibition is free and open to the public.

Eric Smith, an enrolled member of the Chickasaw Nation of Oklahoma, is an expert craftsman of traditional Southern Plains material culture.  A graduate of McArthur High School, Eric currently resides in Lawton, Oklahoma, with his wife Heather.  In addition to his career as an artist, he also works at Riverside Indian School in Anadarko, Oklahoma.

During his early childhood, Eric began learning various arts and crafts techniques from his Chickasaw family.  As his interest grew, he drew inspiration from historical artifacts and began to develop his own traditional style.  He now specializes in making historically accurate cultural items of the Plains Tribes, reflecting the time period of 1850 – 1875.  These pieces include: bows, arrows, quivers, knife sheaths, pouch bags, pipe bags, quirts, and many other utilitarian items used by the Plains Tribes.

Eric is widely recognized as an expert bow and arrow designer.  His artistic process begins by gathering the various woods used for constructing the bows and arrows.  Then, he sources brain tanned hides for bow covers and quivers and acquires beads that would have been used in the late nineteenth century to decorate them.  All of Eric’s creations are completely handmade, no modern tools or machines are used in the process.  The paints he uses to decorate the pieces are based on natural materials that Eric processes using traditional methods.  Traditional manufacturing techniques are important to Eric, because they honor his ancestors and educate the public on the material culture of the Plains Indian.

Eric’s archery pieces appeared in the Oscar-winning film The Revenant and the HBO mini-series Lewis and Clark.  His craftwork can also be found in over 1,000 private collections in 26 countries.  Eric feels his culture has made him who he is and therefore he strives to share his knowledge with the younger generations whenever possible.

The objects featured in the exhibition may be purchased by contacting Eric Smith directly at plainsindianbows@yahoo.com or at www.plainsindianbows.com.

The Southern Plains Indian Museum is managed by the U.S. Department of the Interior, Indian Arts and Crafts Board.  Regular viewing hours are Monday through Friday, 10 a.m. to 4 p.m.  All exhibits at the museum are free and open to the public. The museum is located at 801 East Central Blvd., Anadarko, Oklahoma. For more information call the museum at (405) 247-6221.