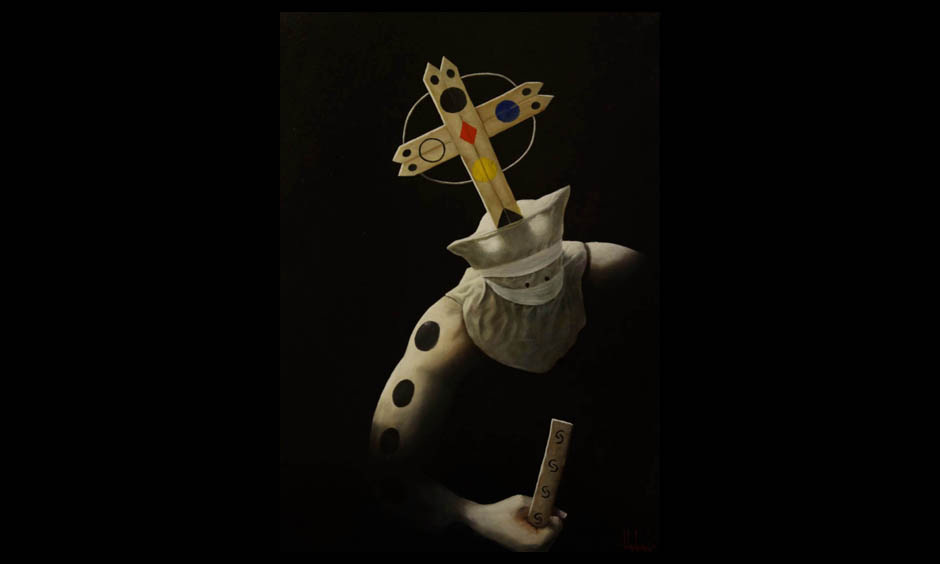 ANADARKO, OKLAHOMA: The Southern Plains Indian Museum, administered by the U.S. Department of the Interior, Indian Arts and Crafts Board, will feature an exhibit of paintings by Benjamin Blackstar. The exhibition will run from July 14 to August 18, 2017.   The exhibition is free and open to the public.

Benjamin Blackstar, an enrolled member of the Kiowa Tribe of Oklahoma, is an exceptional artist.  He is a graduate of Riverside Indian School and is pursuing a Bachelor of Fine Arts degree at the University of Science and Arts, Chickasha, Oklahoma.  Currently he resides in Anadarko, Oklahoma, with his wife and children. Following the completion of his degree, Blackstar plans on pursuing a career as a professional artist.
Although he first began painting in 2010, Blackstar has matured quickly as an artist.  He predominately works in oil paints, but also creates three-dimensional sculptures.  His artistic process begins by stretching his own canvases as well as making his paint.  To produce the colors he prefers, he mixes earth pigments with linseed oil. For the paint medium he uses a mixture of stand oil, Liquin Original®, and mineral spirits.  This careful attention to materials allows Blackstar to produce paintings of exceptional detail.
Blackstar’s artwork reveals a natural gift for contrasting colors and shadows.  He employs the classical techniques of chiaroscuro and tenebrism, from the Baroque and Romantic eras of European art.  The influence of Old Masters such as Rembrandt and Peter Paul Rubens is apparent in his work and many of his paintings feature dramatically illuminated figures bathed in contrasting light and shadow, drawing the viewer into the artwork.  Combining the inspirational artistry of European master artists with Native American ideas and subject matter, Blackstar produces stunning pieces of fine art.
Blackstar’s work has received multiple awards, including Best of Show at the 2016 University of Science and Arts Spring Art Show, Chickasha, Oklahoma, and Best of Show at the 2016 American Indian Exposition Art Competition, Anadarko, Oklahoma.  His works will be featured on the cover of the 2017 American Indian Exposition guide book.
This exhibition marks Blackstar’s first solo show in a museum setting.  The artworks featured in the exhibition may be purchased by contacting Benjamin Blackstar directly at (405) 482-8696 or by email at bblackstarartist@gmail.com.
* Exhibition brochure

The Southern Plains Indian Museum is managed by the U.S. Department of the Interior, Indian Arts and Crafts Board. Regular viewing hours are Monday through Friday, 10:00 a.m. to 4:30 p.m. All exhibits at the museum are free and open to the public.