Museum of the Plains Indian 2021 Showcase 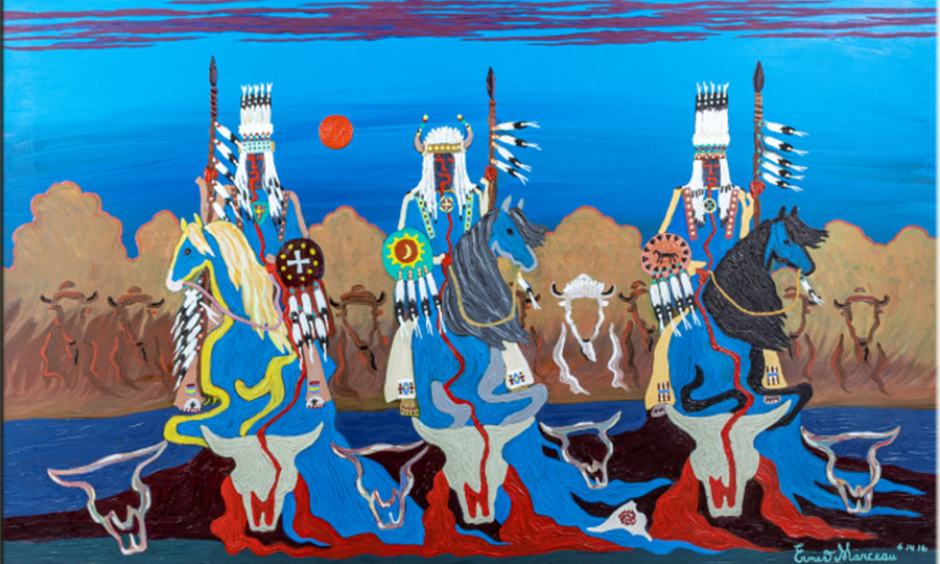 BROWNING, MONTANA: The Museum of the Plains Indian, administered by the U.S. Department of the Interior, Indian Arts and Crafts Board, announces the opening of a special exhibition, 2021 Showcase, featuring Andrea Lekberg, Ernest Marceau, and David Dragonfly.

Andrea Lekberg, an enrolled member of the Oglala Sioux Tribe, is a visual and culinary artist.  She is the owner and pastry chef at a boutique bakery and café, The Artist Baker in Morristown, New Jersey.  She holds a Bachelor of Fine Arts from the Art Institute of Chicago and is a graduate of the Pastry Program at the Cooking and Hospitality Institute of Chicago.  Ms. Lekberg was raised in Illinois but spent her childhood summers near her family home in Martin, South Dakota.

Inspiration for her current work comes from her cultural identity and the relevance of Lakotas in contemporary society.  The patterns, colors, and lines found in traditional Sioux artwork and the local environment of the Pine Ridge Reservation deeply influence her contemporary work. Ms. Lekberg uses hemmed canvases that were left unstretched so that they would lay flat to resemble painted hides.

Ernest Marceau, an enrolled member of the Blackfeet Tribe uses his art to share the culture and history of his people.  Specializing in painting and sculpture, he creates art that allows the viewer to investigate the imaginary world of his mind.  Born in Browning, Montana, Mr. Marceau was raised on the Blackfeet Reservation.  He graduated from Browning High School in 1981, and attended Haskell Junior College in Lawrence, Kansas, where he focused his studies on art.

This exhibit captures the Blackfeet way of life on the Great Plains as though it were a spiritual dream.  Mr. Marceau’s earliest memory of creating art occurred at age three when he produced a stylized drawing of a dog.  He began to experiment with different types of art mediums.  He quickly discovered that painting on stretched canvas was his preferred medium. His visionary world that blends Blackfeet history and culture with a modernist aesthetic is a unique perspective.

David Dragonfly, an enrolled member of the Blackfeet Tribe, expresses his creativity by capturing the vibrant colors and designs in his art, which radiates from his interpretations of life among the Blackfeet people.  He attended the Institute of American Indian Art in Santa Fe, New Mexico and the University of Montana in Missoula, Montana, where he graduated with a Bachelor of Fine Arts in Painting in 1988.  Mr. Dragonfly has Assiniboine family roots but was raised on and resides on the Blackfeet Indian Reservation in Browning, Montana.

Inspired by his diverse Native cultural background, Mr. Dragonfly began painting and drawing at a very young age.  He developed an interest in the pictographic form of art, which is a historic form of Native American expression used by many Plains Indian tribes. His visually appealing art imagery are reminiscent of Plains Indian pictographic art. It is a style with very clean lines and broad, strong colors.