A Tale of Two Totems 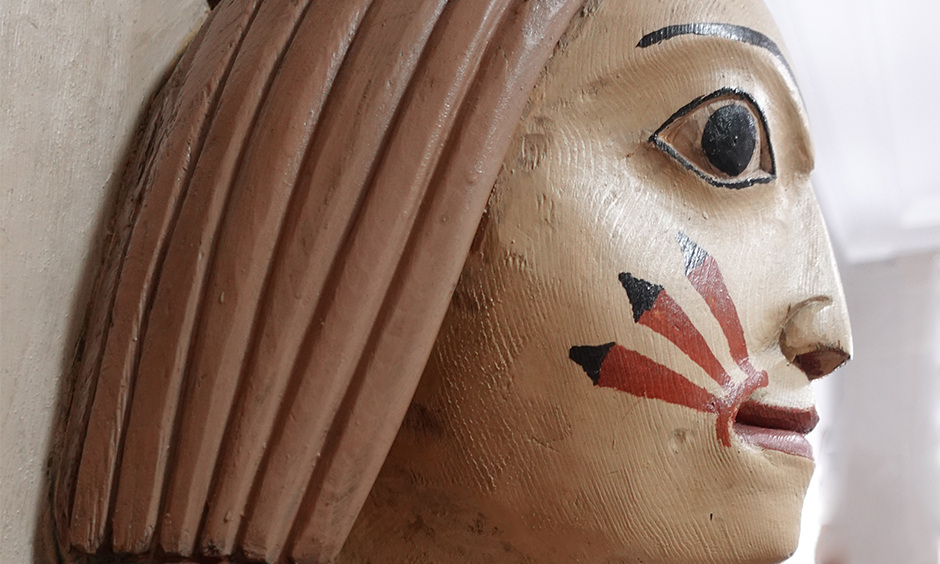 Since 1931, employees and visitors to the Secretary of the Interior's suite have walked past two story poles. While many comment upon the boldly-painted raven, fish, and other carved figures depicted, few realize their cultural importance and historical connections to the Department of the Interior's headquarters building.

The year was 1931, and Ray Lyman Wilbur, MD (1875–1949) was serving in President Herbert Hoover’s Cabinet as the thirty-first Secretary of the Interior. Wanting to showcase Alaska Native artistry and promote interest in what was then the Alaska Territory, Secretary Wilbur sent the following telegram on February 3, 1931, to territorial governor George A. Parks (1883–1984):

Please advise whether you can supply two totem poles about eight or ten feet high for use in [the] Office of the Secretary of [the] Interior by April 15 [, 1931]. Cost would have to be less than one hundred dollars each.

Governor Parks immediately contacted Haida master carver John Wallace for an estimate, suggesting that he might enlist renowned Tlingit carver Jim Rudolph for the work. Wallace instead offered to carve the poles himself, conveying that Rudolph was elderly and therefore would not be able to secure such large trees and put in the long hours necessary to meet the April 15 deadline. Within two days, Governor Parks had responded to Secretary Wilbur confirming that the commission was set for two, eight-foot poles at the cost of $90 apiece. The governor added, “I am sure the totems will be well worth the price. It takes about 15 days to carve a pole after the logs have been obtained. They are carved from Alaska cedar and oftentimes they spend as much as a week selecting the proper trees.”

When completed, the poles were taken to Seattle and—to save time—freighted cross-country versus shipped through the Panama Canal. Arriving in Washington, DC, on April 14, The Chief’s Daughter and The Raven were promptly installed at the entrance to Secretary Wilbur’s office, then situated in the headquarters building across Rawlins Park from where the departmental offices stand today. When the current Interior headquarters building opened to employees in early 1937, the poles were moved to their present location flanking the portal to the Secretarial suite.

John Wallace (c. 1858–1948) was a third-generation Haida carver. He was the only one of his five siblings to express an interest in his artistic heritage. Although Wallace twice left home in pursuit of an education, his father ultimately persuaded him to return and become a master carver.

Wallace had six children with his wife of 22 years. When she passed away, Wallace remarried and had six more children and adopted a seventh. He was active with The Salvation Army and helped to build schools, homes, and churches all the while accepting commissions to produce totem poles, canoes, and other works.

At the age of 80, Wallace’s reputation as a carver earned him an influential role with the Civilian Conservation Corps (CCC). From 1938 to 1942, the CCC and the U.S. Forest Service deployed to locations throughout Alaska to retrieve, conserve, and document totem poles. They gathered them in newly-created totem parks—like the Hydaburg Totem Park—and carved replicas of poles that could not be salvaged or repaired. As the only craftsman involved in the project with prior experience carving totem poles, Wallace led the crews.

At the invitation of the Department of the Interior’s Indian Arts and Crafts Board, Wallace and his son Fred also demonstrated their carving skills at the 1939 Golden Gate International Exposition in San Francisco. The pole they crafted there would go on to grace the entrance of the Museum of Modern Art in New York City as part of a landmark exhibition, Indian Art of the United States. Today, that pole is in the collection of the Indian Arts and Crafts Board’s Southern Plains Indian Museum in Anadarko, Oklahoma.

These two story poles carved for the Department of the Interior in 1931 are not meant to “read” as linear accounts but rather suggest key figures and themes in associated legends. Both poles embrace the concept of protecting natural resources from insensitivity and greed. The Chief’s Daughter is a morality story about the consequences of treating others cruelly. The Raven is a cautionary tale about false pretenses.

In the wake of shipping his story poles to the Department of the Interior, Wallace sent an explanation of the poles’ iconography, and we are fortunate to have detailed descriptions and versions of the two legends in Wallace’s own words:

Or, view both the full legends and the iconography as a single PDF.