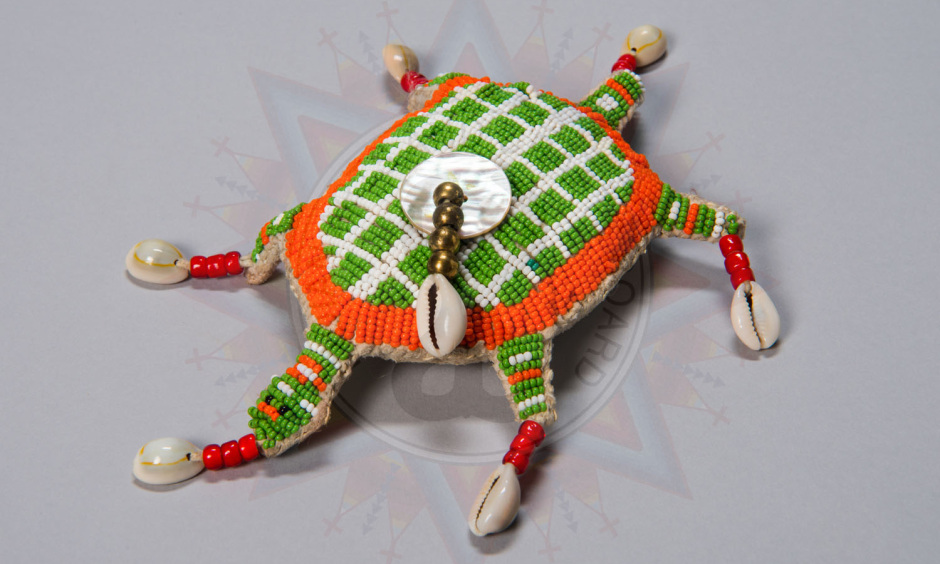 One of the most recognized art forms practiced by American Indians is beadwork.  Before the arrival of Europeans, American Indians utilized stone or wood tools to manufacture beads from natural materials, such as bone, stone, and shell.  The construction process was tedious.  Before the introduction of metal tools, most beads made by American Indians were relatively large and attached individually to garments or necklaces.  With the arrival of trade beads from Europe, smaller glass seed beads were obtained to make many of the beaded designs and objects we know today, including various amulets for children.

This beaded turtle amulet was created by Julie Broken Rope (Oglala Sioux) in 1971, and today it resides in the collection of the Indian Arts and Crafts Board’s Sioux Indian Museum (R.71.5.30).  Constructed of buckskin, cowrie shells, an abalone disc, and glass and brass beads, amulets such as these were provided to Sioux children for their personal well-being.  Parents placed their infant’s umbilical cord inside these special containers and, as a protection from disease and illness, tied the amulet to the infant’s cradleboard.  Once a female child matured, the amulet was fastened to their ceremonial dress.  However, boys did not carry these amulets.  Their sisters wore them on a belt.

According to Yankton Dakota scholar Ella Deloria (Aŋpétu Wašté Wiŋ, Beautiful Day Woman), a beaded turtle charm is called ƥatkáṡa-kṡúpi-wòťawe.  In unpublished notes, she wrote that the turtle was a symbol of longevity (Deloria 1961:106).  She continued: “Wòťawe means charm, in a very broad sense, to cover whatever was held sacred and revered for its ‘inherent power.’  The beadwork over the back was of fancy designs in keeping (though not always a faithful replica) with the design of the reptile’s back.”