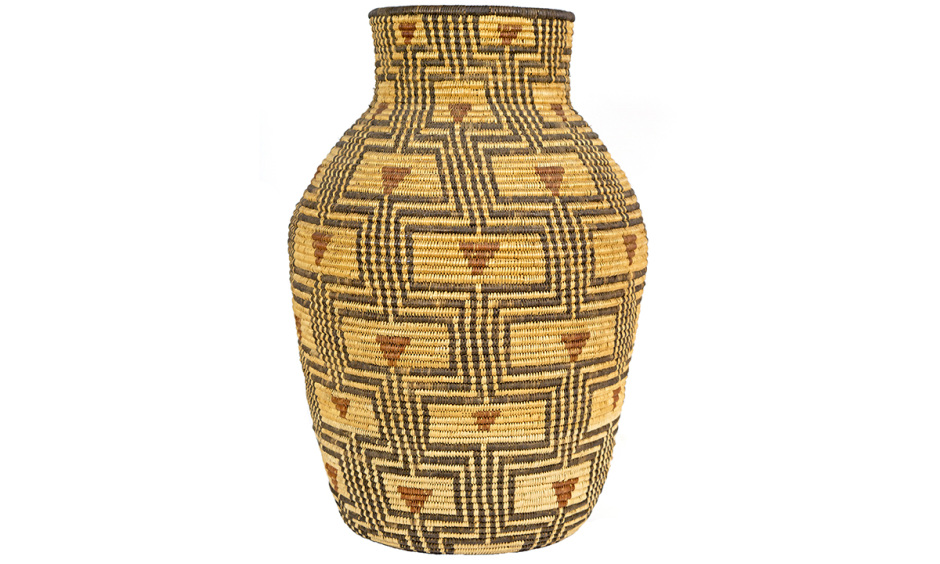 The Western Apache ‒ Cibecue, San Carlos, White Mountain, and Northern and Southern Tonto ‒ produced various types of baskets, but the largest variety was called an olla. Olla baskets were handcrafted in antiquity for water storage and containers for seed and corn.  Liquid bearing baskets, for water and native beer (tiswin), were coated in piñon pitch to seal the interior and exterior surfaces (Roberts 1929).

Highly skilled women created these large vase-like baskets through the coiling technique, whereby three slender willow (Salix lasiandra and nigra) or cottonwood (Populus fremontii) shoots were bundled together to form a foundation or "rod."  In turn, the rod was wound in a continuous spiral around itself and sewn under one of the three rods of the row or coil beneath it to eventually form the body of the basket.  When new, the coils of the basket were white, but with age they appeared more golden in color.  Intricate designs were sometimes interwoven between the rods with black devil's claw and red yucca root (Whiteford 1988).  The exterior surfaces of these baskets were corrugated in form.  Large ollas, more than four feet in height, required two years of labor to create (Robinson 1954).

Around the turn of the twentieth century, large olla baskets with designs were increasingly created for collectors and tourists alike.  Within a decade or so, the production of large baskets declined because smaller baskets appealed to collectors and were the most profitable for artisans (Whiteford 1988).

This Western Apache type basket (A.99.6.345), whose maker is unknown, is housed in the permanent collections of the Indian Arts and Crafts Board’s Southern Plains Indian Museum (SPIM) in Anadarko, Oklahoma.  It is decorated with rectangular and triangular designs of devil's claw and red yucca root, respectively.  Robinson (1954:80, pl. XLII) illustrates a similarly designed San Carlos Apache coiled olla ca. 1903, attributed to basket maker Boni.  While there is no documentation regarding the design motifs on either the SPIM's olla basket or for the San Carlos Apache basket, a Yavapai basket maker stated the rectangular design resembled a “turtle back.”  This design is a traditional Yavapai basketry motif and bears resemblance to the shell of the Sonoran Desert Tortoise (Gopherus agassizii).  Today, this species can be found on the San Carlos Apache Indian Reservation.