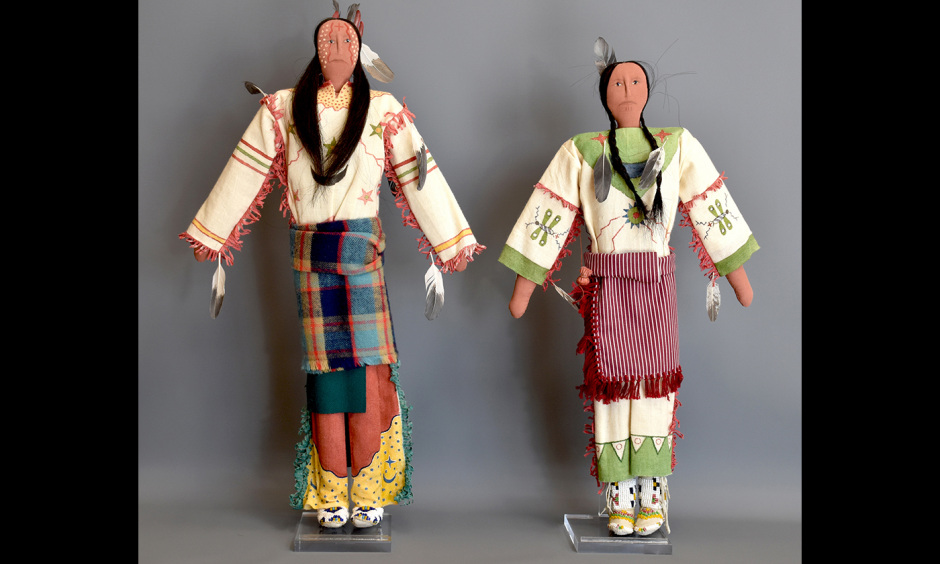 I am both a figure artist and a story keeper.  Stories have always played an integral role in the preservation of our Native culture.  My grandmother was a keeper of stories.  Little did I know, when I was a little girl, just how much of an impact my grandmother's stories would have upon my life.  Creating art is quite a meditative process for me.  I often hear my grandmother's words echoing through my memories as I work.  In a very real way, her stories live in my figures.  It is my purpose to make art that goes beyond being aesthetically pleasing.  It is of paramount importance that my work act as a teaching tool, awakening the viewers' curiosity by providing a connection to the past.  By captivating the viewer with the visual impact of my figures, I intend to communicate a powerful and meaningful story.  It is my sincere hope that, through my work, I may play a part in helping to restore, revitalize, and ensure the continuum of our Lakota, Plains culture.

Since the age of four, Rhonda Holy Bear (Hunkpapa Lakota, b. 1959) has been making dolls.  Her first creation was constructed of scraps of cloth she found around the house of her grandmother, Angeline Holy Bear (Dakota/Lakota) who raised her.  After examining the doll carefully, she told her granddaughter a story that would remain with her forever.

Holy Bear's grandmother had been orphaned as a young child and was raised by her grandmother Mary Pheasant Lolopa (Dakota/Lakota).  Lolopa was skilled in the arts of quilling and beading, and she made a beautiful beaded buckskin doll for Angeline to play with.  She loved the doll as if it were her best friend, and at a tribal gathering in the early 1920s, a young tourist girl visited the family's tipi.  Together they played with Angeline's treasured doll.  When it was time for the visitor to leave, she refused to do so without it.

"She put up such a fuss that the tourist offered her grandmother a small sum of money for it, [and] young Angeline lost her little Lakota doll friend," Holy Bear says.  Angeline greatly missed her doll friend, but she would later teach her granddaughter how to sew and make others.

In a July 17, 2020, interview with the Indian Arts and Crafts Board (IACB), Holy Bear spoke about other influential women in her life.

“What was missing from my childhood was that my grandmother had all of the stories, but didn’t have the treasures,” she said.  “We didn’t have the art; it was all gone.  But my aunt, Agatha Holy Bear Traversie, used to tan hides and she did a lot of beadwork.  I used to watch her and sometimes pick up her work and that was inspirational for me.”

Holy Bear continued: “There was another lady too, Ella Bears Heart.  She was a very traditional and industrious woman.  She was always making star quilts and beading, and I admired her very, very much.  She created a little school called Project Lighthouse and she taught all the kids how to do beadwork.  When I was 9 years old, I would go there and learn to bead from her.  But I really didn’t get to apply it until I moved to Chicago.”

At the age of 14, Holy Bear moved to Illinois to live with a family member and attend high school.  Here she cultivated her artistic talents in beading, drawing, sculpting, and doll-making.  In 1982, she began working in an art gallery, American West, and the following day the owner Alan Edison visited Holy Bear's apartment and took notice of the dolls she had been making.

"His wife, Yoshi Miyake, was a doll collector," Holy Bear says.  "Later that day, she offered to purchase two of my dolls, then they requested I bring in others to sell in the gallery, and a woman came in and bought them all."

Eventually, the gallerists ran an advertisement in American Indian Art Magazine featuring Holy Bear's dolls, which launched her into the art world.

With her career gaining momentum, Holy Bear applied to the Chicago Art Institute but lacked the funds to attend.  Alternatively, she made weekly trips to the Field Museum to sketch and study Native American clothing and beadwork.

“At the Field Museum, I would go there on free nights, sit and sketch with my colored pencils because I didn’t have a camera,” Holy Bear says.  “I longed to get closer to the artwork and touch the beads.  And when I saw all the mannequins, it reminded me so much of my grandparents, although they were not dressed like that.  I felt their tun, a word in Lakota, that translates to the energy that’s left in the pieces, and I felt it.  I wanted to handle the pieces.”

With the assistance of Chicago-based Plains scholar Father Peter J. Powell, she was granted access to the Field's collections and archives.  This allowed Holy Bear to gain additional information that would further inspire her work.

In 1983, Holy Bear's doll making skills were featured in her first exhibition, Eloquent Visions: Dolls of the Great Plains, held at The Museum of the American Indian/Heye Foundation in New York, New York.  Other shows followed, including those at the C.N. Gorman Museum, Davis, California (1984), and the IACB's Sioux Indian Museum (SIM), Rapid City, South Dakota, in 1985.  This special exhibition, entitled Native American Dolls, featured several of Holy Bear's works in addition to dolls created by Berniece Alderman (Santee Sioux).  Two of Holy Bear's dolls from the show, a male and female Ghost Dancer, are housed today in the permanent collections of the SIM (R.84.5.1 and R.84.5.1).  In 1989, both dolls appeared on the cover of American Indian Art Magazine for the special “Doll Issue,” wherein the feature article was written by IACB Director Myles Libhart (1989).  They were exhibited again in 1992 for the special exhibition, Contemporary Plains Indian Dolls, held at the IACB’s Southern Plains Indian Museum in Anadarko, Oklahoma.

These painted muslin dolls feature beaded eyes, beaded moccasins, and fully beaded leggings (female doll). Miniature feathers, fringe accents mimicking buckskin, and other adornments complement the overall composition of each figure.  The carefully painted symbols adorning the clothing of each doll refer to the spiritual beliefs of the people.  For example, circular hail stone motifs and lightning bolts represent sky powers and the dragonfly appearing on the woman's sleeves symbolize change and transformation.

"We were a people in touch with the spirit world," Holy Bear says, "and our clothing reflected how we saw the world.  We adorned ourselves with all [of] our beliefs" (Indyke 2005).

Holy Bear also participated in the Santa Fe Indian Market in 1985.  At this event, she became the first doll artist to receive a Southwestern Association for Indian Arts (SWAIA) Fellowship and she received First and Second Place awards at the Market in the Plains Style doll category.

Holy Bear's dolls and sculptures were recently featured in a 2014-2015 traveling exhibition The Plains Indians: Artisans of the Earth and Sky (the Met; Musée du quai Branly, Paris, France; The Nelson-Atkins Museum of Art, Kansas City, Missouri) and Full Circle/Omani Wakan: Lakota Artist Rhonda Holy Bear, an exhibition at the Field Museum, Chicago, Illinois, held November 2016 through January 2019.  Several of her works are currently on exhibition at the Heard Museum’s Grand Procession: Contemporary Plains Indian Dolls from the Charles and Valerie Diker Collection, which runs until September 7, 2020.

To learn more about Holy Bear and her artistic work, please visit her website: www.rhondaholybear.com.