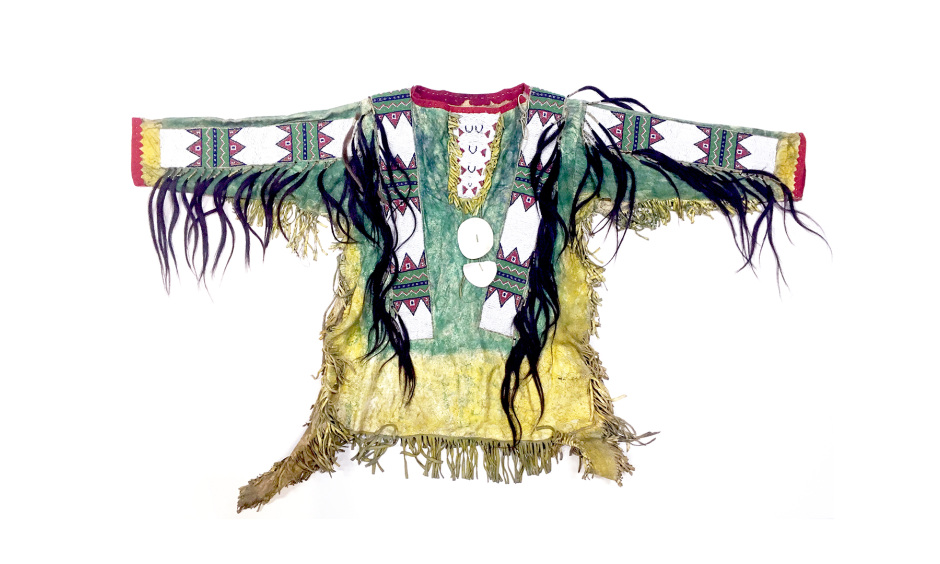 Among the Oglala Lakota, “Shirt Wearers” were small group of distinguished community leaders who looked after the welfare of their people and made decisions about hunting grounds, campsites, and war.  These officials acted as counselors to higher-ranking members of the tribal council.  At their admission ceremony, each Shirt Wearer received a painted shirt fringed with hair.  The coloration symbolized the potency of specific deities that controlled human destiny (Hassrick 1964).  For the Oglala Lakota, green represented the Earth spirit Maka, and yellow the Rock spirit Inyan, the primordial Creator.

Traditionally, older Oglala Lakota leaders made the shirts for each Shirt Wearer, and patterned bands of quillwork and beadwork represented the life accomplishments of the new shirt bearer.  Perhaps the most distinguishing feature of these shirts was the hair lock fringe on the sleeves.  The famous Oglala warrior Crazy Horse (Tȟašúŋke Witkó) earned membership in the Shirt Wearers’ Society in 1865.  However, he was forced to return his shirt after endangering tribal unity by eloping with a wife of a fellow tribal member (Hail 1980:68).  The Oglala stated these objects were “owned by the tribe” (Wissler 1912-1916:7), and as powerful symbols of authority they became known as “Leader Shirts.”

There were four Shirt Wearers among the Oglala (Wissler 1912:7).  After tribal warfare had ceased on the Great Plains, individuals under a Shirt Wearer’s care contributed a lock of their own hair to adorn his shirt.  The Oglala believe that hair carries the spirit or essence of the person, and its application represents trust in the leader. Oglala Lakota elder Leola One Feather explained: “What they’re saying [by providing their hair] is, ‘We’re giving you our power to be successful, so don’t fail us’” (Chalker MS: n.p.).

This Leader Shirt (R.113) is housed in the permanent collections of the Indian Arts and Crafts Board’s Sioux Indian Museum in Rapid City, South Dakota.  Photographer John A. Anderson collected it in 1905.  From 1891 through 1936, Anderson lived on the Rosebud Reservation in South Dakota, acquiring numerous objects there and abroad from Oglala Lakota individuals. According to Anderson, this Leader Shirt belonged to the Oglala Lakota chief Little Wound (Tȟaópi Čík’ala), a resident of the Pine Ridge Reservation.  Made of painted green and yellow buckskin with attached human hair fringe, glass beads and shell ornaments, it has tailored sleeves.  The shell accessories were not mere decoration.  Leola One Feather noted that men could only wear shells if his daughter(s) or sister(s) performed certain ceremonies.  She also observed that sea shells are like a shield. “It’s a reflector [in case] anybody throws bad medicine at you.  Bad medicine bounces off, like…a mirror” (Chalker MS: n.p.).

Chalker, Kari and Paulette Montileaux (eds.). In the Way of White Buffalo Calf Woman: Artistry and History in the Collections of the Sioux Indian Museum. Unpublished manuscript on file at the Indian Arts and Crafts Board. Washington, D.C.

Hassrick, Royal B. 1964. The Sioux: Life and Customs of a Warrior Society. Norman: University of Oklahoma Press.