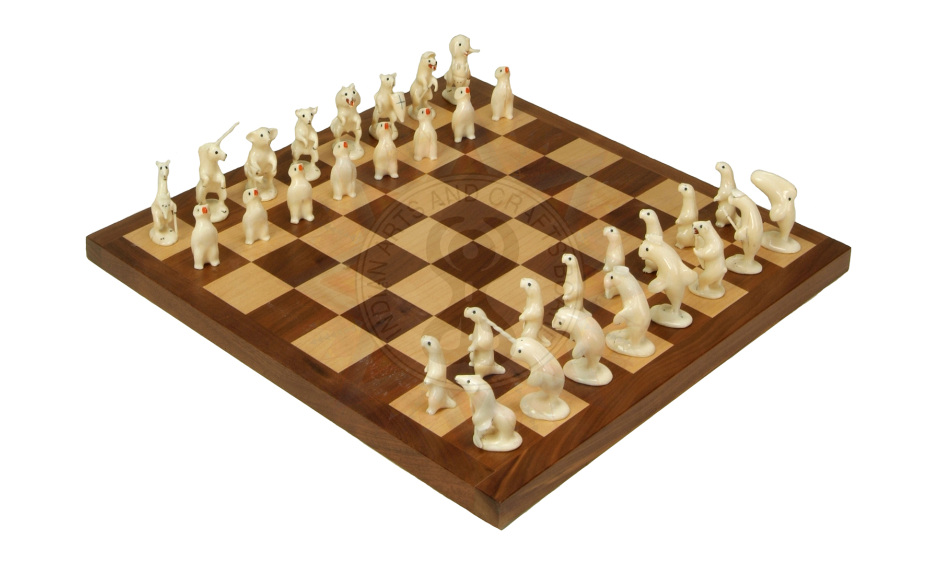 For thousands of years, carvers across the Bering Strait region utilized Pacific walrus ivory to produce a large variety of tools to help them survive the difficult and often hostile environment.  The very earliest of these implements were purely functional and typically undecorated.  Around 200 B.C., however, ornate pieces of carved ivory – like harpoon socket-pieces, ulus (woman’s cutting tool), and snow goggles – bearing graceful curving lines and circles surrounding mounded knobs were first produced by people of the Old Bering Sea culture.  Two thousand years later, these small, highly portable and deeply patinated ivory artifacts, which originated from ancient village sites, began appearing in the mid 1800s, passing from Alaska Native collectors to American whalers, teachers, traders, and eventually curators who considered them as works of “art” fit for museum displays.

Paradoxically, the Bering Strait Alaska Natives had no word for “art” in their languages.  Carved items were created to serve a practical function.  If items were embellished it was to help “please” or satisfy the spirits of game animals and other unseen forces that were believed to control local environments, because they were attracted by beautiful things.  In essence, ornamented objects helped guarantee human survival in a sometimes unforgiving Arctic world.

Local artistic ivory carving was transformed with the 1848 arrival of American whalers in the Bering Sea.  Seafaring men desired mementos of their travels to take home, and they purchased artifacts and commissioned new objects from local carvers, including parasol handles, pipes, canes, salt and pepper shakers, and other objects (Smith 1980:13).  Whalers also introduced scrimshaw carving and engraving techniques.  This resulted in the development of cribbage boards, and a new pictorial style emerged where modeled human and animal figures appeared more lifelike.  During this period of artistic transformation, local Alaska Native carvers also began signing their works for the first time (Lipton 1977:30).

Bering Strait carvers have continued to carry on these ancient traditions and produce incredibly diverse and creative works in ivory, such as this ivory chess board.  Entitled Land vs. Sea, it was carved by Lane Iyakitan (1929-2000, St. Lawrence Island Yupik) in 1982.  One side of the chess board features a horse (rook), unicorn (knight), mouse (bishop), cow (queen), lion (king), dog (bishop), wolf (knight), elephant (rook), and a row of puffins (pawns).  The other side portrays a sea lion (rook), narwhal (knight), beluga whale (bishop), walrus (queen), killer whale (king), polar bear (bishop), bearded seal (knight), humpback whale (rook), and a row of sea otters (pawns).  Iyakitan’s Yupik name was Agragiiq, and he was an accomplished hunter whose knowledge of St. Lawrence Island bird and animal life was employed by teams of biologists over his lifetime.  The chess set, along with ivory carvings by other artisans, was featured in an exhibition held at the Indian Arts and Crafts Board’s (IACB) Southern Plains Indian Museum (SPIM), Anadarko, Oklahoma, in 1982 entitled Alaskan Eskimo Carvers of Gambell.  It was subsequently purchased and is now housed in the permanent collections of the SPIM (A.82.19 A1-B9).

The Pacific walrus is protected by the Marine Mammal Protection Act of 1972 (16 U.S.C. 1361 et seq.) and may only be harvested by coastal dwelling Alaska Natives.  Renowned St. Lawrence Island Yupik carver Susie Silook has noted the significance of the walrus for Bering Strait communities:

In accordance with our cultural value of no waste, we’ve made our boats, tools, clothing, spiritual items, and artwork from the inedible parts of the gift of the walrus. They are inextricably a part of our ancient and sustainable relationship with the land and sea, and provide critical food and an important economic resource for hunters and artists in rural Alaska.

Lipton, Barbara. 1977. Survival: Life and Art of the Alaskan Eskimo. Newark and New York: The Newark Museum and The American Federation of Arts.