TREASURES OF THE IACB: JAMES STAR COMES OUT, HORSE MASK (2019) 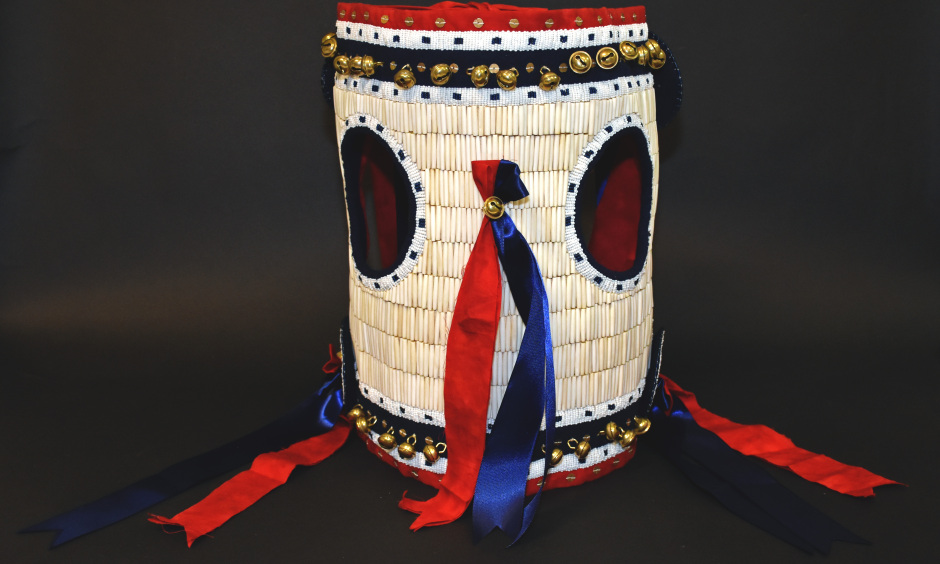 At one time in the history of the Oceti Sakowin, the use of horse regalia was prominent. It was utilized in various ceremonies, identified individuals as members of a warrior society, or regalia was featured in giveaways to honor or to remember someone.  But over time it became obsolete.

As an artist, I create historical horse regalia because I feel obligated to share and pass on my knowledge in order to revitalize an old custom that strengthens our cultural connection to the horse.  I also want to promote our culture so that the public has a better understanding of who our people are.

For nearly thirty years, James Star Comes Out (Oglala Lakota) has been creating a variety of artwork related to the horse.  Since his youth, he was fascinated and intrigued by the horse, which is highly honored and cherished among all tribes within the Oceti Sakowin, or the Great Sioux Nation.

Star Comes Out embarked on his artistic career by first carving horse dance sticks. Historically, Sioux hunters and warriors greatly depended on their horses, and these ties often resulted in deeply seated emotional and spiritual bonds.  When a favorite horse died, especially one that saved the life of its owner in battle, it was often immortalized in a three-dimensional carved portrait of the well-loved animal.  These sculptures were carried by men in ceremonial dances.

Guided by his grandmother Paulina Kindle (Oglala Lakota/Sicangu Lakota, 1912-2002), who was an accomplished quilt maker, beader, and quill worker, Star Comes Out eventually moved on to other media, such as beadwork, quillwork, and traditional dance regalia.  But following the loss of his nephew in 2005, he began focusing his artwork on horse regalia.  For the ensuing memorial ceremony, Star Comes Out created a full set of traditional regalia (mask, headstall, saddle, collar) for the horse that was given away to honor the memory of his beloved family member.

As Star Comes Out continued to perfect his work, museums and other cultural institutions began to hire him to teach programs related to the horse’s place in the history, spirituality, and culture of the Oceti Sakowin.  These institutions also commissioned his work for exhibitions and their permanent collections.  One such artwork is an intricately beaded Horse Mask (R.2020.01.01) that resides in the collection of the Indian Arts and Crafts Board’s Sioux Indian Museum (SIM), Rapid City, South Dakota.  The contemporary mask was inspired by early historic pieces dating to ca. 1900 in the SIM collection.

Star Comes Out was recently featured in the (2020) Pioneer PBS documentary The Horse Relative.  This production (watch trailer here) focuses on the history of horse regalia and the contemporary revival of this centuries-old tradition.

To learn more about Star Comes Out and his artistic work, please visit his Facebook page www.facebook.com/sungwokhoyaka.