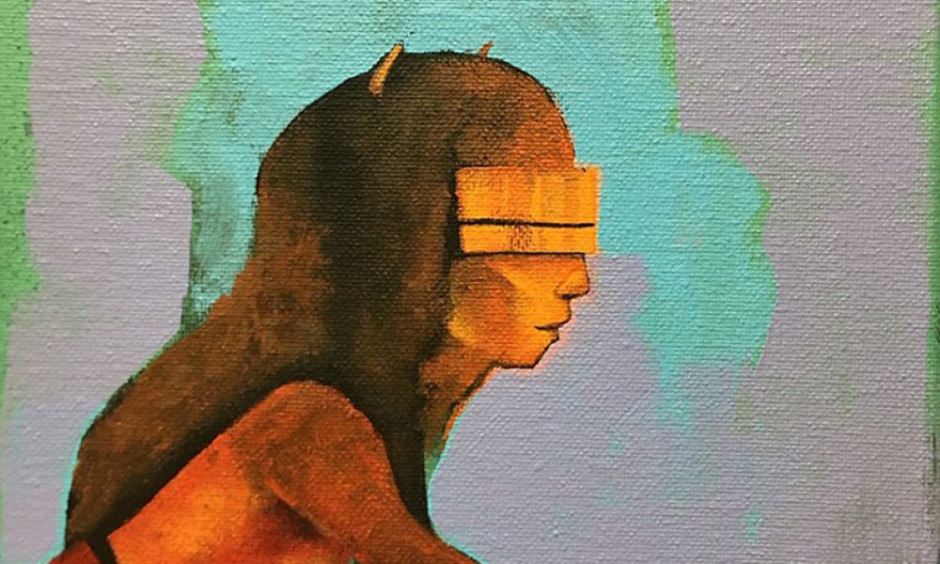 ANADARKO, OKLAHOMA: Road Warrior, a special exhibition of contemporary paintings by Micah Wesley, presented by the Southern Plains Indian Museum, administered by the U.S. Department of the Interior, Indian Arts and Crafts Board, is available from the following website:

As a child he was deeply influenced by his parents. His father was a painter, and encouraged Mr. Wesley to accompany him to collect supplies, visit galleries, and meet fellow artists. His mother’s singing continues to guide his hand while painting, allowing him to transfer his personal thoughts and emotions onto the canvas. Childhood drawings of animals and dinosaurs eventually blossomed into more mature subjects. As a teenager, exposure to graffiti art also influenced Mr. Wesley’s style and technique. Today he works in various media, including oils, acrylics, and enamel paints, on gessoed canvas. Mr. Wesley creates most of his artwork spontaneously, placing brush to canvas whenever struck by inspiration.

Much of his current work draws parallels between films and the history of Native Americans. Rejecting the traditional narratives of art history, which he views as overly homogenous, he seeks to emphasize individualism and identity in his art. Mr. Wesley’s recent painting focuses on science fiction films, such as Mad Max 2: The Road Warrior. He draws inspiration from the life struggles of characters and communities and uses these themes to create connections between contemporary Indian communities and those inhabiting a dystopian future. Many of the paintings in this exhibit relate to the "Road Warrior" of the Mad Max film series, a haunted individual who is neither good nor bad, but who symbolizes the human drive for survival against all odds.

The artwork featured in the exhibition may be purchased by contacting Micah Wesley directly, at thewerewulfmicah@gmail.com or by visiting his website at www.wulfbrand.com.

The Southern Plains Indian Museum is managed by the U.S. Department of the Interior, Indian Arts and Crafts Board.