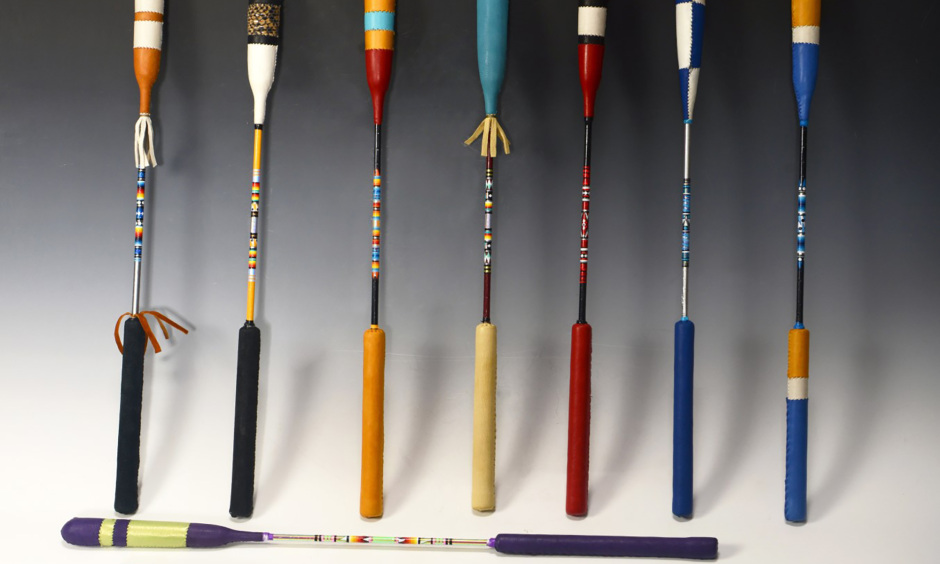 HEARTBEAT OF THE POW-WOW NATION

ANADARKO, OKLAHOMA:  Heartbeat of the Pow-wow Nation, a special online exhibition of drumsticks by Anthony Yahola, presented by the Southern Plains Indian Museum, administered by the U.S. Department of the Interior, Indian Arts and Crafts Board, is available at the following site:

During childhood Mr. Yahola was exposed to pow-wow singing and took an immediate interest.  At age 12 he began singing in the Southern Style, a regional style of pow-wow singing in which songs are sung in a lower vocal range with a faster-paced tempo to create the melody.  In his teenage years, he learned the Northern Style of singing which is characterized by the high-pitched falsetto and a slower rhythmic beat.  Being around seasoned singers who used decorative drumsticks inspired him to produce his own

Once he acquired the general knowledge on how drumsticks were put together, Mr. Yahola began constructing his own style of percussion sticks.  However, he soon realized he would need to advance his drumstick-making skills to a higher level to create the implements he admired.  As his skills matured, the drumsticks he made became more ornate in decoration and durable in use.  Today Mr. Yahola’s talents are known throughout Oklahoma and across pow-wow country, providing him a large customer base.

The physical act of working with his hands brings him a feeling of being closer to his cultural heritage.  From cutting the fiberglass rods to sewing the last stitch, each step in the process gives him a great sense of accomplishment.  The work he produces is a representation of his people, and each drumstick is handcrafted with great care.  Mr. Yahola draws inspiration from tribal colors and motifs in the decorative aspect of drumstick making.

This exhibit will be the first for Mr. Yahola and he is excited to be recognized in a professional setting.

The artwork featured in the exhibition may be purchased by contacting Anthony Yahola directly at yahola335@gmail.com or 405-628-3583.

The Southern Plains Indian Museum is managed by the U.S. Department of the Interior, Indian Arts and Crafts Board.