TREASURES OF THE IACB: GERTRUDE SVARNY, THE GATHERER (1990) 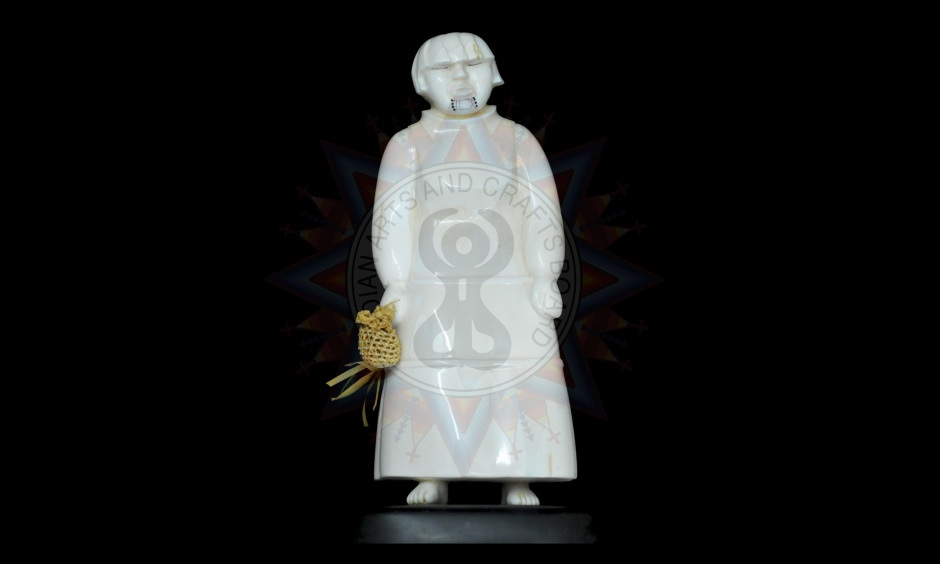 Gertrude Svarny (Unangan, b. 1930) was born in the remote Alaskan village of Unalaska in the Aleutian Islands. In 1942, the village was bombed by Japanese forces during WWII and every resident was evacuated to southeast Alaska. Three years later, the people of Unalaska finally returned home, but their homes, schools, and other facilities were in disrepair due to the effects of war. In 1946, Svarny returned to southeast Alaska to complete high school, eventually returning home to Unalaska in 1948 where she married her husband Sam. Relocating to Seattle, Svarny participated in an oil painting workshop at the University of Washington, which provided her with an outlet to explore her artistic talents.[1]

At the age of 48, Svarny’s daughters inspired her to experiment with traditional Unangan basket weaving, an art form that her mother Hope had excelled in. Unangan baskets were customarily constructed of wild rye grass, and a twining technique was used to create them. Typically, baskets were woven upside down and sometimes over wooden or glass forms. Incredibly, some Unangan baskets contain 1,300 stitches per inch, and one elder stated it took her fifteen hours to weave one inch.[2] Baskets were decorated in a technique called “false embroidery,” wherein the chosen design is sewn into the basket construction.

After many years in the Lower 48, Svarny’s family returned to Unalaska permanently in 1980. Here, Gertrude began teaching herself how to carve various natural materials: wood, bone, ivory, soapstone, and alabaster. The resulting sculptural works – accentuated with local mineral pigments, animal sinew, seal intestine, and sea lion whiskers – are reflective of her Unangan heritage, and often depict traditional scenes of people working, dancing, and hunting. Although Svarny is well-known for her sculptures, she is also a respected bentwood artist creating traditional Unangan hunting visors and boxes through ancient steam heating techniques.

Svarny began exhibiting her work in 1983. Since that time, her award-winning art has been featured in many prominent venues, including the Smithsonian’s Festival of American Folklife (Washington, D.C.), the Trail of Tears Art Show (Oklahoma), and the Indian Arts and Crafts Board’s Southern Plains Indian Museum Exhibition Sculpture by Gertrude Svarny, which featured the The Gatherer (A.90.4) pictured here. This sculpture depicts a tattooed Unangan woman gathering local products with a rye grass basket. The tattoos are inset with baleen and the basket is fastened with a twisted sinew rope. The Gatherer is one of several Alaska Native ivory sculptures highlighted in Alaska Native Ivory, a 2017 consumer education brochure published by the Indian Arts and Crafts Board.

Svarny received the Alaska Governor’s Award for Native Arts in 2008. In 2017, she was a recipient of the Rasmuson Foundation Distinguished Artist Award for a lifetime of creative excellence and contribution to the arts and culture of Alaska.[3] Over the course of her lengthy career, Svarny served as the Treasurer of the Board of Trustees of the Institute of Alaska Native Arts and as a member of the Board of Regents of the Institute of American Indian Arts in Santa Fe, New Mexico.

A retrospective exhibition of her art work, entitled Gertrude Svarny: Ukuganaadan, will be held at the Anchorage Museum in 2018-2019.