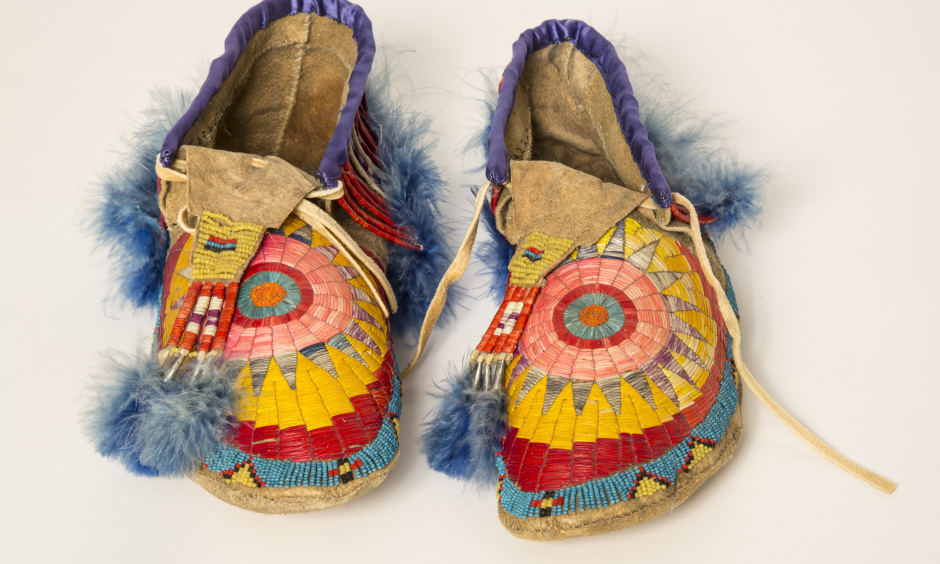 The Indian Arts and Crafts Board’s (IACB) museum collections contain a remarkable diversity of historic and contemporary Native American arts. In an effort to educate the public about these significant holdings and to promote our mission, the IACB periodically features one special artwork.

These colorfully quilled and beaded men’s Sioux moccasins were produced by an unknown female artist, possibly Lakota, ca. 1900-1920. They were originally manufactured of buckskin, and feature glass seed beads, silk, and an intricately quilled multi-colored solar design. The feather “fluffs” were added on the cuffs and tongue in 1969. The moccasins were gifted to the Sioux Indian Museum by Mr. J. P. Roberts in 1967 (R.69.2.22 a-b).

The beads sewn along the bottom edge of the moccasins were not only decorative, but also served to protect the quillwork from breakage, fraying, or getting caught in the grass. According to Dakota scholar Ella Deloria (1961:55-56), within Sioux traditions the art of quillwork originated with the spirit Two-Woman, who selected only certain women to learn this art form. “They were marked women. Thus, quillwork was not learned from a human teacher, by practice, trial and error till perfection was achieved. [Instead] it came suddenly, and the worker’s first piece was as perfect as her last – because she had supernatural help…Those who were outstanding quill workers belonged to a cult or guild, and their aim was to scorn copy[ing]. Originality of design came natural to them.”

In Lakota philosophy, all life power comes from the sun, and like a vein it represents the flow of lifeblood from the sun to earth (Chalker n.d.). The sun was a manifestation of Wakan Tanka (The Creator) and objects like these expressed connections between the physical and sacred world. For the artisan, the act of creation was an act of communion with higher powers.

Chalker, Kari. N.D. In the Way of White Buffalo Calf Woman: Artistry and History in the Collections of the Sioux Indian Museum. Unpublished manuscript on file at the Indian Arts and Crafts Board. Washington, D.C.