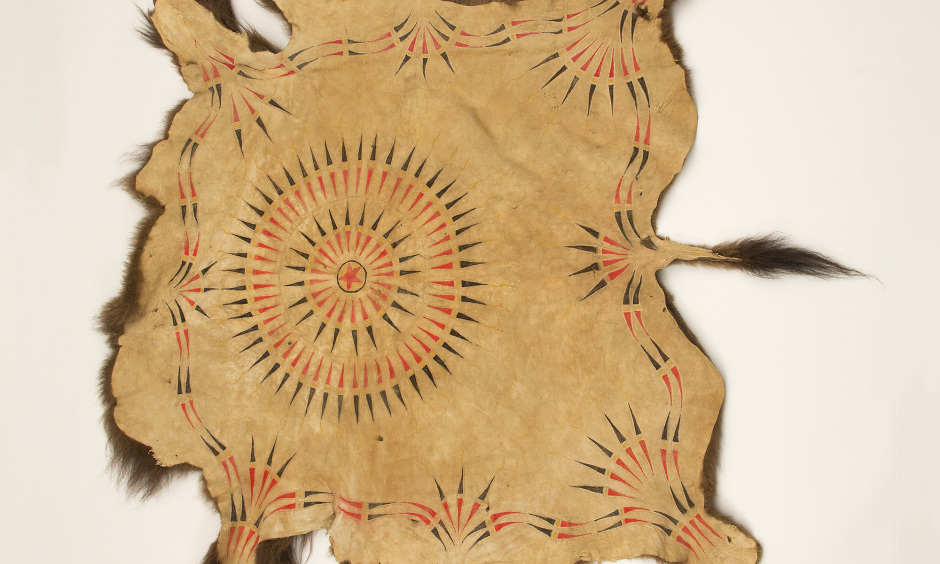 Lakota artists have practiced the art of hide painting for centuries, and have developed the art form to a high degree of sophistication.  Both men and women create painted hides in Lakota culture, although the two genders historically created different types of painted hides.  Men traditionally created pictographic robes depicting exploits in battle and hunting while women painted a variety of geometric designs.  With the disappearance of the bison herds in the late 19th century and the relocation of Lakotas to reservation, the tradition of hide painting nearly disappeared.  Lakota artists adapted to this cultural shift by adopting the use of new materials, such as ledger paper in order to continue the traditions of both geometric and pictographic painting.  In the 20th century, with the return of the bison, hide painting underwent a renaissance.  It is now practiced by a number of contemporary artists throughout South Dakota and is one of the most recognizable art forms of the Lakotas.

The painted bison robe shown here was created by the Yanktonai Sioux artist Herman Red Elk, and is housed today at the Sioux Indian Museum, Rapid City, South Dakota (R.67.4.3).  Red Elk was born in 1918 in Poplar, Montana, on the Ft. Peck Reservation.  In 1960, Red Elk moved to Rapid City to recuperate from tuberculosis at the Sioux Sanatorium.  As a patient he gained his first experience in the arts under the vocational training program at the sanatorium. He undertook further art training through a 1963 summer art workshop at Black Hills State College.  Additionally, he studied under noted Yanktonai Sioux artist Oscar Howe at the University of South Dakota during the summers of 1964 and 1965.  From 1963 to 1964, under a project sponsored by the Indian Arts and Crafts Board’s Sioux Indian Museum, Red Elk pursued research and practiced the methods and designs of traditional Lakota hide painting.  In 1969, he accepted a position as the Museum Aide at the Sioux Indian Museum, where he would remain until shortly before his death in 1986.  He said:

“I enjoy painting; trying to recapture and preserve the very early traditions and life of our Sioux of the plains, their religion, their ceremonies, and their many ways of expressing themselves in their various art media.”

The Black War Bonnet design that adorns this robe is cited by noted anthropologist John Ewers as being a pattern unique to Lakotas and closely associated tribes.  A typical Black War Bonnet design consists of nested concentric circles of pairs of isosceles triangles with their bases slightly apart and their tips pointing in opposite directions, all aligned with a central point. The rays seem to have perfect alignment but some are set slightly off, a design characteristic that creates a shimmering effect when viewed in full.

The colors and patterns found in the Black War Bonnet design are highly symbolic.  It is a stylized representation of an eagle feather headdress, as seen from above.  The color black carries meanings associated with danger and death in Lakota culture.  White symbolizes the spirit world of ancestors and the color red represents both blood and life.  Taken together, these colors and patterns confer protection to the wearer of the robe, and symbolize his prowess and strength as a warrior.