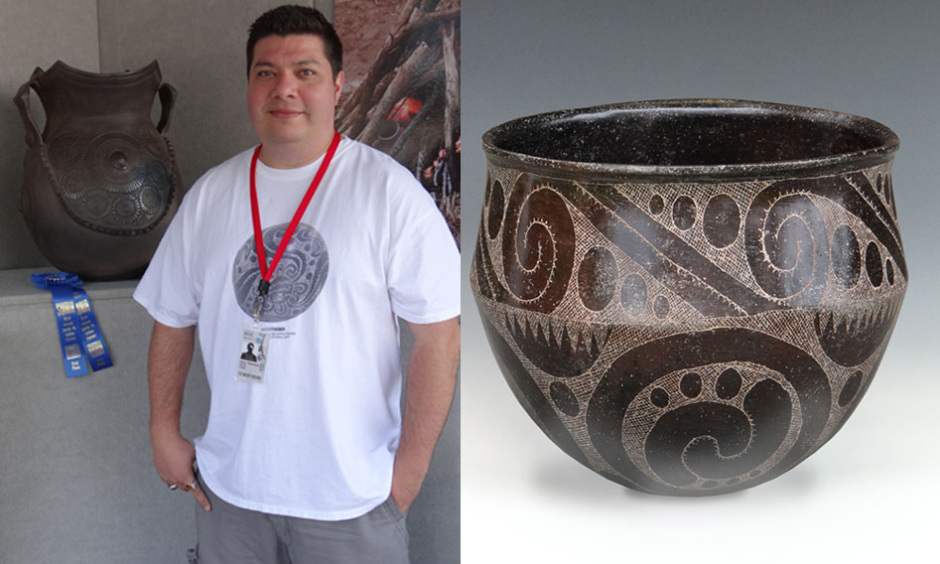 Walking the river banks of the White, Washita, and Red rivers of Oklahoma, Caddo potter Chase Kahwinhut Earles is always on the hunt for local clay, harvesting and processing it to create exquisitely crafted earthenware ceramics inspired by ancient forms.  Five-hundred years ago, his Caddo ancestors produced some of the most striking pottery in prehistoric North America.  All of these wares were created by the coiling technique and many were engraved with organic designs derived from Caddo cosmology and myth. 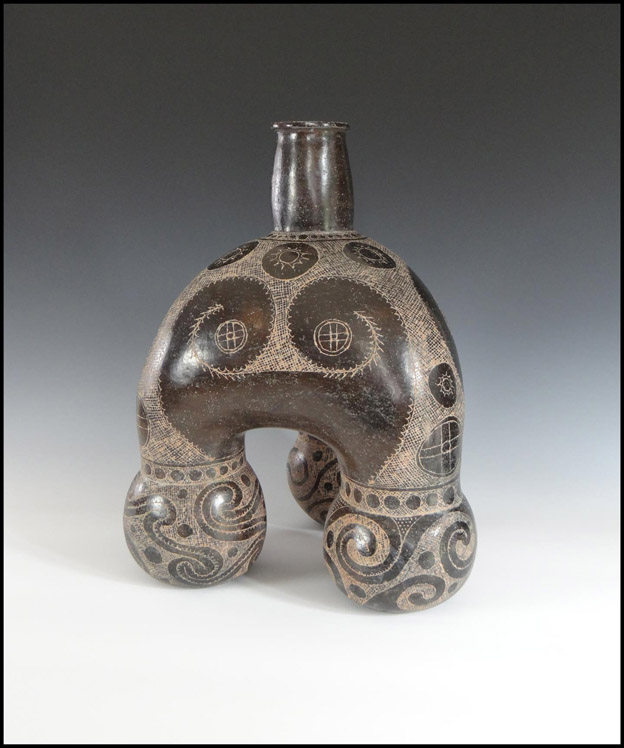 “My contemporary Caddo pottery [is] born of inspiration from my Native tribe’s ancient and unique heritage.  It is their legacy that I wish to keep alive by interpreting our ancient designs and symbols in a new and modern way using the methods and materials of our time,” says Earles, whose ceramic works will be on display in a new exhibition opening January 15 at the Southern Plains Indian Museum in Anadarko, Oklahoma.[1]

Born in Oklahoma, art has always been a part of Earles’ life.  In kindergarten, his art teacher asked him to draw something for the school, sparking a lifelong interest in visual art.

From that day forward, Earles was always drawing or painting.  After high school he attended the Savannah College of Art and Design in Georgia, graduating with a bachelor’s degree in computer art and animation.[2] 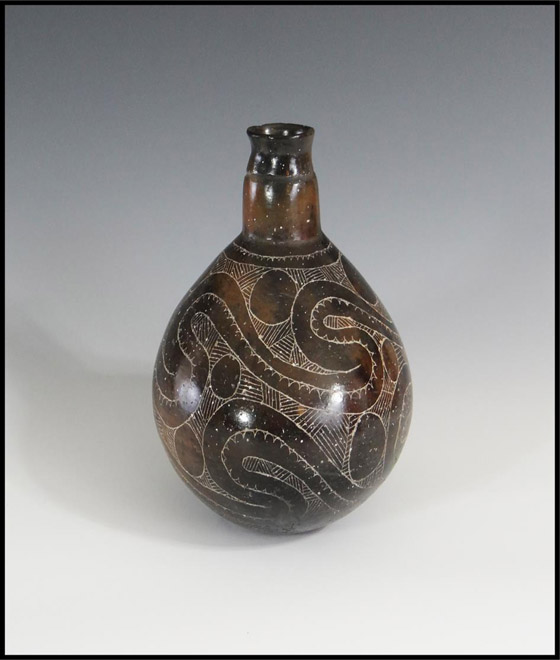 Instead of pursuing a career in his major, Earles became a web designer and today he works for the Chickasaw Nation as a website developer.

Earles had always been enamored by Southwestern Pueblo pottery, but making replicas seemed “like robbing the awesome history and culture [the Pueblo people] possessed.”[3]

Then he found master Caddo potter Jereldine Redcorn and the path of his artistic expression blossomed.

Redcorn was a pioneer.  Single-handedly she began reviving the lost tradition of Caddo pottery in the early 1990s after being exposed to ancient pieces in museum collections.  “Creating Caddo pots [became] a journey with my ancestors,” Redcorn said.  She vowed she would make these ancient vessels again and “use the tools, materials and firing methods the old Caddos would have used 500 years ago.  The earthenware [they] created truly comes from e-nah-wah-dut, the Mother Earth.”[4] 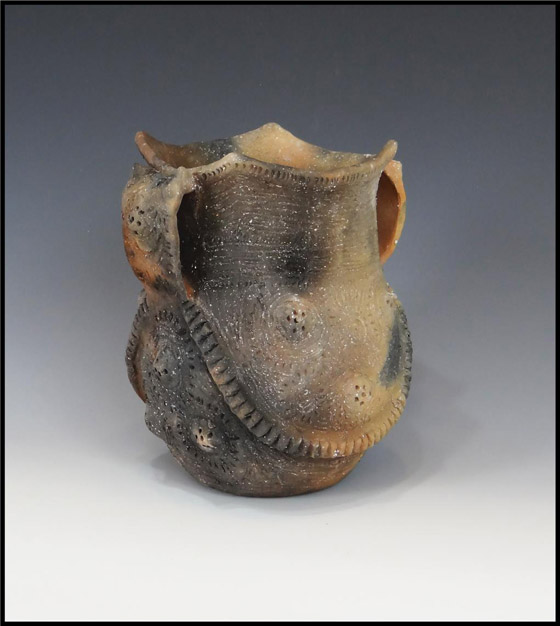 Traditionally Caddo pottery was made by hand, using locally available materials. The completed vessels were wood-fired in a pit (not a kiln) at relatively low temperatures.  Before the clay was modeled into its resulting shape, it was tempered with natural additives to keep it from shrinking and cracking during the drying and firing process.

Earles tempers his pottery clay with local river mussels, sand, or animal bone then he hand-coils the clay into form.  Once the vessel is allowed to dry to what potters call the “green-ware” stage, it is burnished by wetting areas of the outer surface and rubbing the exterior with a smooth river stone.[5]  Earles does not glaze his pottery, because burnishing results in a highly polished, glossy surface resembling glass that gives his pots an incredible shine after they are fired. 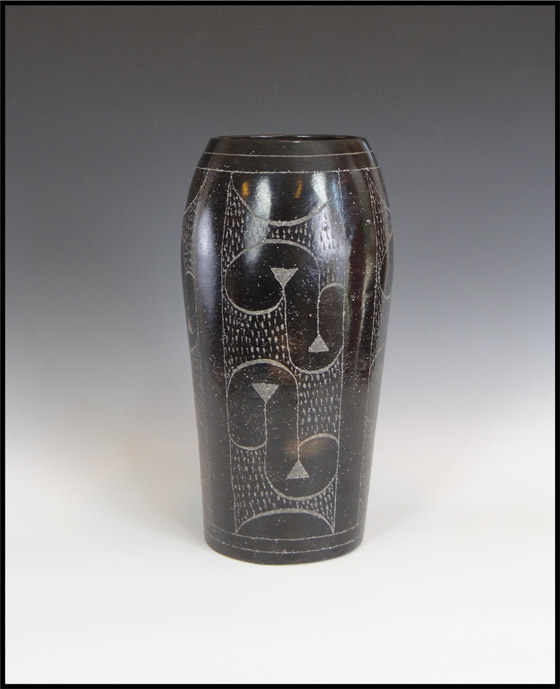 Prior to firing, however, Earles uses an awl to carve scrolls and other traditional designs into his pottery.  “The motifs include feathers, serpents, the sun and moon, and the Everlasting Fire,” says Earles, and are drawn from Caddo origin stories.  “What motivates me and challenges me to push the limits of describing our culture in my pottery is the desire to truly educate people about what sets our tribe’s [pottery] tradition apart from all other Southeastern [groups]…and it is [this] legacy that I wish to keep alive and advance by interpreting our ancient designs and symbols in a new and modern way using the methods and materials of our time.”[6] 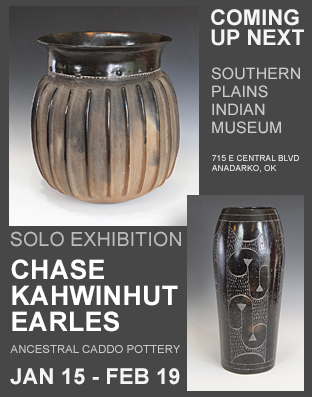 Earles’ exhibition pottery may be purchased by contacting him directly at Kahwinhut@gmail.com or through his personal website www.CaddoPottery.com.