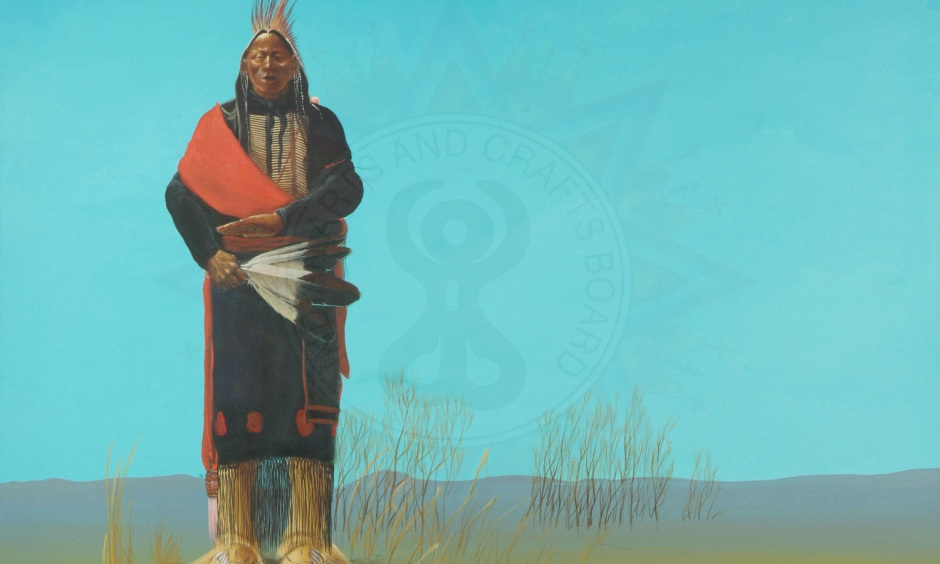 Mirac Creepingbear (1947-1990) was a self-taught artist deeply inspired by his Native American ancestry and beloved Southern Plains of Oklahoma.  Enrolled Kiowa, and of Pawnee and Arapaho heritage, Creepingbear was born in Lawton, Oklahoma, and spent his youth in Carnegie and Pawnee, Oklahoma.  Although he lacked formal art instruction, Creepingbear often sketched in his youth, eventually turning to painting full-time in 1974 after working as an electrical wireman.

Creepingbear’s colorful canvases were often inspired by the stories of family members who revered tradition and ceremony.  His painting style can be best described as realistic and spontaneous.  “I don’t have a set idea before I paint,” he said.  “I just have an image flash into my mind, and I relate it to my feelings. I paint fast to capture the mood in my paintings, before the image starts to change” (Maydew 1987).  Moreover, “Once I get started painting, something takes over.  I don’t know what it is. I don’t try to figure it out. I just roll with the punches” (Denton 1991:37).

During his career, Creepingbear exhibited widely and received numerous awards, including an Honorable Mention at the 34th Annual American Indian Artists Exhibition at the Philbrook Art Center (1979).  The Indian Arts and Crafts Board organized a special exhibition of his paintings at the Southern Plains Indian Museum (SPIM) in 1981, entitled Paintings by Mirac Creepingbear.  One of his featured paintings, A-HO (1981, 40 ½” x 30 ¾,” acrylic on canvas, A.81.8.1), was included in the exhibition.  In this colorful and dramatic work, Creepingbear depicts the image of a single warrior to convey the strength and tradition of the Kiowa people.  The brilliant turquoise sky is a symbol of hope and the embrace of eternal mysteries (cf. Whitney 1990).

In 1986, Creepingbear was selected, along with fellow Kiowa artists Parker Boyiddle and Sherman Chaddleson, to create the Kiowa murals housed in the Kiowa Tribal Museum, which translate the mythic tales and history of the tribe.  Comprised of ten six-by-eight-foot panels, Creepingbear’s contribution depicts the Kiowas’ journey from the north to the Southern Plains, the Sun Dance which was at the very core of Kiowa religious life, and the acquisition of the horse.  He also collaborated on the final panel in the series.

Although Creepingbear’s life was tragically cut short by illness, he will be remembered in the brushstrokes of his paintings as a force in Oklahoma Indian art history.  “In my work I try to show the strength and character of our people.  The feeling comes from the heart and my work reflects my feelings of pride for my people.  I feel that I am recording history, one person’s view about who we are” (SPIM 1981).

Whitney, Carol. 1990. “Letter to the Editor: A Tribute to Creepingbear.” The Anadarko Daily News. November 8.