PALAU – Doug Domenech, U.S. Department of the Interior Assistant Secretary, Insular and International Affairs, met today with Republic of the Marshall Islands President Hilda Heine while on travel in the Republic of Palau. Assistant Secretary Domenech is part of a high-level U.S. delegation from Washington, D.C. and U.S. Indo-Pacific Command who visited Chuuk to commemorate the 75th anniversary of Operation Hailstone in the Pacific, visited President Tommy Remengesau in Palau, and concluded their trip to the Pacific on Kwajalein and Ebeye Atolls in the Republic of the Marshall Islands (RMI). 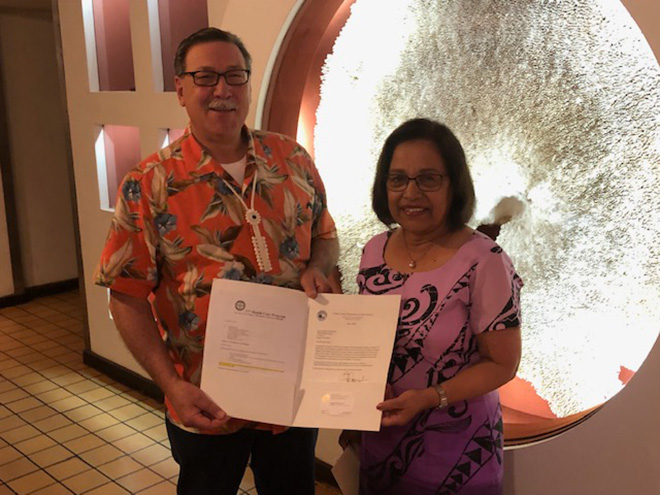 While meeting with President Heine, Assistant Secretary Domenech and other members of the U.S. delegation had the opportunity to discuss various issues of mutual importance. Assistant Secretary Domenech presented President Heine with $1,178,148 in grant funding to support the Four Atoll Healthcare program. In December 2018, Domenech provided an initial amount of $392,716 for fiscal year 2019. The current grant represents the remaining funds for FY 2019.

“We are proud of the history and cherish the relationships that Interior has had with the people of the Marshall Islands as part of the overall U.S.-RMI relationship,” said Assistant Secretary Domenech of their trip. “Through the Compact of Free Association partnership, we have improved and built schools, hospitals, utilities, and numerous other programs throughout the Marshall Islands. We are strong partners through the U.S.-RMI Joint Economic Management and Fiscal Accountability Committee and we continue to have fruitful collaboration for the future through the Compact Trust Fund for the People of the Marshall Islands,” he concluded.

The Secretary of the Interior is responsible for coordinating federal policy with respect to the territories of the U.S. Virgin Islands, American Samoa, Guam, and the Commonwealth of the Northern Mariana Islands, and administering and overseeing U.S. federal assistance provided under the Compact of Free Association to the freely associated states of the Federated States of Micronesia, the Republic of the Marshall Islands, and the Republic of Palau. The Assistant Secretary, Insular and International Affairs, executes these responsibilities, on behalf of the Secretary, through the Office of Insular Affairs whose mission is to foster economic opportunities, promote government efficiency, and improve the quality of life for the people of the insular areas.