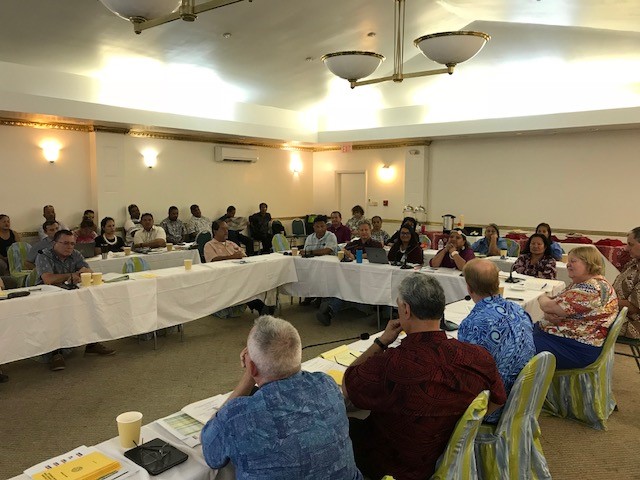 WASHINGTON – U.S. Department of the Interior Assistant Secretary, Insular and International Affairs, Doug Domenech this week applauded successes highlighted at the mid-year meetings of the Joint Economic Management Financial Accountability Committee (JEMFAC) held on March 21, 2019, in Majuro, in the Republic of the Marshall Islands (RMI).

“The Compact of Free Association partnership that we share has continued to provide important services and mutual benefits ever since we embarked on this special relationship nearly 35 years ago,” said Assistant Secretary Domenech. “We at Interior are happy to help support and facilitate the United States’ relationship with the Marshall Islands and are pleased to see the impacts for good.”

At the JEMFAC mid-year meeting, members were apprised of ongoing use of Compact sector grant funding in the Marshall Islands. In Fiscal Year (FY) 2019, as provided for under the Compact of Free Association, the RMI government received approximately $36 million in sector grant funding with an additional $16 million deposited in the Compact Trust Fund for the People of the Republic of the Marshall Islands. The U.S. Department of the Interior administers these funds.

As described in the Compact of Free Association (Compact), U.S. Public Law 108-188, the JEMFAC has several responsibilities, some of which are to review the following: 1) planning and budgeting documents for proposed Compact sector grant funding; 2) Single Audits; and 3) performance outcomes on the use of Compact funding. The primary sectors supported through the Compact are health, education, and public infrastructure.

The JEMFAC plans to reconvene in early September 2019 to review budget proposals and allocate Compact sector grant funding to support the RMI government during FY 2020.

Under U.S. law, annual single audits are required to monitor the overall financial management and use of Compact sector grant funding. The fiscal year (FY) 2017 Single Audit performed revealed that out of an approximate $36 million provided under the Compact in the same year, $397,814 were considered questioned costs. This number was increased from $29,458 in FY 2016, $30,155 in FY 2015, $12,921 in FY 2014, and $63,645 in FY 2013. U.S. Department of the Interior staff work closely with the RMI government, and all U.S. Insular Area governments, to address all questioned costs under the annual single audits.

RMI Ministry of Health officials provided an important update on their efforts to combat tuberculosis (TB) in the Marshall Islands. Having one of the worst rates of TB in the Pacific, the RMI has been working in close collaboration with the U.S. Centers for Disease Control and Prevention (CDC) to eradicate the disease with Compact health sector grant support. Last year, in FY 2018, JEMFAC granted the RMI government $1.1 million to conduct mass TB screening. They returned to report an astonishing 85 percent screening completion rate, finding 307 active TB cases, 4,897 latent TB cases, and 54 new cases of leprosy. To date, nearly 100 percent of the latent TB cases and 30 percent of the active cases have completed treatment. At this mid-year meeting, JEMFAC awarded additional support, in the amount of $1,110,431 for FY 2019, to complete the treatment for those screened and remove TB as a public health concern in the RMI.

“The RMI Ministry of Health has achieved a remarkably difficult task, and their success is a direct result of their preparation with traditional leaders, a focus on community outreach, and coordination with several RMI agencies and partners,” said Dr. Richard Brostrom, CDC TB Medical Officer for the U.S. Pacific Insular Areas, who attended the JEMFAC meeting. “Their work to protect over 4,500 people with TB prevention is of tremendous international interest and has set a new standard for the Pacific region. It is a big step towards a TB-Free Marshall Islands!”

In FY 2018, the RMI Ministry of Education received about $21 million in U.S. federal grants, which was a combination of Compact education sector grant funding, Ebeye Special Needs Grants also provided through the Compact, as well as Supplemental Education Grants and Special Education Grants both provided through the U.S. Department of Education. Combined, these funds account for approximately 87 percent of the RMI government’s annual K-12 education operating budget and 67 percent of the entire educational system, which includes the College of the Marshall Islands (CMI). In prior years, Compact education sector grants once accounted for a higher percentage of the RMI education budgets however, the RMI government has been increasing local revenue contributions.

The Marshall Islands has more than 14,000 students enrolled across 112 K-12 schools, all of which have been evaluated under the RMI government local accreditation policy. The RMI continues to work towards improving the reliability of data and the integrity of the accreditation system.

The RMI government has been successful in its use of Compact public infrastructure grants for health and education sector projects all throughout the Marshall Islands. Construction has either been completed or is ongoing on classroom buildings, administration buildings, and restroom facilities at 31 secondary schools and two high schools in Majuro and the outer islands such as Nallu, Mili, and Jaluit. The RMI has also renovated 18 health centers throughout the RMI. Under the Ebeye Special Needs and Kwajalein Impact Fund programs, seawall projects, sidewalk repairs, and water and sanitation projects are also either ongoing or completed such as basketball courts and a beach park on Ebeye (pictured below).

The Department of the Interior is responsible for overseeing U.S. federal assistance provided to the Freely Associated States of the Federated States of Micronesia, the Republic of the Marshall Islands, and the Republic of Palau under the Compacts of Free Association. Through the Office of the Assistant Secretary, Insular and International Affairs, and the Office of Insular Affairs these responsibilities are discharged on behalf of the Secretary of the Interior.