WASHINGTON – The U.S. Department of the Interior’s Office of Insular Affairs applauds the Association of Pacific Islands Public Auditors (APIPA) on completing its 33rd annual conference, held virtually from August 29 to September 2, 2022. More than 500 government financial accountability officials attended from all the Insular Areas and beyond.

Assistant Secretary Cantor shared welcome remarks by video encouraging the continued strengthening of accountability in the islands despite the challenges of distance and the recent pandemic. She also assured the participants of continued support of the Biden-Harris administration to address climate change, which continues to impact all of us at alarming rates, especially in the Insular Areas.

The APIPA 2022 conference provided training for auditing and financial accountability officials with participants having the opportunity to receive up to 20 hours of continuing professional education (CPE) credits, required by government auditing standards for auditors to maintain their professional competency. Thirteen (13) two-hour and four-hour courses were delivered during the conference in Plenary, Audit, and Finance tracks. The 2022 APIPA Conference, like prior years, showed excellent attendance. More than 507 participants joined the conference, expanding their skills in government auditing and financial standards, audit report writing, grants management, leadership, risk, and internal controls. In total, over 2,785 course certificates were awarded for 7,028 credit hours.

The APIPA virtual conference, was hosted this year by the Federated States of Micronesia (FSM) Office of the National Public Auditor and opened with remarks from FSM President David Panuelo encouraging participants to enhance accountability in their respective jurisdictions. APIPA Chair FSM National Public Auditor Haser Hainrick welcomed the attendees emphasizing the importance of maintaining core competences in accountability to better serve the government and the public. Also participating in the meeting was the Inspector General of the U.S. Department of the Interior, Mark Lee Greenblatt; Special Agent Karden Kelly of the Office of Inspector General; and the Hawaii State Auditor, Les Kondo.

Conference training was funded through the U.S. Department of the Interior’s Office of Insular Affairs and delivered by the Graduate School USA’s Pacific and Virgin Islands Training Initiatives.

The Assistant Secretary of Insular and International Affairs and the Office of Insular Affairs (OIA) carry out the Secretary of the Interior’s responsibilities for the U.S. territories of American Samoa, Guam, the Commonwealth of the Northern Mariana Islands, and the U.S. Virgin Islands. Additionally, OIA administers and oversees federal assistance under the Compacts of Free Association to the Federated States of Micronesia, the Republic of the Marshall Islands, and the Republic of Palau. OIA also administers a discretionary Technical Assistance Program for all the insular areas. Find information about OIA and its work on www.doi.gov/oia, Facebook, Twitter, Instagram, and YouTube. 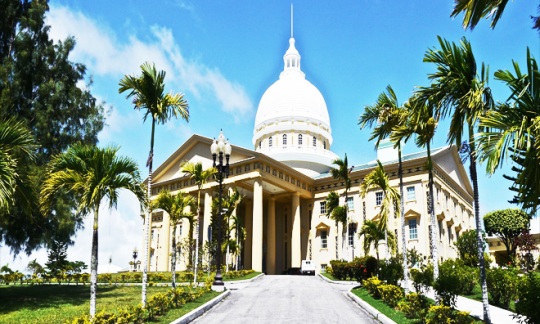