HOUSTON – On the floor of the Offshore Technology Conference, flanked by men and women who work on offshore oil and gas platforms, Secretary of the Department of the Interior Ryan Zinke today signed two secretarial orders aimed at unleashing America’s offshore energy potential and growing the U.S. economy.  The first order (text-PDF) implements President Trump’s Executive Order signed Friday and directs the Bureau of Ocean Energy Management (BOEM) to develop a new five-year plan for oil and gas exploration in offshore waters and reconsider a number of regulations governing those activities. The second order (text-PDF) establishes a new position – Counselor to the Secretary for Energy Policy – to coordinate the Interior Department’s energy portfolio that spans nine of the Department’s ten bureaus.

“Following through on the leadership established by President Trump, today's orders will help cement our Nation’s position as a global energy leader and foster energy independence and security for the benefit of the American people, while ensuring that this development is safe and environmentally responsible,” Secretary Zinke told industry representatives at the annual Offshore Technology Conference in Houston.  “We will conduct a thorough review of the Outer Continental Shelf (OCS) for oil and gas exploration and listen to state and local stakeholders. We also will conduct a thorough review of regulations that were created with good intentions but have had harmful impacts on America's energy security." 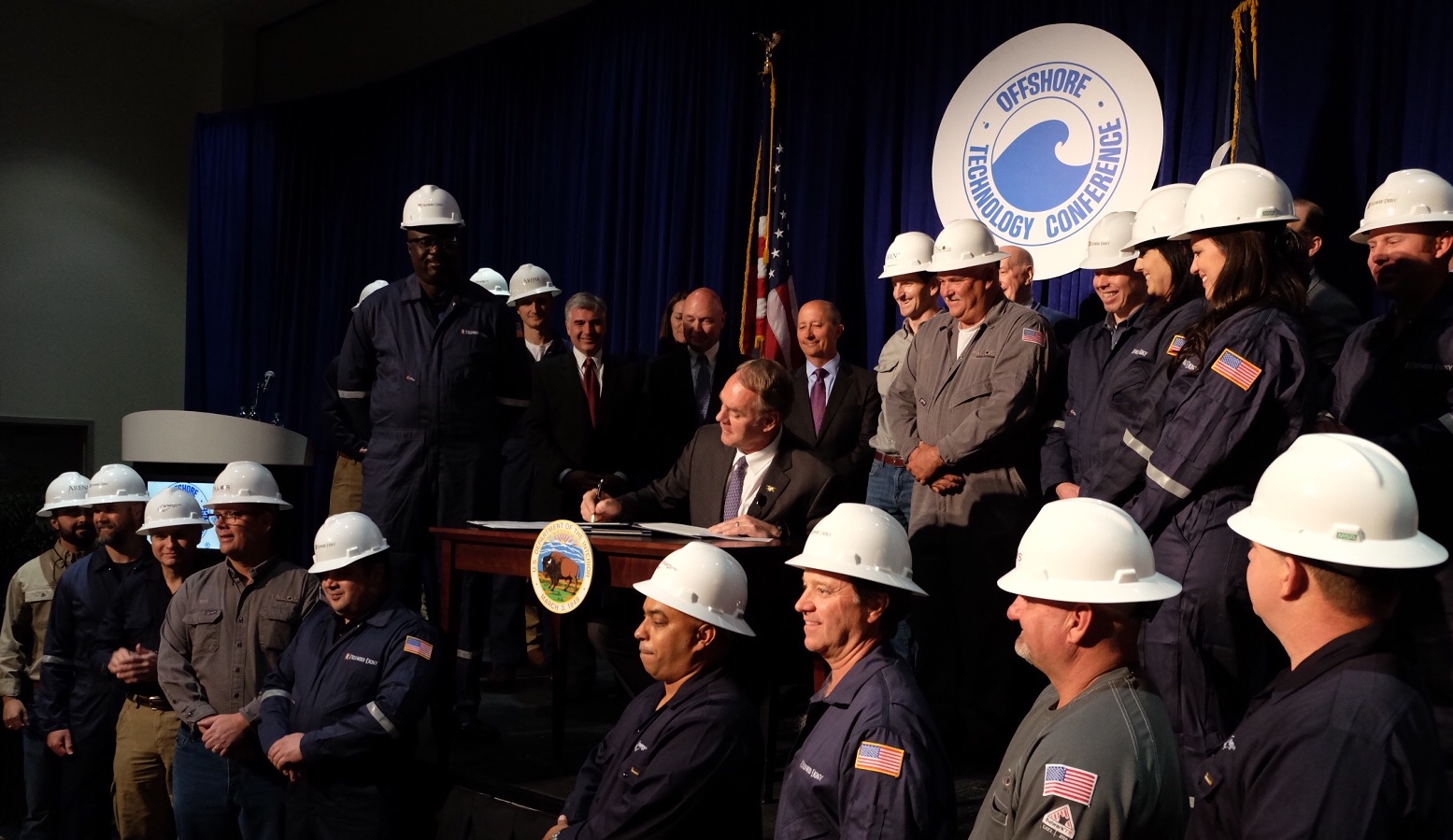 Secretarial Order 3350 directs BOEM to immediately develop a new “Five Year Outer Continental Shelf Leasing Program” with full consideration given to leasing the OCS offshore Alaska, mid- and south-Atlantic, and the Gulf of Mexico. It also directs BOEM to work with the Department of Commerce’s National Marine Fisheries Service to expedite authorization requests for seismic surveys, particularly for new or resubmitted permitting applications in the Atlantic to understand the extent of America’s energy potential. The Secretary’s order also directs prompt completion of the Notice to Lessees No. 2016-N01 dated September 12, 2016 and ceases all activities to promulgate the proposed “Offshore Air Quality Control, Reporting, and Compliance Rule. The order also directs BOEM and BSEE to review a host of other rules and report progress within 21 days.

“We're going to look at everything and make sure the policies are appropriate for each local community, rather than force a Washington-driven one-size-fits-all plan," said Zinke “There’s no predetermined map of development, but if there are areas that are acceptable, that have resources, and states and local communities support offshore development, we could include those area in the next 5-Year Program.”

As a featured speaker at the Offshore Technology Conference in Houston, TX, on Offshore Energy Policies: Harnessing the Full Potential of America’s Offshore, Zinke highlighted that OCS production currently accounts for about 18 percent of domestic crude oil and four percent of domestic natural gas supply. In Fiscal Year 2016, federal leasing revenues for the OCS were about $2.8 billion. By contrast, in 2008 federal leasing revenues for the OCS were nearly $18 billion dollars. “That’s a drop of more than $15 billion that would otherwise go to the Treasury or toward funding important conservation programs like the Land and Water Conservation Fund and the Historic Preservation Fund,” Zinke noted.

“Interior’s Bureau of Safety and Environmental Enforcement (BSEE) and Bureau of Ocean Energy Management (BOEM) will play vital roles in this expansive energy policy,” Zinke noted while discussing the importance of strengthening frontline staffs to help them work closer with industry and communities. “We are committed to fuller cooperation with the offshore industry and coastal communities to expand responsible energy development while holding industry accountable to strict safety and environmental protections.”

BSEE engineers work with offshore operators to carefully review and introduce new technology and ensure that operations remain safe and are conducted responsibly. BSEE inspectors conduct more than 19,000 inspections a year to ensure the safe and environmentally responsible operation of nearly 2,400 offshore oil and gas drilling and production facilities and 27,000 miles of pipeline.