WASHINGTON – U.S. Interior Secretary Ryan Zinke praised President Donald Trump for signing the 2018 Omnibus Funding Agreement which included $123 million in funding through 2024 for the 2010 Palau Compact Review Agreement as agreed to between the United States and the Republic of Palau.

“On behalf of Palau, I am very happy that the U.S. Congress and President Trump have funded the 2010 Palau Compact Review Agreement demonstrating the continued U.S. commitment to Palau and the Western Pacific region,” said Secretary Zinke.  “The agreement is an important element of the Pacific national security strategy to maintain stability in the Western Pacific Region.  Interior has held a long, historic relationship with Palau and other U.S.-affiliated Pacific Islands and we look forward to continuing our role on behalf of the U.S. Government in providing these funds to the Government of Palau,” continued the Secretary.

“We will be working closely with the State Department and other federal partners to move forward as quickly as possible,” added Assistant Secretary – Insular and International Affairs – Doug Domenech.

The U.S. and Palau Governments will need to meet to update the funding schedule of the 2010 agreement which required specific annual outlays of funds.  Included in the assistance are contributions to the Palau Compact Trust Fund, a capital improvement program, and an infrastructure maintenance plan.  The specifics of disbursements must be reaffirmed by the parties prior to implementation of the agreement.

The Secretary of the Interior is responsible for coordinating federal policy with respect to the territories of the U.S. Virgin Islands, American Samoa, Guam, and the Commonwealth of the Northern Mariana Islands, and administering and overseeing U.S. Compact federal grants provided to the freely associated states of the Federated States of Micronesia, the Republic of the Marshall Islands, and the Republic of Palau. On behalf of the Secretary, the Assistant Secretary for Insular and International Affairs executes these responsibilities through the Office of Insular Affairs. 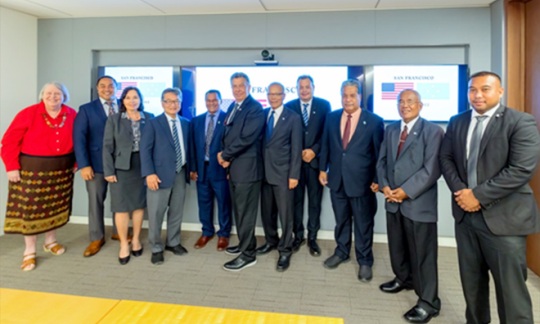