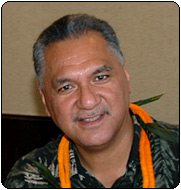 Nikolao Pula is the first individual of Samoan ancestry ever to serve as a Career (Senior Executive Service) Director of the Office of Insular Affairs (OIA) of the Department of the Interior in Washington, D.C. As the Director of OIA, Mr. Pula carries out the Secretary's responsibilities in the U.S. territories and the freely associated states. OIA is the Executive Branch's liaison with four of the five principal U.S. territories (American Samoa, Guam, the Commonwealth of the Northern Mariana Islands and the U.S. Virgin Islands) and the three freely associated states (the Marshall Islands, the Federated States of Micronesia and Palau).

As the Director of OIA, Mr. Pula is responsible for the general policies regarding insular affairs and oversight of Federal activities. In addition, Mr. Pula chairs the U.S.-Federated States of Micronesia Joint Economic Management Committee, the U.S.-Marshall Islands Joint Economic Management and Financial Accountability Committee and the Federated States of Micronesia and Marshall Trust Fund Committees, the last including membership by Taiwan.  During his tenure with OIA, he has also served as a policy desk officer (August 1993-July 2000) and Acting Director (1999-2002).  Prior to his tenure with DOl, Mr. Pula worked for eleven years on Capitol Hill as a special assistant to Senator Daniel K. Inouye of Hawaii, legislative assistant to Congressman Fofo I.F. Sunia of American Samoa and staff director of the Subcommittee on Public Building and Grounds of the House Committee on Public Works and Transportation; he also worked for the Senate Sergeant-at-Arms.  Serving as Acting Assistant Secretary for Insular Areas since this past January 20th, Mr. Pula has held that position as well January-September 2009 and January-February and July 2014.

A graduate of the Marist Brothers' School in American Samoa and Menlo College in Atherton, California, Mr. Pula has pursued further studies at Brigham Young University in Provo, Utah, and George Mason University in Fairfax, Virginia.  Mr. Pula makes his home in Annandale, Virginia, with his wife, Lois Phillips-Pula, Ph.D., a professor in the Georgetown University School of Nursing.