Revealing Our Planet Through Earth As Art

Sometimes you need a new perspective to see something in a whole new way. With satellite images from the U.S. Geological Survey, science and art combine to showcase the beauty and wonder of our planet.

USGS’s Earth Resources Observation and Science Center operates the Landsat satellite program with NASA and maintains a collection of millions of images of Earth from above. As part of their Earth As Art collection, USGS scientists are revealing the planet's changing land surface in ways our eyes can't see -- in colorful satellite images with creative combinations of visible and infrared light. These unreal views of farmland, rivers, mountains and icy landscapes are not only mesmerizing, they also show us the science of Earth’s land features.

Scroll down to see some of our favorite images that combine art and science to unveil our planet in ways we’ve never seen. 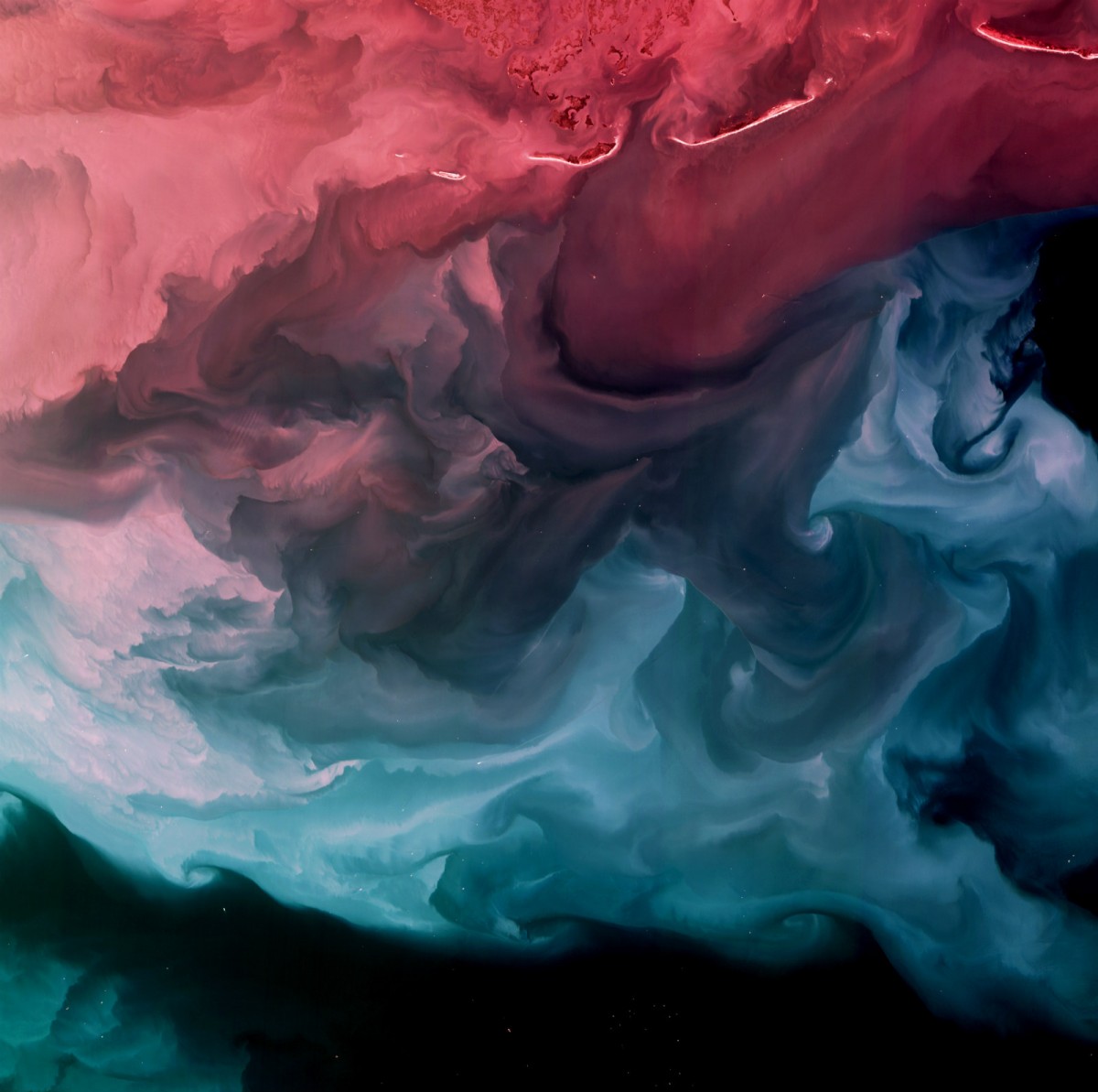 While this might look like an abstract painting of swirling reds, blues and grays, it’s actually a satellite image of the Gulf of Mexico. Taken from off the coast of Louisiana, this image shows the sediment in the Gulf with the red representing coarse sediment near the surface of the water and the darker blues representing finer grain sediment. The patterns are caused by a number of factors including the current, wind and water depth. 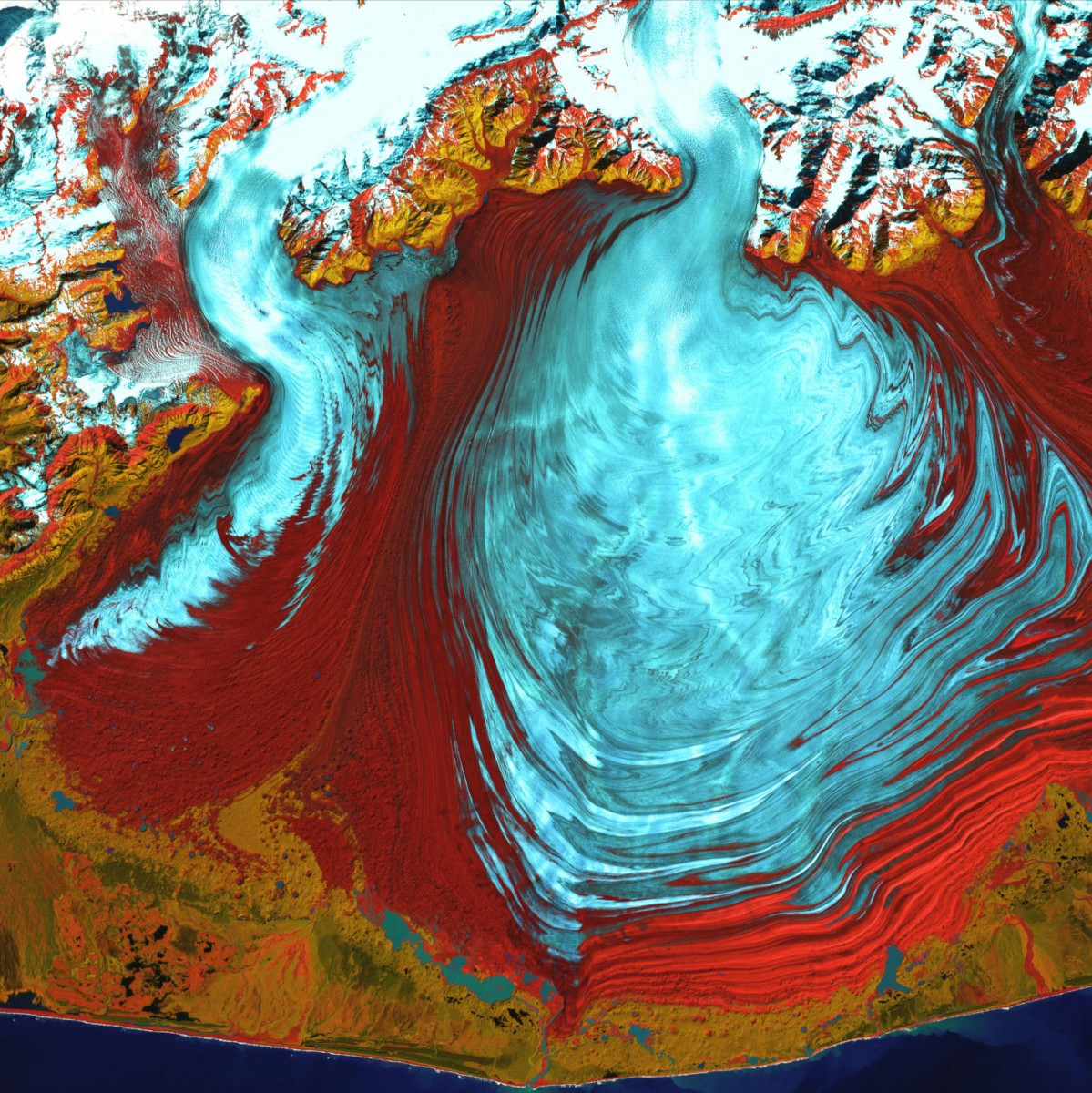 Malaspina Glacier, located primarily within Wrangell-St. Elias National Park & Preserve in Alaska, is the largest piedmont glacier in North America. Covering more than 1 million acres, this massive sheet of ice is larger than the state of Rhode Island. Named for a Spanish explorer, it’s a great example of something so large that you really need to get some distance from it to see it all. Outer space is pretty far. Thanks, Landsat! 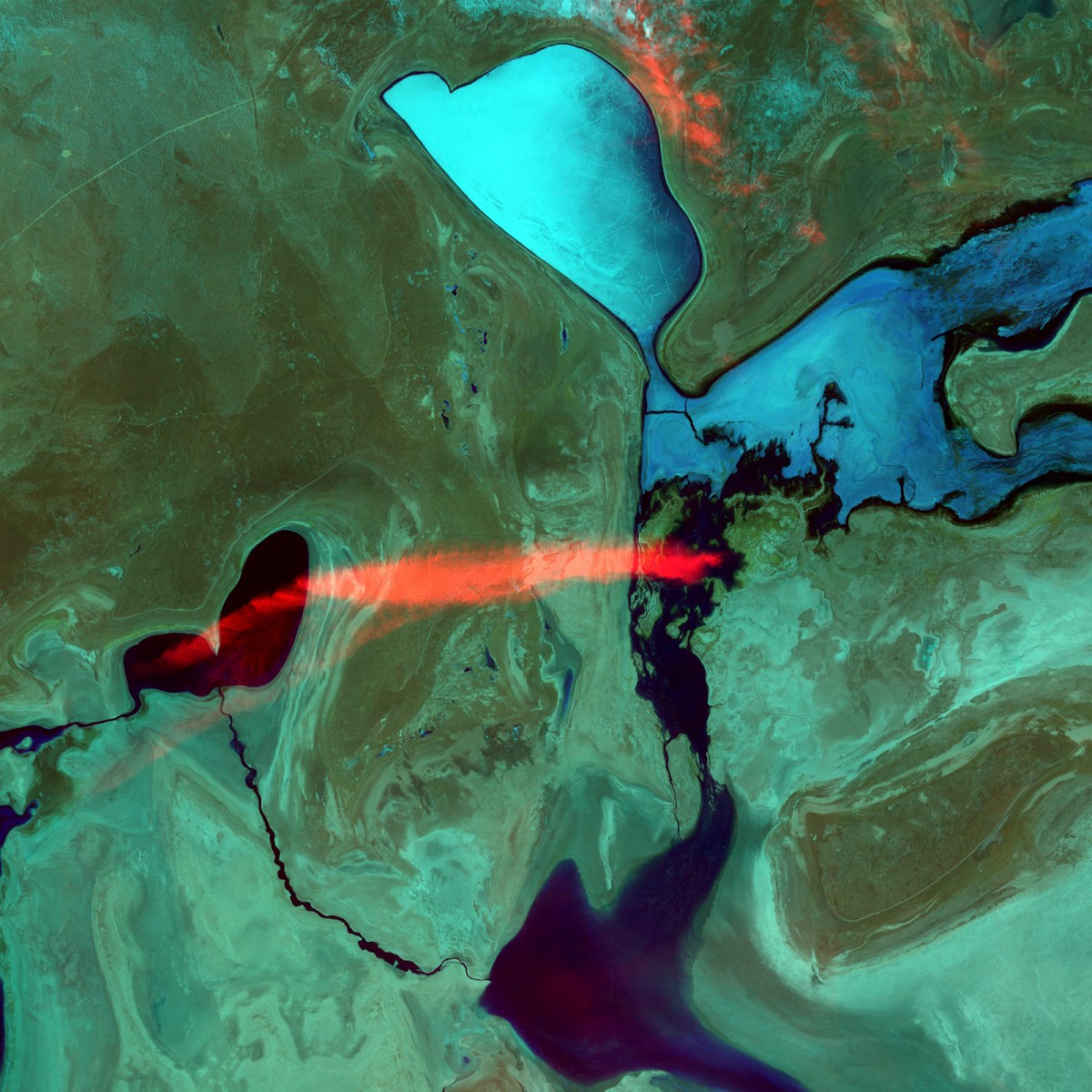 What do you see in this image? USGS scientists thought it looks like a heart with a feathery red streak across it. The heart is actually part of the Aral Sea in Kazakhstan as seen from hundreds of miles above the Earth’s surface, and that translucent red paint stroke isn’t actually a feature of the land. It’s a cirrus cloud, which is normally invisible in natural color imagery but was detected by Landsat 8’s cirrus band. While these high altitude, cold and wispy clouds are hard to detect, this sensor allows scientists to screen for cirrus clouds in the image and correct for them in the data. 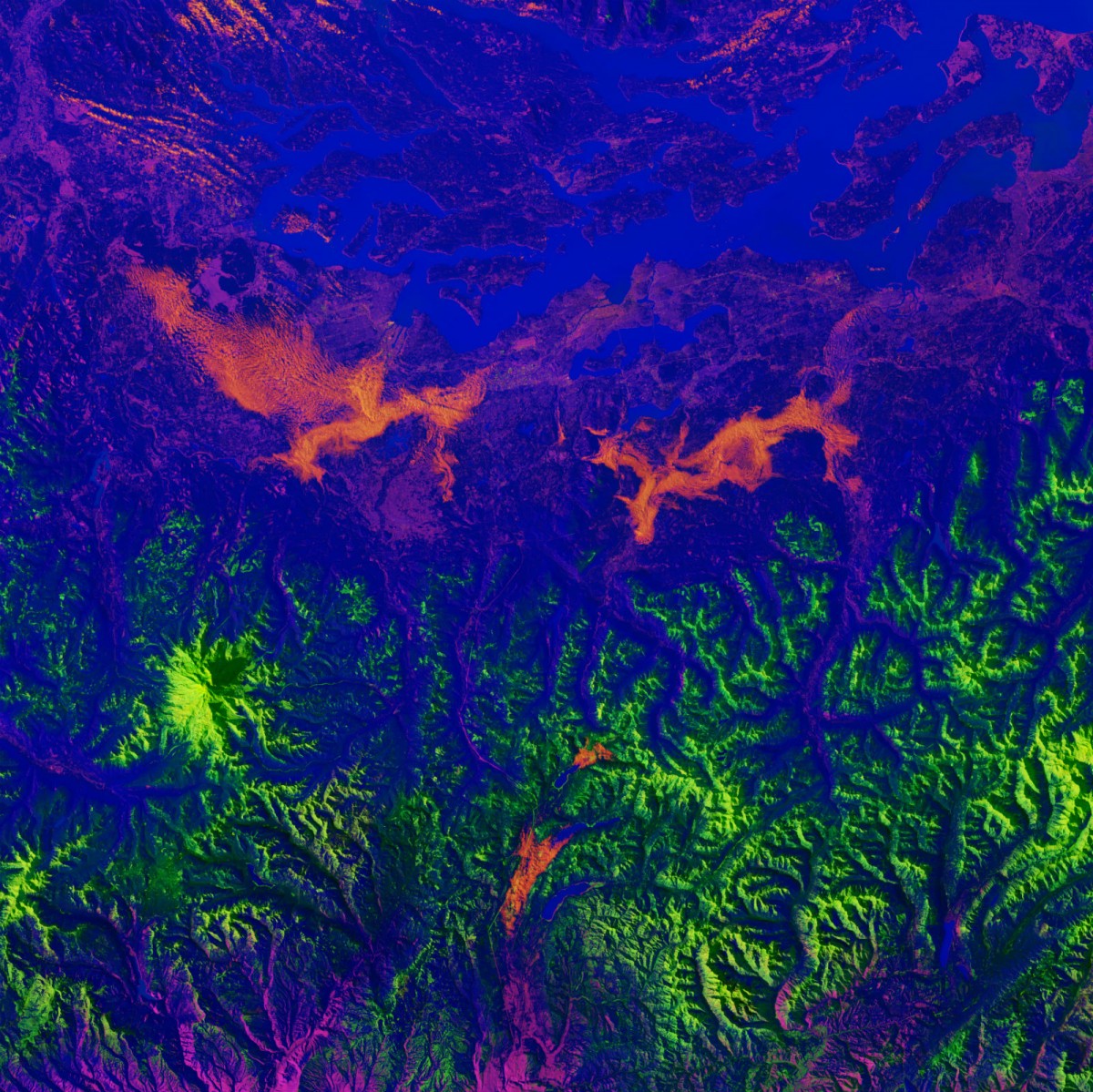 Fluorescent colors dominate this dreamy abstract scene over the Pacific Northwest. The orange shapes look like glowfish in a fanciful underwater world, but in reality, they’re clouds. The neon green shows the rugged mountains of the Cascades Range. In the lower left, you can see Mount Rainier, a 14,410-foot tall active volcano that stands as an icon in the Washington landscape -- whether it’s viewed from land or space. 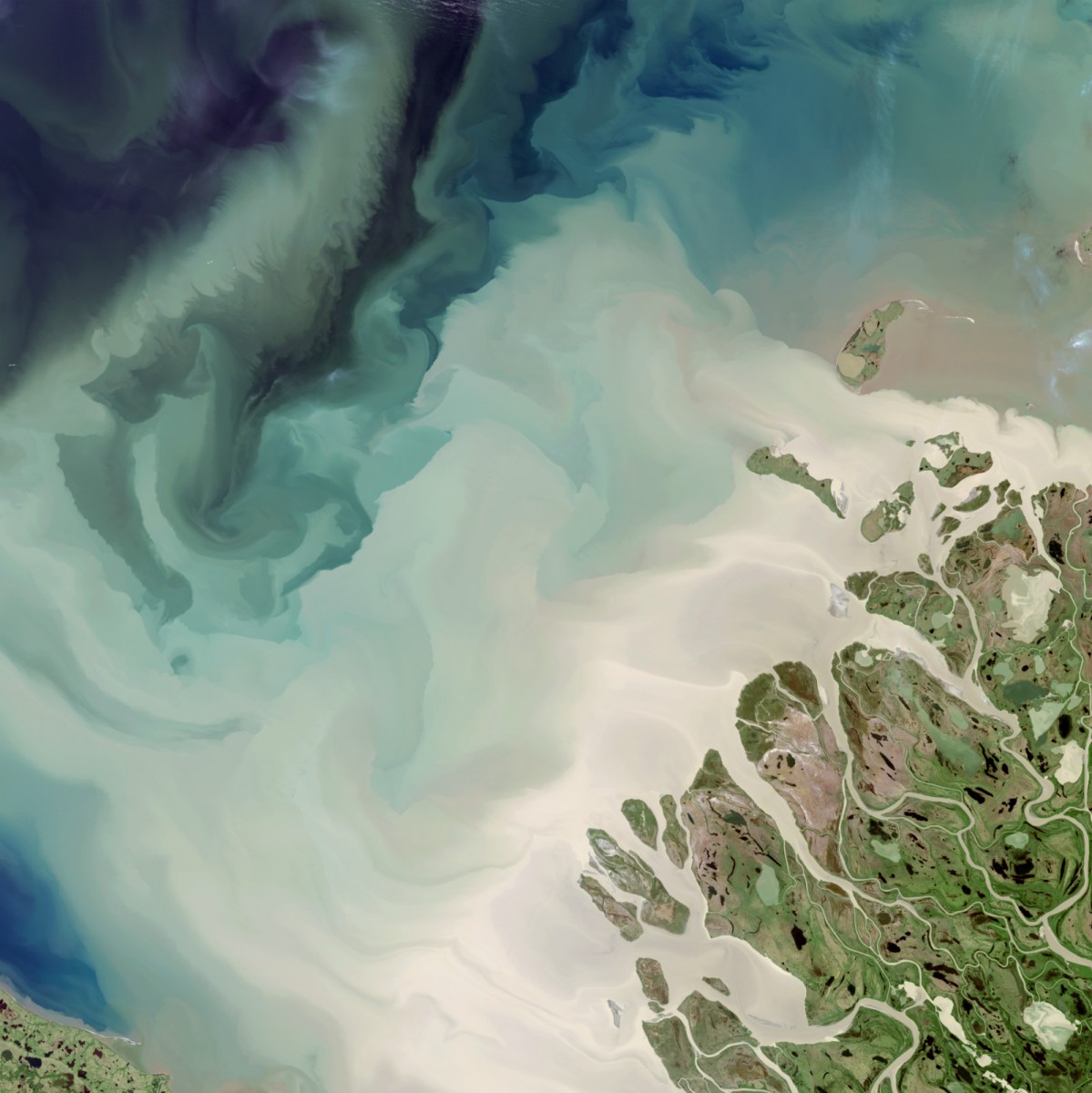 On the top of the world, the longest north-flowing river in North America pushes waves of sediment into the cold waters of the Beaufort Sea. The Mackenzie River collects huge amounts of soil and sand as it travels across northern Canada, fed by rain and snowmelt. From space, it’s easy to see how the sediment clouds the water and forms ripples and swirls as it’s dispersed by the currents. It’s a natural watercolor! 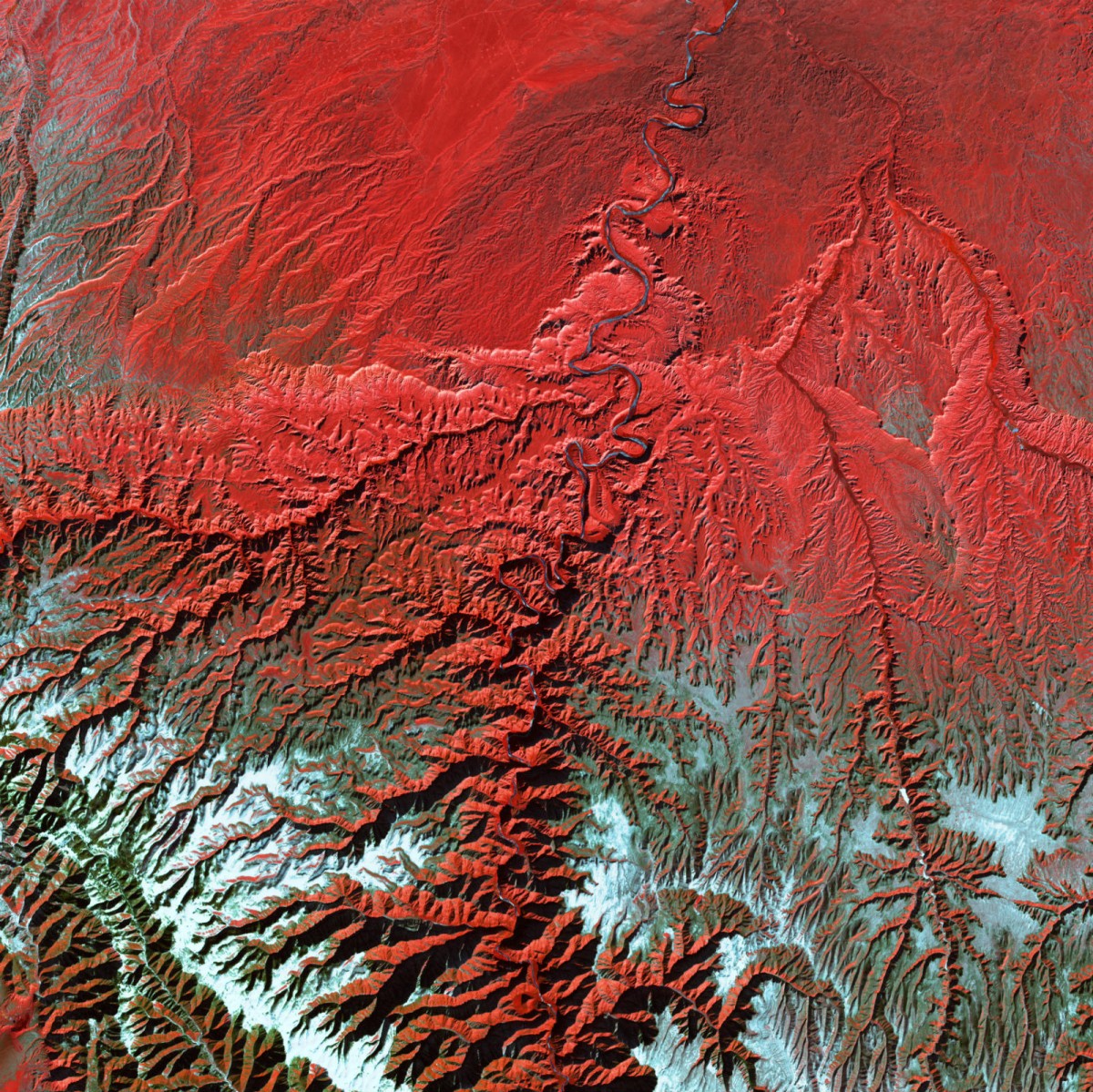 One of the most remote areas in the lower 48 states, Desolation Canyon lies between Dinosaur National Monument and Canyonlands National Park along the Green River in Utah. Nearly as deep as the Grand Canyon, its countless branches are still home to several Native American tribes. The color changes in the satellite image reveal the impressive changes in elevation. 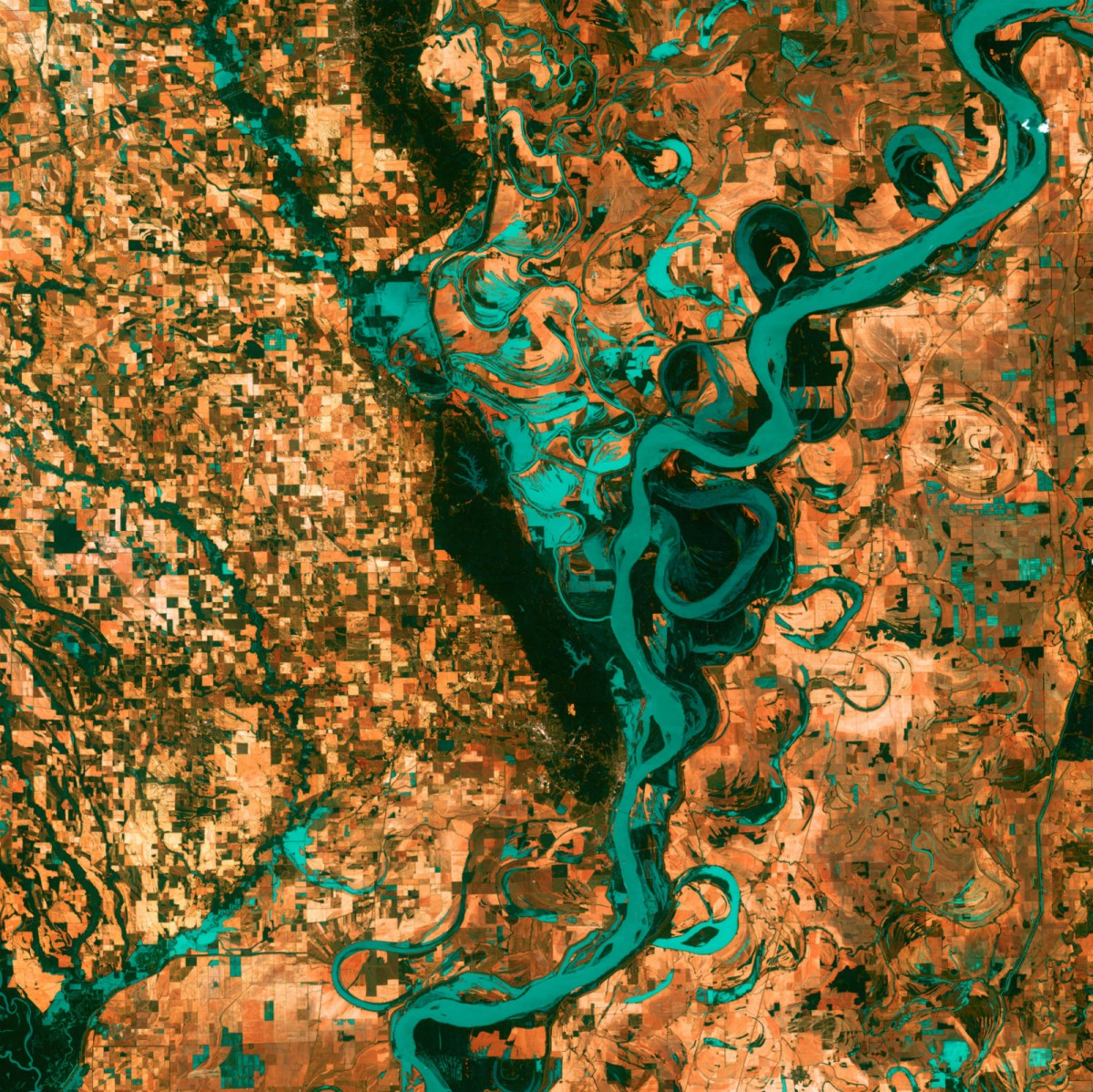 Looking down on the mighty Mississippi River, it’s fascinating to contrast the curving lines of nature with the lines and grids marking human development. It’s like a snake slithering over a checkerboard. Countless oxbow lakes and cutoffs accompany the meandering river south of Memphis, Tennessee, as it flows past farms and roads on the border of Arkansas and Mississippi. 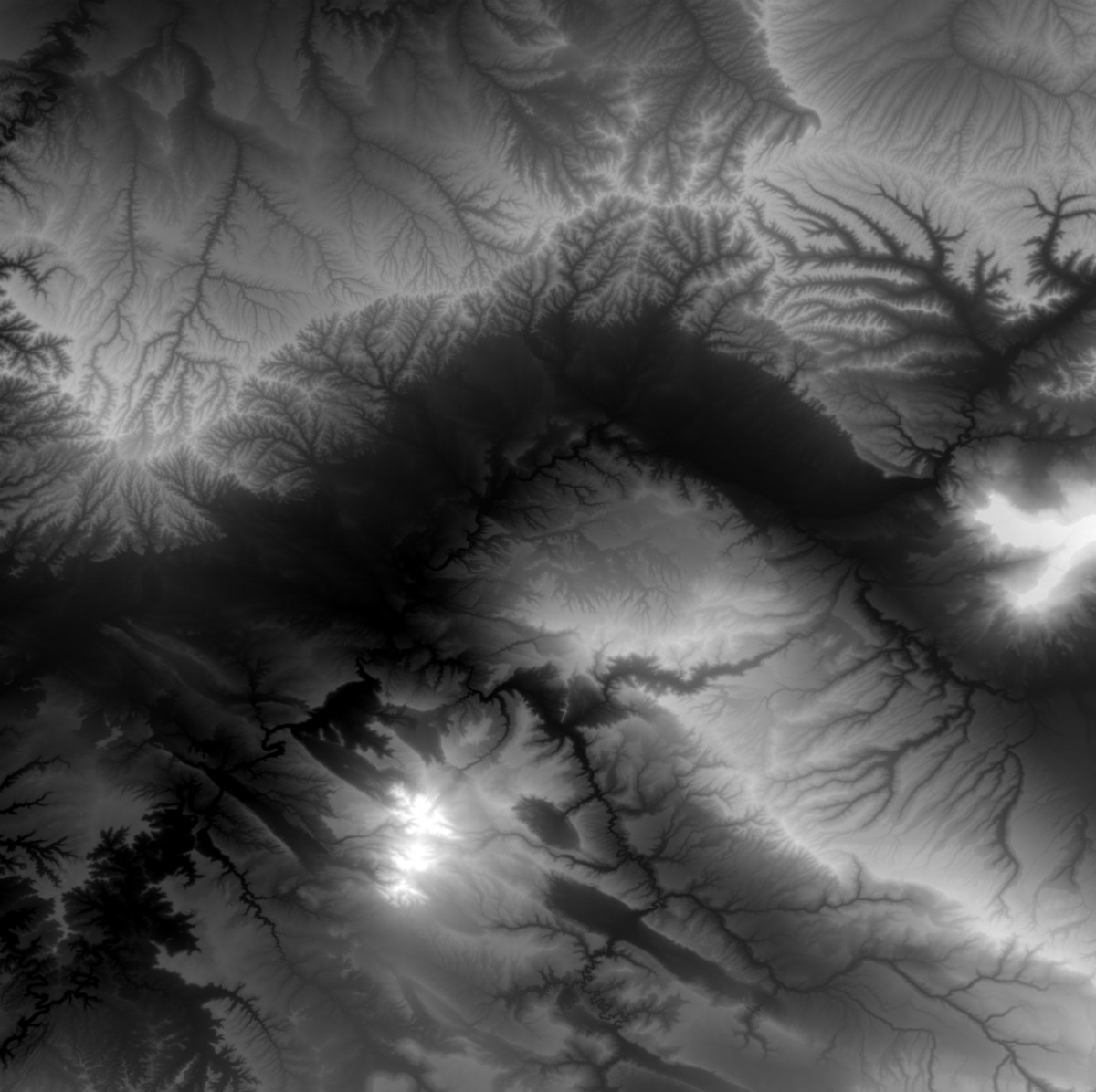 Like spectral lights glowing in a fog on a dark night, this image ranges from the deepest black to the brightest white. Instead of ghosts, it’s actually showing elevation. This satellite shot visualizes the tremendous differences in height of mountain peaks and alpine valleys in the Rocky Mountains of Colorado and Utah. 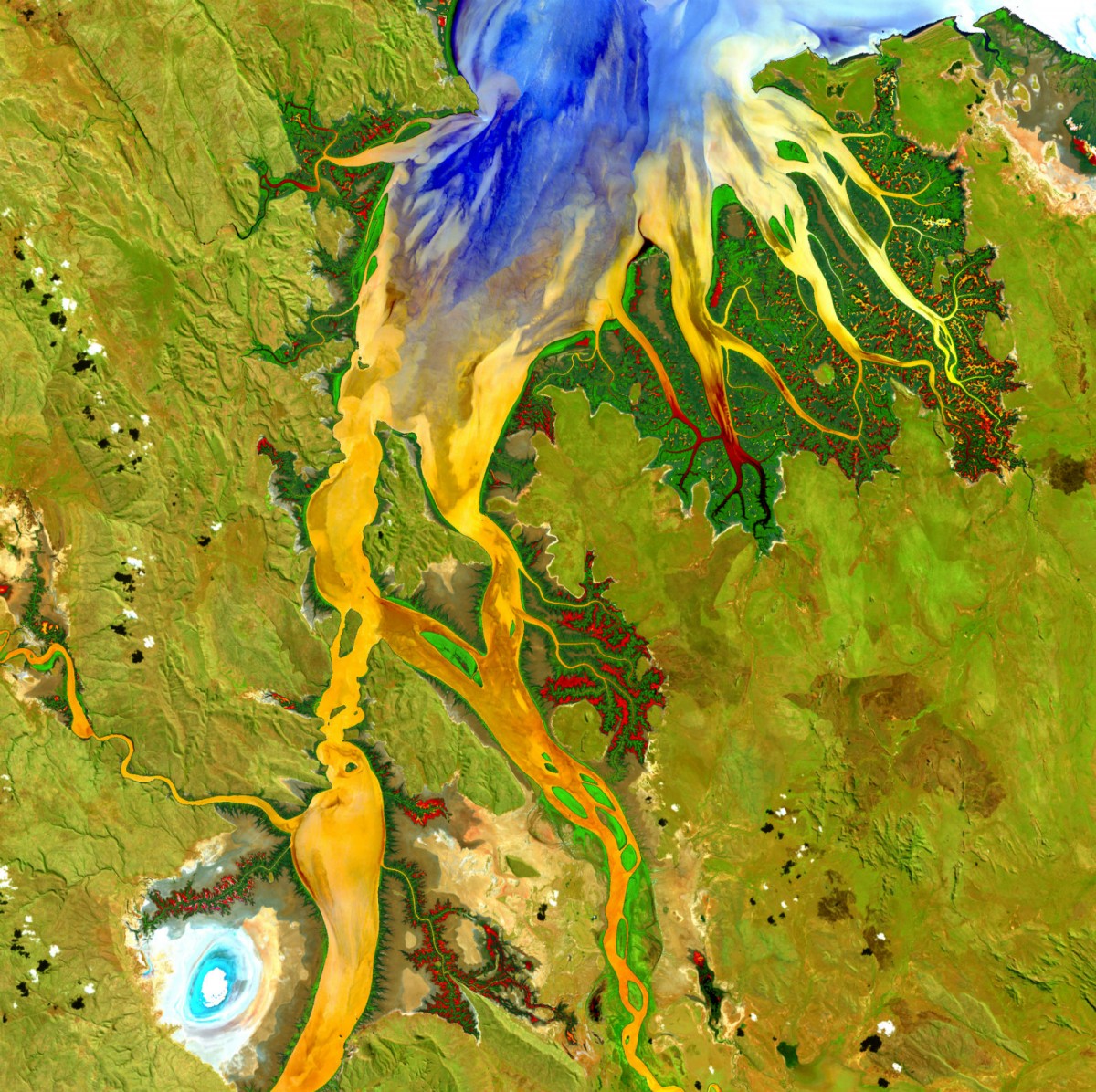 The Ord River stretches like tree roots across the landscape of Western Australia. It’s a biologically complex area that’s made even more visible from space. The yellow, orange and blue show the impressive flow patterns of sediment and nutrients in this tropical estuary, while the dark green surrounding the river offshoots are mangroves. In the lower left of the image is a bright spot that is an area of mudflats, which is home to saltwater crocodiles. Even in this image, you can tell that this area is teeming with life.